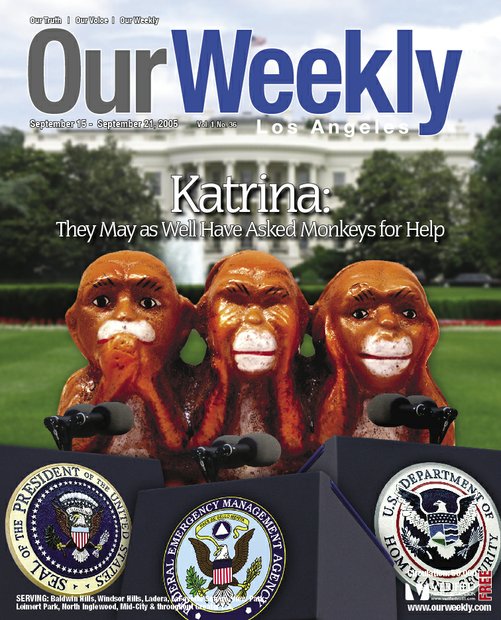 A meeting was held in our publisher’s office to discuss the issue of how the federal government’s handling of Katrina was a complete blunder. Once the publisher gave direction on editorial content, author William Covington removed a paper weight fashioned after “three wise monkeys” from the publisher’s desk and said, “I have our cover.” 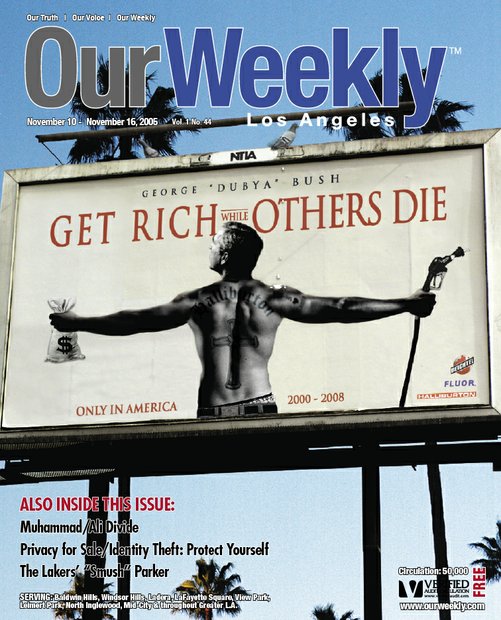 During the Vietnam War, the defense industry grew and prospered while Black ghettos suffered. In this issue, the Iraq war created the same social dynamics. At this time, community activists were “raising hell” about a new movie “Get Rich or Die Trying” starring Curtis Jackson. This cover has George Bush fashioned after rapper 50 Cent.This cover went viral, receiving repsonses from as far away as Japan. Corporate logos were added to represent Fortune 500 companies that were profiting from the war. The defecating pigeon was added for humor. 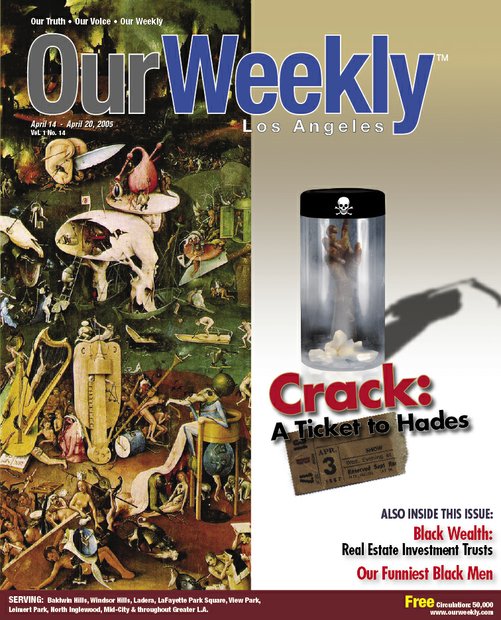 The left panel illustrates “Hell” and the painting is by Hieronymus Bosch. It depicts a world in which humans have succumbed to temptations that led to evil and eternal damnation. Inspiration for the cover came from a memory author William Covington had driving down Central Avenue between 54th Street and Vernon Avenue. during the crack epidemic. That night Central Ave and Bosch’s Hell were parallel worlds, Covington thought. The right panel depicts a specimen jar containing a disease causing-vector, called “crack,” responsible for wiping out a race. 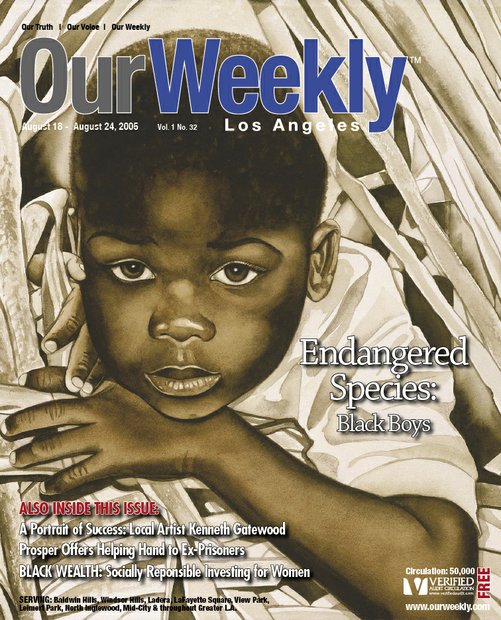 African American boys have been hunted by slavers, racists, Black and Hispanic gangs, and law enforcement. The cover, painted by artist Kenneth Gatewood, represents an endangered boy using mimicry, an instinctive behavior animals use to blend into an environment and hide.The boy appears to be resting before again being pursued by his predators. His brown skin is his camouflaged among the surrounding brown foliage. 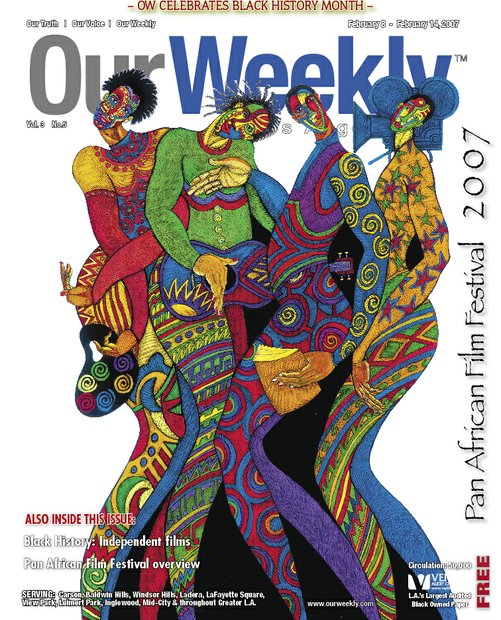 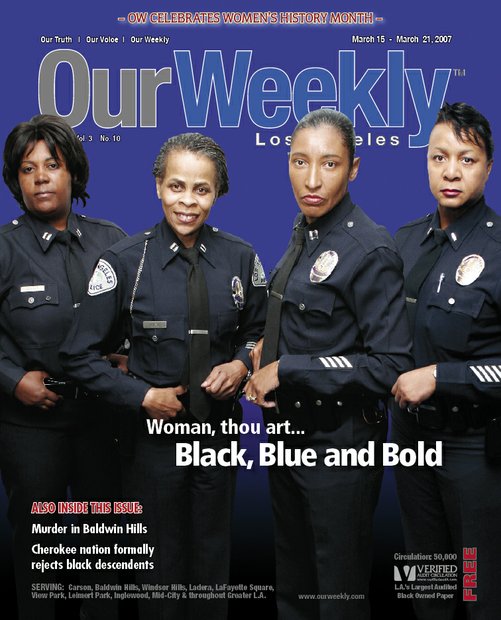 The Los Angeles Police Department (LAPD) has played a pivotal role in opening the door for women to become police officers. In 1910, the agency promoted the first female police officer with full power. This act made Alice Stebbins Wells the first police woman in the United States. Six years later, under pressure from Black women’s groups in the city, Georgia Ann Robinson was hired as the first African American female officer. Inner-city schools requested additional copies of this issue to be used as a tool to empower young girls. 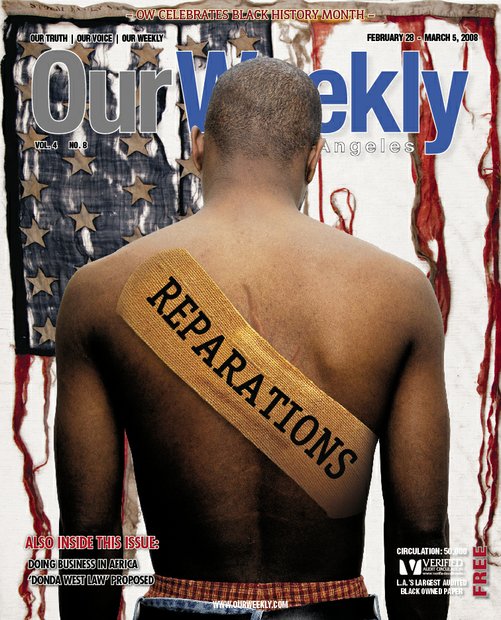 Although OW agrees that reparations for slavery are deserved and long overdue, this cover served to say that anything we recieve would only be placing a band-aid over a clot-less, a festering wound. 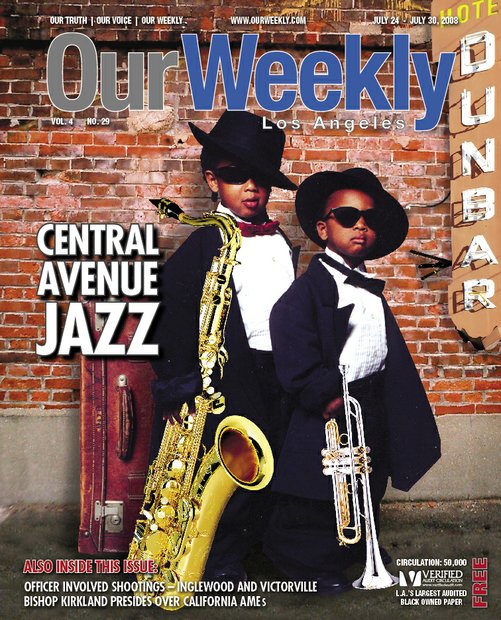 This “Funky Blues Brothers,” cover was created using a photo the publisher had on her desk of her two sons. It was borrowed without her knowledge, elements were added to the photo, and the rest is history. She now locks her office. 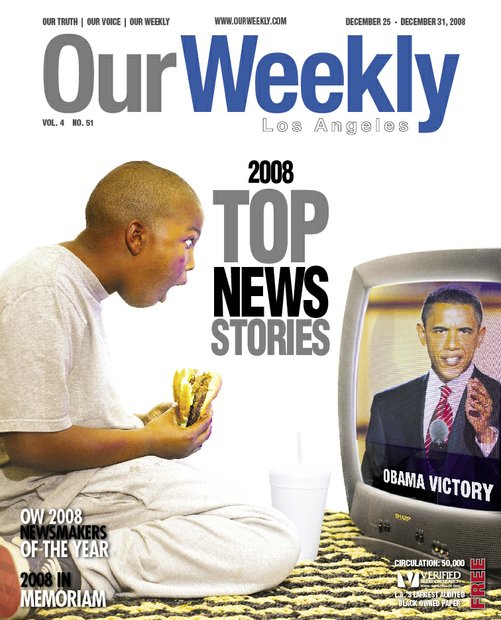 This sandwich was purchased from Earlez Grill, which made the photoshoot very difficult because the model was more concerned with eating the prop than posing. We had to take the sandwich and hold onto it until we had the right pose. 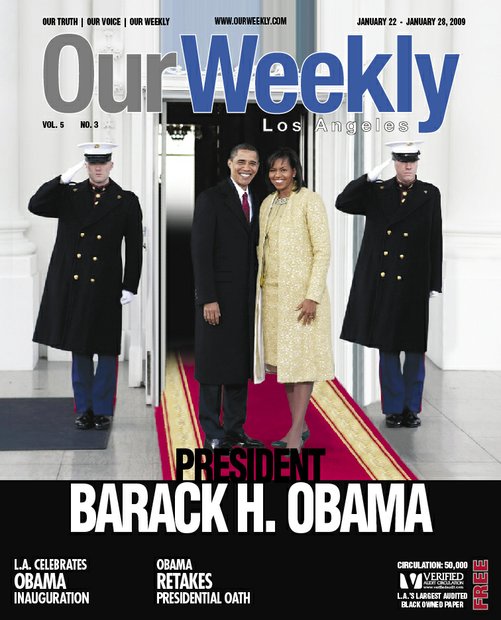 Wanting the best presidential inauguration photo forced us to build it.This involved removing George and Laura Bush from the interior of the White House, replacing them with Barack and Michelle Obama and cloning the marine guard. 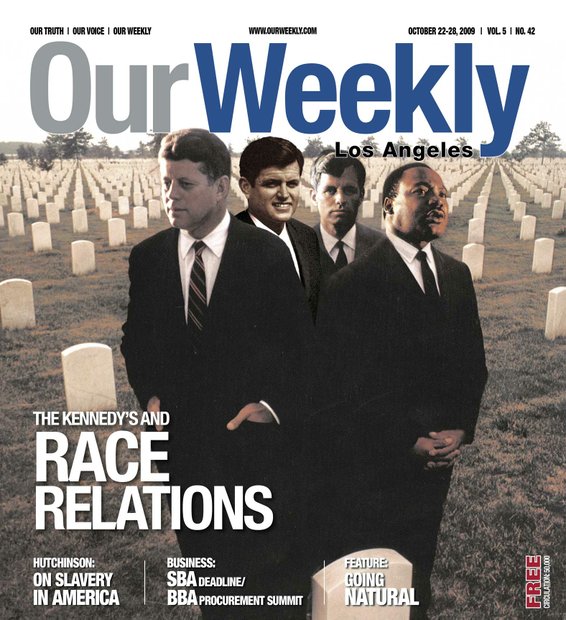 With the passing of Ted Kennedy, a cover story was written about how the Kennedys really felt about Blacks. The cover was fashioned after a graphic created by George Lois. 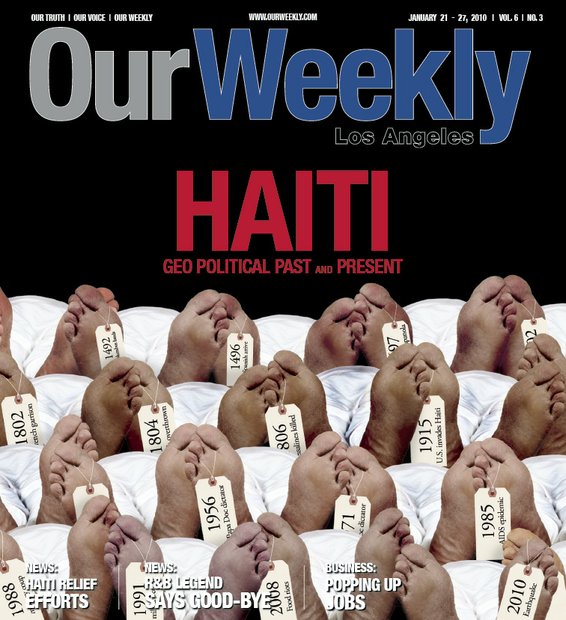 As wars and revolutions continued to claim lives of Haitians, this cover was created to depict a makeshift morgue, which are common in existence in Haiti. 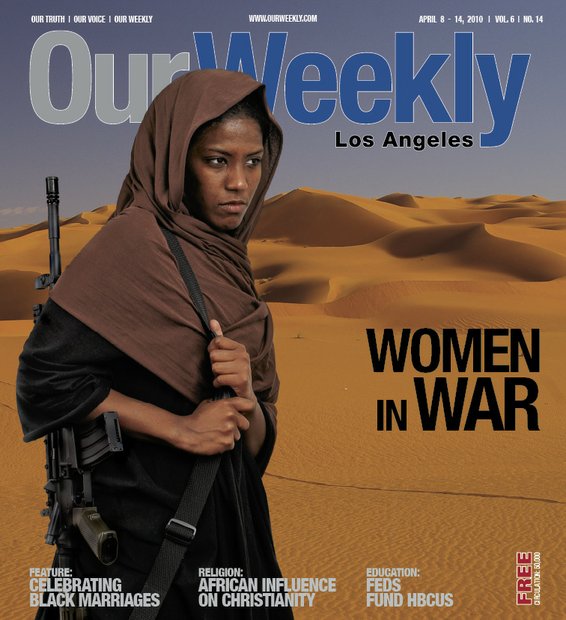 This cover was shot in house and the weapon was an actual AK-47 from the collection of Tony Ostermeier. Women in the military have a history that extends over 3,000 years into the past, throughout a large number of cultures and nations. 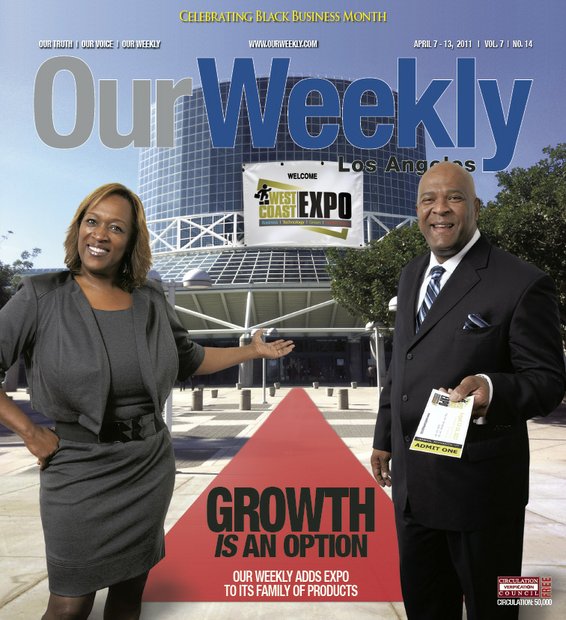 The child holding the gun and draped by the American flag was used to depict oppression and how our learning institutions are creating young shooters. A result of inner-city institutions that are under funded. 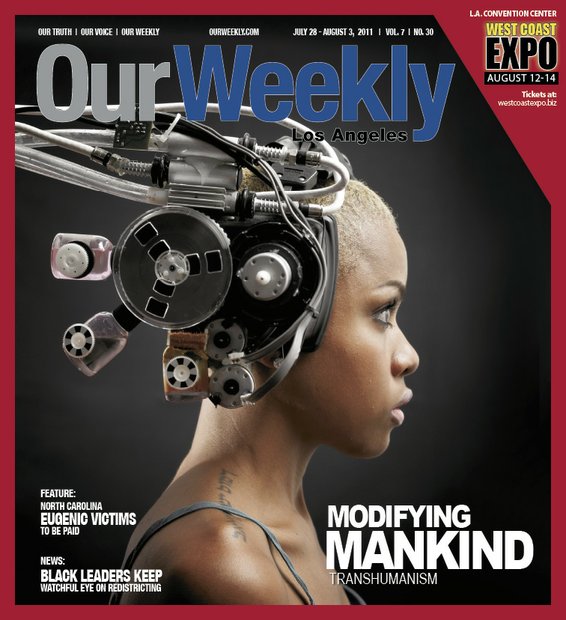 Inspiration for this cover came from a Cornell University study which stated that the Black gene is dominant. This photo is OW’s interpretation of what humans of the future will look like. The headgear was made from an old pair of headphones, VHS tape spool, television parts, and printer ink cartridges. It was used by the Smithsonian Magazine as cover art and was designed by William Covington. Model is Star Brown. 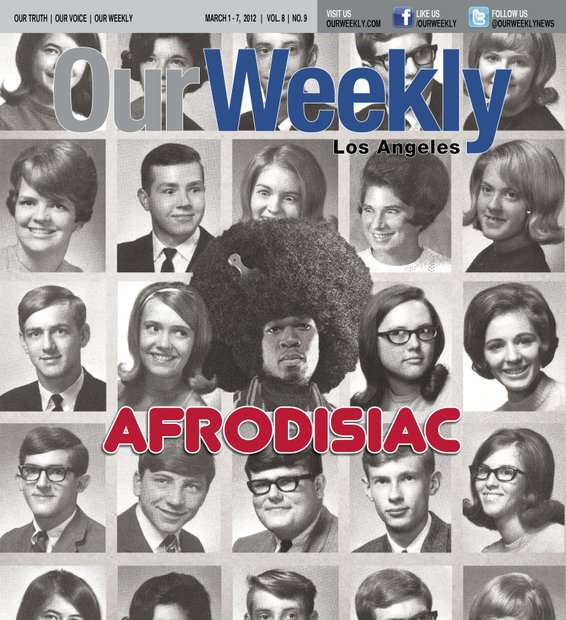 OW took 50 Cent, gave him a “super fro” and put him right in the middle of a Nebraska High School yearbook from the 1960s. We readjusted the eyes on a few of the female ‘classmates’ and it made the history of the Afro cover story a classic. 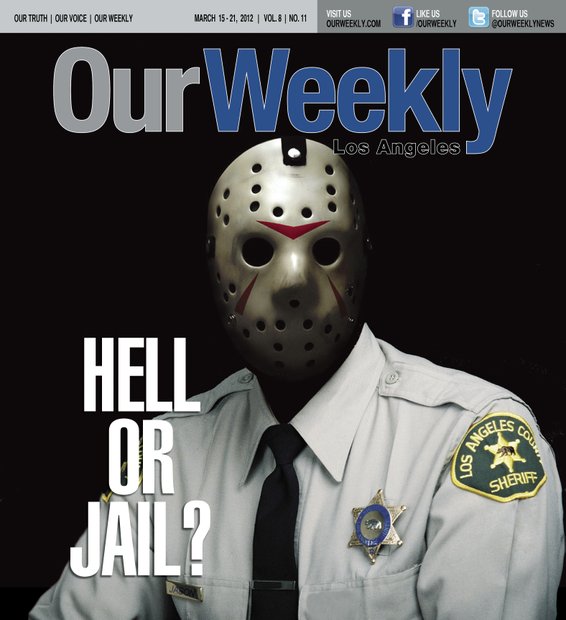 Newspapers are very important to individuals who are incarcerated. One newspaper will typically be read by 10-15 inmates. When an issue is missed, we receive lots of questioning mail. It appears this issue never made to the Peter Pitchess Honor Ranch. 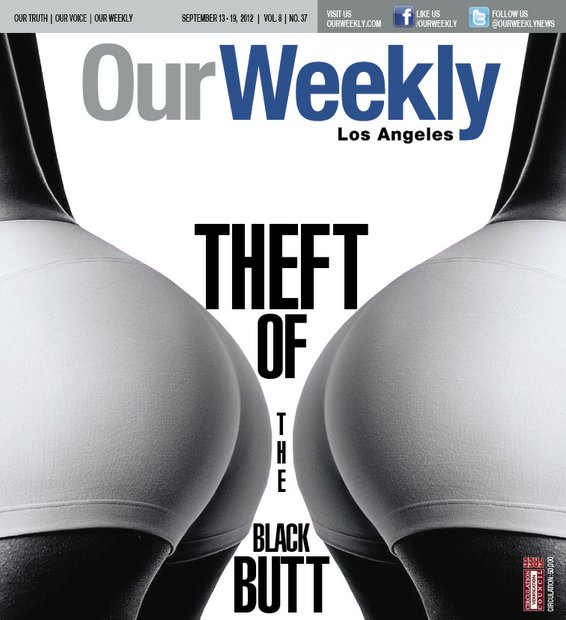 The publisher frowned at the ideas the mostly male production team had, so we created this. It still became one of the most popular issues in our 10-year histroy. 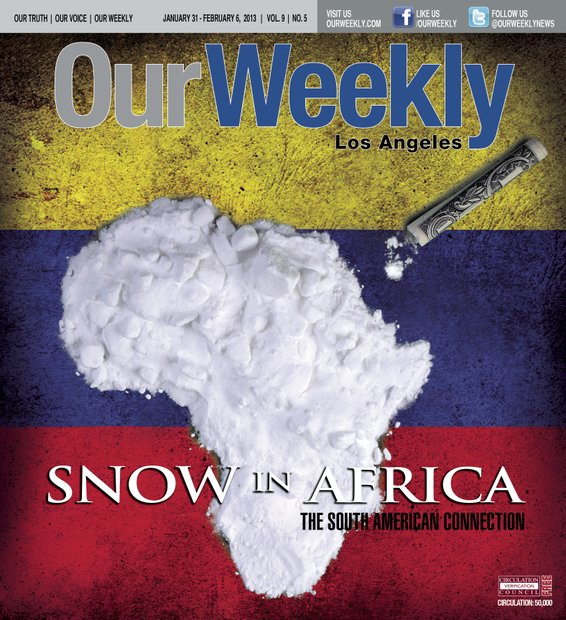 The African continent became a logistical staging area for South American cocaine prior to its destination “Western Europe.” This cover was designed during a live simulcast on Facebook. A cardboard cutout of Africa and a box of baking soda were used to create the image, Facebook friends were asked about the concept and a person of African heritage living in Spain guessed it. 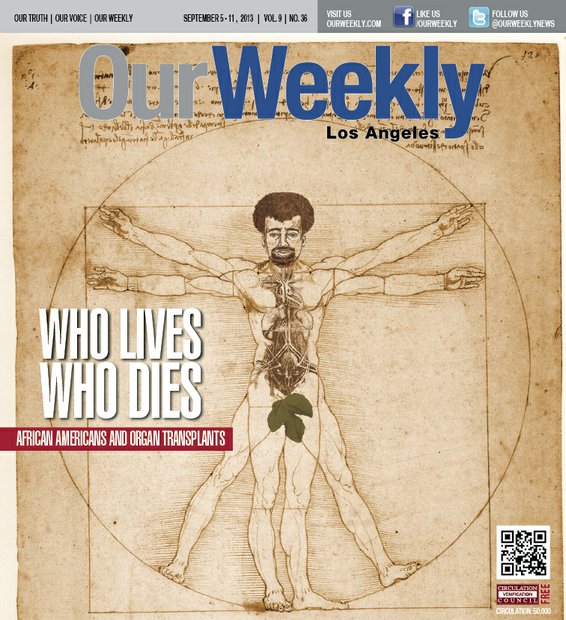 This cover concept taken from Leonardo da Vinci’s “Vitruvian Male.” His drawing was chosen for this cover because da Vinci broke the law when he performed the anatomical dissection used for the original drawing. Current organ policies in the United States tend to be preferential toward Whites, which also should be illegal. 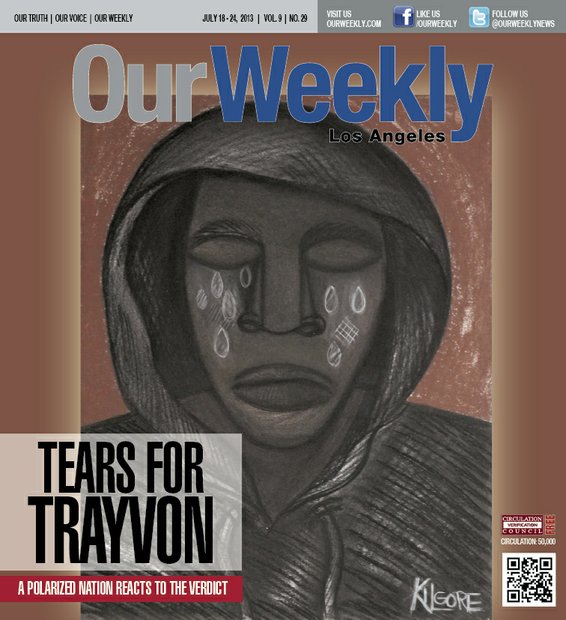 Trayvon Benjamin Martin, the 17-year-old African American boy from Miami Gardens, Florida who was fatally shot by neighborhood watch volunteer George Zimmerman, and the trial which followed, sparked outrage and fueled race tension nationwide. This artwork by Michael Kilgore represented the emotional state of much of the Black community, and those sympathetic to our struggle. 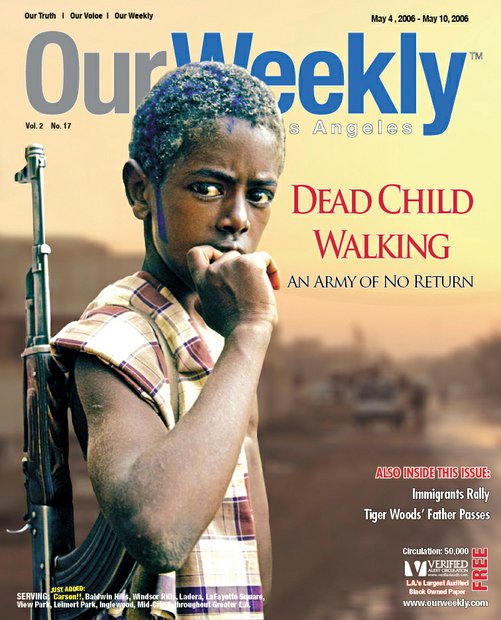 The kid was battle hardened. His body was lean, and he had the classic “two-thousand-yard stare” a phrase coined to describe the limp, blank, unfocused gaze of a battle-weary soldier. The look was likened to the gaze of inner-city gang members. 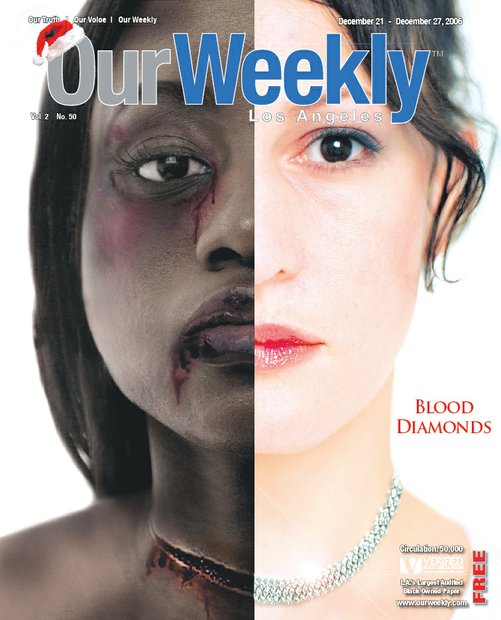 During the Christmas season when millions of dollars are spent on gift giving within the diamond industry, Our Weekly decided to merge the two worlds of the “Black diamond excavator” and the “rich consumer.”