“Velvet Jesus” addresses the subjects we'd rather not speak of 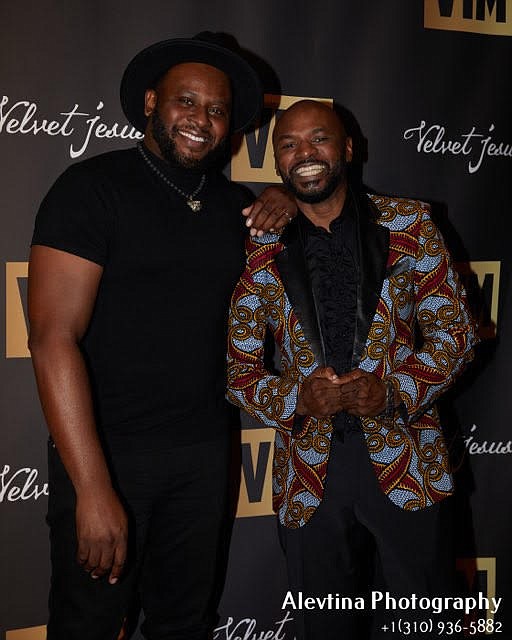 Denial is a coping mechanism common to all humanity. In some instances, it can be helpful in initially negotiating those difficult situations that confront all of us. Denial becomes problematic when it becomes prolonged, and the subject refuses to face up to it under the mistaken belief that it will go away or get better on its own.

Abuse and molestation are particularly touchy subjects that remain taboo, especially in the Black community, as Spencer Michael Collins IV, director of the recently completed “Velvet Jesus,” explains. Initially delving into illustration at the Savannah College of Art and Design, his odyssey led him to play writing in the church, and finally this, his motion picture debut.

Sharing the helm with him is film veteran, Columbia College (Chicago) alum and co-director Anthony Bawn. Originally from Florida, Bawn brought his cinematic prowess on board for this project as the pair divided the duties of crafting the narrative. It is a movie that explores the intersecting paths of two men whose shared history collides with unexpected results. Weaving this tale is LA native and writer Charles McWells, whose own trajectory led him from fabled Claremont McKenna College, and to the pinnacle of high finance on the east coast before drug abuse forced him to face up to unresolved issues from his childhood.

This semi-autobiographical narrative is his first outing as well.

Heading the cast is industry veteran Ernest Harden, Jr. A Detroit native and Michigan State grad, he slept in cars and on the park benches of New York City before being flown west to audition for the 1979 epic “Apocalypse Now,” along with another upstart named Laurence Fishburne, III. Needless to say, he didn't get the gig, but persevered to carve out a 60 plus credit career, with appearances on “The Jeffersons,” “Hill Street Blues,” “White Men Can't Jump,” “The Steve Harvey Show” and so on.

Harden's own personal experiences are dissimilar to that of his protagonist, “Vernon Chambers,” but he jumped at the chance to apply his theatrical chops to this challenging role. Second lead Jensen Atwood proves a more than equal foil, as the duo embark upon this journey of mutual discovery.

“I thought it was a story that needed to be told,” Harden says.

Running at one hour and 45 minutes, the film had its premiere at Exposition Park's California African American Museum on Friday, Sept. 10, with an intimate gathering of perhaps 200, assembled by public relations maven Marie Y. Lemelle.

Among the luminaries in attendance were Actor Roger Moseley of “Magnum P.I.” fame, gubernatorial candidate and Actor/Writer/Producer Patrick Kilpatrick and his wife, Heidi Bright, and Hollywood icon Marla Gibbs along with her daughter, actress Angela Gibbs, and a host of others.

Its provocative title, “Velvet Jesus,” plays a central role in the development of the plot, but Collins insists that you watch the movie to connect the dots.

Plans are in the works for “Velvet Jesus” to make the rounds of film festivals in the future.