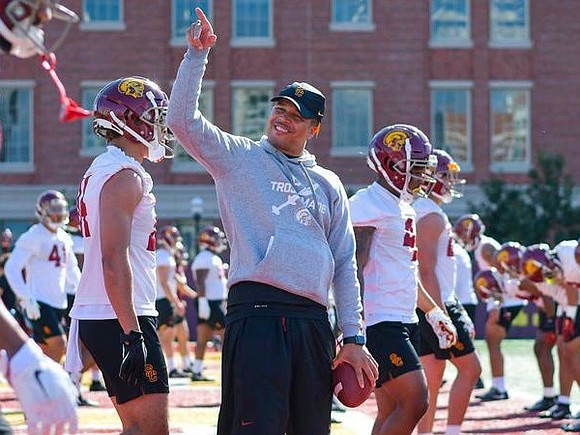 With the departure this week of Clay Helton as USC's head football coach, associate head coach Donte Williams will serve the interim head football coach for the remainder of the 2021 season. Williams becomes the first African-American head coach to take on this role in USC football history. Williams is one of the most well-respected coaches in the nation, and USC's players have made it publicly known that they value his presence. SI All-American recruiting expert John Garcia Jr. revealed to All Trojans why promoting Williams as interim head coach was the right choice.

“Donte Williams is one of the elite recruiters from a national standpoint and from a positional standpoint, with defensive backs, so expect USC to be able to maintain more verbal commitments than otherwise as long as he is at the helm," said Garica Jr.

"He is young and up-and-coming from a schematic standpoint and could be a legitimate candidate to keep the job, unlike how it went with Ed Orgeron. Of course ‘bigger’ names will be thrown out there in the coming days and weeks, but never discount those on the inside."

Williams, ability to connect with young athletes has been apparent for awhile, as he was named a Top 10 national recruiter by Sports Illustrated in 2015. Prior to USC, Williams coached defensive backs at Oregon, Nebraska and Arizona in recent years.

Williams' first game as head coach will be on Saturday in Pullman against the Washington State Cougars.