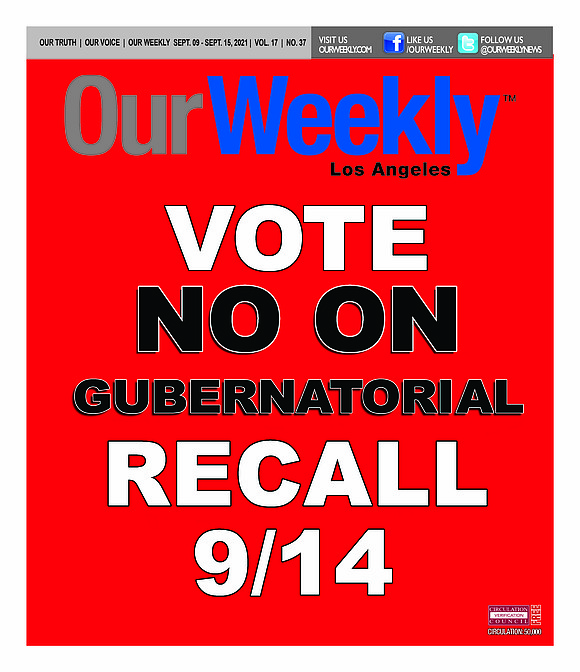 The federal Voting Rights Act of 1965 is under fire, as many African-Americans are being cheated out of their right to vote in Republican-led states. Voting is a basic, American right for which many Black ancestors fought and died.

Supporters of Gov. Gavin Newsom say it is especially important to raise everyone’s voting voices regarding the Tuesday, Sept. 14 election, as conservative Republicans who seek the governor’s recall want to take California in a different direction. Don’t sit out this special election and let others determine California’s future.

Even though Newsom has been a pioneer on same-sex marriage, gun safety, marijuana, the death penalty, universal health care, access to preschool, technology, criminal justice reform, and the minimum wage, and his policies were ultimately, embraced and replicated across the nation, he faces opposition members who want to turn California into a red state.

According to California Black Media, the state currently has the largest economy in the country and a budget surplus of $75.7 billion under Newsom’s leadership.

The governor issued the first statewide stay-at-home order in the nation, and his policies kept most public school students at home last year. Newsom has required all health care workers to get fully vaccinated by the end of the month.

“We still have work to do but this is a momentous occasion to be able to announce at a statewide level—a state of 40 million people, a state that has a population of 21 state populations combined—that we have broken now 80 percent of all eligible Californians having received at least one dose,” Newsom said during an appearance in Oakland. “That’s top 10 in the United States.

“... We continue to be mindful of our responsibility to do more and do better, particularly for diverse communities,” he said, noting that the Latino and Black communities still have generally lower vaccination rates across the state.

Newsom noted that the state is working “ to deal with the misinformation and the intentional disinformation” circulating about the vaccines, particularly on social media.

According to the governor, the state’s average rate of people testing positive for the virus has fallen to 4.6 percent, down from 7.1 percent a few weeks ago. He said by comparison, the positivity rate in Florida is 18.7 percent, and in Texas it’s 16 percent.

The governor has said his policies are driven by science, but they have helped land him in an unexpectedly competitive recall election.

California has not elected a Republican governor since Arnold Schwarzenegger won in a 2003 recall election.

White House press secretary Jen Psaki said Tuesday that President Joe Biden will visit California on behalf of Newsom early next week. His trip comes after other top Democrats, including Sen. Elizabeth Warren of Massachusetts and Sen. Amy Klobuchar of Minnesota campaigned for Newsom over the weekend and as Vice President Kamala Harris campaigned in the Bay Area for Newsom on Wednesday.

“While extremists push for a sham recall election in California, extremists like Marjorie Taylor Greene and Josh Hawley are spreading misinformation about COVID-19, the 2020 election, and President Joe Biden,” said Rep. Karen Bass (D-37). “It’s clear that we are still living in Trump’s America.”

Members of the California Legislative Black Caucus have voiced their support for the governor and shared why they intend to vote ‘no’ on the recall in a recent zoom meeting.

“We come together today as African- American leaders because we understand the danger before us. We understand this is a right wing move and we’re not going to let it happen,” said Bass. “We can’t get confused by Larry Elder. I don’t care what he looks like. We know Larry Elder very well in Los Angeles. He has built his career on attacking Black leaders.”

Congresswoman Lee echoed Congresswoman Bass’ support for Newsom. “We know that the health of our children, our neighbors and our communities depend on Governor Newsom’s leadership. He’s been there for us, and we will be there for him,” she said.

California Superintendent of Public Instruction Tony Thurmond shed light on unprecedented education spending Newsom helped make a reality in the state. “Our governor has given our schools a $123-billion budget for education. A record budget. It includes funding for broadband, mental health, community schools, universal meals for all kids, universal preschool for all 4-year-olds, COVID tests, PPE and anti-hate. We don’t recall governors who do good things for African-Americans and for all people. We say ‘no’ to the recall.”

Malia Cohen, member of the California State Board of Equalization, called Black women to action, stressing that the recall election is especially urgent for women’s rights. “If we lose Governor Newsom, we are losing our reproductive rights, we are losing our opportunity to have a champion that has been helping us fight the fight for child support and helping us lead the way for universal Pre-K. This is a human being that is an ally.”

San Francisco mayor London Breed thanked Newsom for believing in her and first appointing her as well as providing logistical support to her city. “Governor Newsom has been there for us. He has answered our calls. He has been active and reached out to us on so many different levels. And what I don’t want to do is to go backwards and stop the progress we have been making,” Breed said. “More importantly, I want to express that Gavin Newsom has been an amazing supporter and friend to African-Americans – not just in his capacity as governor but when he served here as mayor of San Francisco.”

Newsom, who joined the meeting, expressed his gratitude for the support he’s received thus far and reiterated the stances he plans to champion as governor. He pledged to continue to put women in positions of power, to build on economic and workforce development strategies for minority communities, and to continue to reform the public education system in California.

Newsom’s most candid moment came during a brief question-and-answer session near the end of the meeting. He was responding to a question posed to him by California Democratic Party Black Caucus chair Taisha Brown about his agenda for Black Californians once the election is over. “This is a point of passion for me. This is a point of pride that I didn’t just come to the issues of the African-American community in the last six months since this recall became real,” he said. “This has been the cause a good part of my life, working with Rev. Brown and so many other leaders on this call. I look forward to continuing this work hopefully for many years to come when we defeat this recall.”

In fact, the text of the recall proposition that is on the ballot begins by saying:

“Laws he endorsed favor foreigners, in our country illegally, over that of our own citizens. People in this state suffer the highest taxes in the nation, the highest homelessness rates, and the lowest quality of life, as a result. He has imposed sanctuary state status and fails to enforce immigration laws.”

Salas, who has been in activism and politics for decades, believes that the impeachment process is a Republican strategy to engage voters who mobilized for Trump last November.

Rev. Jewett L. Walker, Jr., political strategist and co-founder of Black Men Voting predicted, “We can expect cuts to education, a reduction in social welfare spending and a halt to police and criminal justice reform if Black men don’t vote in record numbers.”

Walker added, “There is a lot at stake for Black voters in this recall election. Many of the gains that we have fought for over the years may go right out the window with a regressive Republican governor. With so little time left to vote before September 14, it's important that Black men participate fully in this recall election.”

In Tuesday’s special election, voters are only faced with two questions. Voters can vote on either one or both parts of the recall ballot, but supporters insist that it is essential to vote “No” on question number one: “Should Governor Newsom be removed?” If you do not wish to recall the Governor, you do not have to answer the second question.

Registered voters who have not received a ballot, have misplaced it, made a mistake, or need language assistance, can go to any in-person voting location to cast their vote and/or receive help. Find a location at LAvote.net.

Voters can return ballots at a dropbox, by mail (postmarked by Sept. 14), or at an in-person voting location (before polls close on Tuesday at 8 p.m.).

• Drop it in the mail with pre-paid postage.

• Make sure to use a tamper-free mailbox that does not appear damaged.

• Make sure the signature on the ballot matches the one on the voter registration. If it doesn’t match, county election officials will contact the voter to resolve the issue.

To keep track of the ballot from the time it is mailed, received, and counted, signup at https://voterstatus.sos.ca.gov/ to receive automatic email, SMS (text), or voice call notifications about the ballot. This will keep voters informed throughout the entire process.

Report any illegal or fraudulent election activities witnessed at the polls. If voters believe you have been denied any rights or witnessed any election fraud or misconduct, call the Secretary of State Office’s confidential hotline at (800) 345-8683.