The politics of completing “A Crenshaw Miracle” 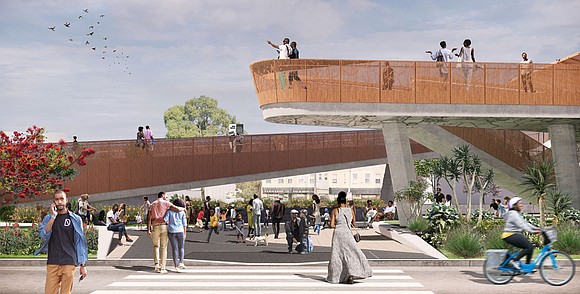 Yes, there has been and will continue to be much anger, consternation, frustration, and anguished hope spewed in the remaining community and artistic meetings concerning the still uncompleted Destination Crenshaw project in Los Angeles.

The main Crenshaw Boulevard Community Mural on a large two-block wall at 50th and Crenshaw, defaced with swastikas in 2018, and which has been around for over two decades, has not even been re-painted and primed, although Enkone, one of the original artists, did remove the swastikas. And the darned new train line, scheduled to cover over eight miles down Crenshaw to connect with the rail line going to the L.A. airport, remains an eyesore, a daily public traffic hassle, and seemingly an interminable project that the powers that be cannot seem to finish. With 2020 already gone, the new completion projections are now for some time in 2021, and that year is galloping through fast.

Yet, though some hope is fading and gentrification fears remain real, the Destination Crenshaw Project, which is to highlight Black art and artists, and Black cultural contributions to Los Angeles, over a 1.3 mile stretch of the street, remains a dream-in-the-works. Part of the intention is for African-American artistry to shine and sparkle to rail passengers as they scoot through the corridor toward the airport.

Part of the intention is for this L.A. Metro Rail Line extension to captivate and memorialize the sound, color, and energy of displays of Black artistic life as a demonstration that Black folks have long lived here made significant contributions to Los Angeles, and continue to do so.

Destination Crenshaw’s display, from Leimert Park Boulevard to Slauson Avenue, will be the nation’s largest art and cultural celebration of African-American contributions to world culture outside of Washington, D.C.’s Museum of African American History. There are to be permanent and rotating art installations, 10 new public parks, exhibits, and new L.A. streetscapes. It is to be a “real place” on the map.

But that’s all in the future. It can just be another tease. That would be a portent of political death for 8th District Councilman Marqueece Harris-Dawson, whose office is coordinating this big project in league with Crenshaw-area planners and doers.

As planned, the southernmost portion or node of the project will be at Slauson and Crenshaw and called Welcome Park—“Improvisation.” There, there is to be a 120-foot-tall Egyptian-styled obelisk (like the Washington Monument, only much smaller) that is to spell out Crenshaw in giant letters. Near 54th and Crenshaw, there is to be a second node called "Firsts", which is to feature new pocket parks. Around 50th Street, not far from Crenshaw High School, will be the third node called "Dreams", in honor of world-renowned Black L.A. architect, Paul Williams. The fourth node is to feature the restored 800-foot "The Crenshaw Wall" mural and the last part, the northernmost end, is supposed to be at a new Sankofa Public Park, right next to the new Metro Leimert Park Station that there was such a huge community fight over. From this vantage point (atop an elevated viewing platform), visitors will be able to really SEE the whole Crenshaw area, including the park itself, which by then should be open to the public and not chained as it is now.

But plans, though maybe not cheap, are just that—plans. Here’s hoping for some substantial meat on these offered bones.