The vision of OlaRonke Akinmowo 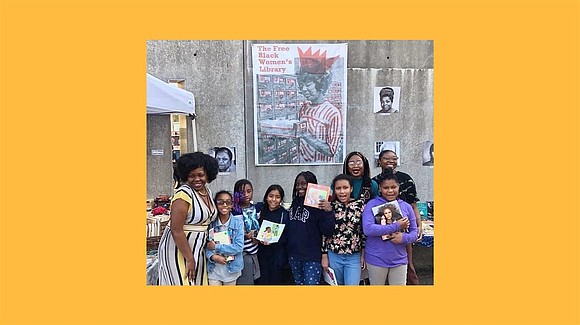 In its early days in 2015, the Free Black Women’s Library could be found on the steps of a Brooklyn brownstone, reports NBC News. OlaRonke Akinmowo would lug at least 100 books by Black women authors to a stoop and invite community members to trade a book by a Black woman author.

It was a simple community-building, social art project then, but Akinmowo dreamed that one day this library would have a permanent home — both in a building and on wheels. Nearly six years later, that dream will finally become a reality. A GoFundMe campaign for the project raised more than $100,000 in just two months.

“I was humbled and blown away and surprised," she said. "I was feeling really affirmed, like, ‘People really believe in this project and think it’s a good idea!’ I want to make people proud. The fact that I was able to raise it in such a short amount of time is something I’m super grateful for.”

With the new funding, Akinmowo said she is now looking for the perfect space in Brooklyn to house the library and a van or truck to serve as a “bookmobile” to transport it far and wide. She said she hopes to secure both by the end of the summer.

Akinmowo said this dream was born out of her commitment to social justice. When she found herself worn out from organizing against police brutality, she figured starting the biblio-installation would be a great way to serve her community. The 100 books quickly became 1,000 — including comic books, zines, journals and more — and she began hosting the library in pop-ups across the city. The library has served as a place where people of all genders, ages, races and abilities could trade books, talk about what they’re reading, and even attend author talks, performances and workshops.

The library features works from literary legends such as Toni Morrison and Zora Neale Hurston, as well as recent publications, such as Tressie McMillan Cottom’s “THICK.” Cotton spoke at the library’s July 2019 installation at the Museum of Contemporary African Diasporan Arts in Brooklyn. Even as the Covid-19 pandemic has halted many of the library’s in-person events, Akinmowo has facilitated a series of virtual activities, including feminist dance parties and book club meetings.