Black immigrants and asylum in America 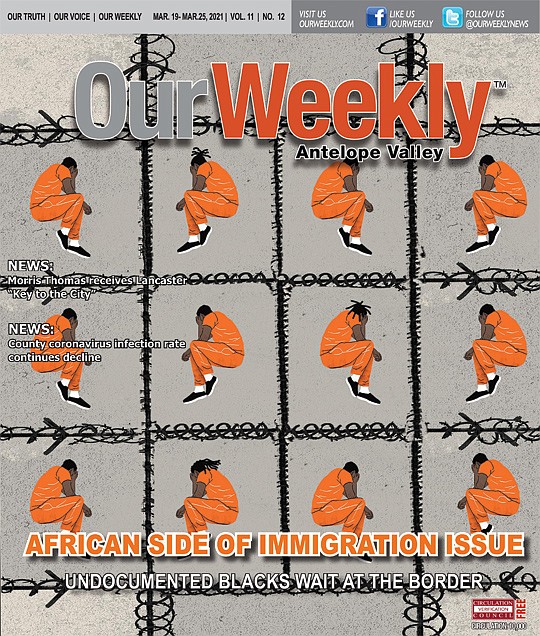 Ravi Ragbir is an immigrant from the Carribean nation of Trinidad and Tobago who was deported from the United States during the Trump administration.

“No one should be deported,” said Ragbir, who is currently fighting his personal deportation case while serving as an immigration advocate and co-founder of the New Sanctuary Coalition. “I compare it to the fugitive slave act.”

Ragbir said he had a legal conviction, but believes he was deported primarily because he was advocating for immigration rights. He believes that the Trump administration ran a “campaign of terror” that discriminated against Black and Brown people.

Ragbir said he was surveilled, followed and targeted, along with about 1,000 other immigrants rights advocates across the country.

A pathway to citizenship

“We’ve been through four years of cruelty and chaos brought to you by the Trump administration,” said Frank Sharry, founder and executive director of America’s Voice, which is working to build a fair and equitable immigration system.

Sharry said Trump’s polarizing views may have excited his base, but the majority of America supports immigration reform after seeing children ripped away from their parents and people held in cages like stray animals.

“I think the pro-immigration movement has shifted the debate,” Sharry said after explaining that he doesn’t think President Biden is much of a different style of politician from President Barack Obama.

“Unless you are Native Americans or you are African-Americans whose ancestors were brought here as slaves, you’re an immigrant,” said John C. Yang, president and executive director of Asian Americans Advancing Justice. Yang is encouraged by and supports immigration reform that will benefit people from all across the world.

“It plans to eliminate visa backlogs,” Mehta said. “This bill also attempts to (fix) the age out situation.”

Essential and low-wage workers are needed in the American economy, like farm workers and service providers Mehta said.

UndocuBlack’s rallying cry is “Immigration is a Black Issue.”

The browning of America

“What does an immigrant look like,” questioned Patrice Lawrence, the co-director of UndocuBlack, a national network advocating for Black immigrants seeking asylum in the U.S.

Lawrence said it is important to note that there is an image of what an immigrant looks like and it is not a Black person. She believes “inherent bias” is at play when it comes to not giving Black immigrants the same considerations as other ethnic minorities.

Nearly 10,000 Liberians are eligible for green cards, but additional guidelines limited how many people could actually apply and be accepted, Lawrence said. (3,600 Liberians have already had their immigration status extended by President Biden to June 2022.) Lawrence said there are about 55,000 to 80,000 diversity visas

available on a yearly basis. Notably, more than 60 percent of the people who receive diversity visas are from African countries.

However, that pales in comparison to the 11 million applicants every year. Currently, temporary protected status is valid until Oct. 4. For immigration advocates, the Muslim and African immigration ban being rescinded is an important first step.

However, having an aggravated felony for something that is criminally wrong but physically harmless like check fraud can put your immigration status at risk. This is important to note because “Black folks, as you know, are heavily policed,” Lawrence said.

Lawrence explained Biden’s plan will impact Black immigrants and their Temporary Protected Status. Those are just some of the reasons why the UndocuBlack Network is considered a thought and action leader in the fight for asylum for Black immigrants. It includes training and resources like “Know Your Rights” to develop leaders in the Black community.

The network consists of current and formerly undocumented Black people, creating a community and access to resources for advocacy, local organizing and cultivating the necessary strategic alliances needed to advance policies that will protect Black immigrants.

“Everyone should have access to healthcare regardless of immigration status,” said Marielena Hincapié, the executive director of the National Immigration Law Center.

“Family separation (was) a theme” over the past four years, Hincapié said. One solution for questions during this time of uncertainty is the Office of Immigrant Affairs, a one stop home for wrap-around services in LA County. They can be reached online (https://oia.lacounty.gov/) and by phone, toll-free at (800) 593-8222.

Meanwhile, as the Biden administration begins to overturn Trump administration mandates, county officials want immigrants to be aware of the rise in scammers looking to prey on misinformation.

“Immigration scams can cost immigrants thousands of dollars,” said Adriana Garcia, associate director of the LA City Office of Immigrant Affairs. “Make sure you’re not giving out original documents… or signing any blank or uncompleted forms.”

“Avoid legal services providers… that guarantee that you’re going to get your status,” Garcia said.

“A lot of this bad messaging is being circulated on social media,” Garcia added. “If you’re seeing this, be aware.”

The LA County Library system is also committed to being an online resource for obtaining US citizenship and temporary protected immigration status at https://lacountylibrary.org/citizenship/. They have services like citizenship in a bag, which is a toolkit inside a tote bag, featuring educational materials and handouts and applications to prepare immigrants for the naturalization process.

The LA County Library has partnered with the LA County Office of Immigrant Affairs to create Path2Citizenship, http://path2citizenship.lacounty.gov/ which guides immigrants through the process of obtaining US citizenship, complete with links to additional resources.

“When you have questions come to the library,” one librarian shared.

“During the pandemic, we actually saw less people seeking immigration services,” revealed Daniel Sharp, Chief of the LA County Office of Immigrant Affairs, adding that people were focused on issues like health and employment.

However, Sharp believes this will change as the pandemic draws to an end. Again, that’s why he and other officials are focused on fighting immigration scammers committing fraud and people practicing immigration law without formal legal backgrounds.

As hopeful as Biden’s immigration plan is for immigration advocates, some things, like family visas, are limited by Congress.

“We want to remind ourselves that we need to be informed,” said Rigo Reyes, executive director of LA County Office of Immigrant Affairs.