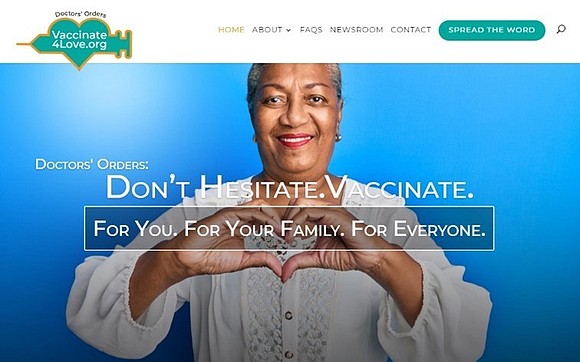 The latest research shows that even though hesitancy is declining in all populations, Black and Hispanic adults continue to be more likely than White adults to say they will ‘wait and see’ before getting vaccinated.

Dr. Jacqueline Jones, an ear, nose, and throat surgeon in Manhattan and Brooklyn and co-founder of Vaccinate4Love, says: “There is no way medical professionals can predict the degree of severity of COVID-19 on each individual. Some people in their twenties can contract the virus and their symptoms are no more severe than the common cold. For others in the same age group with the similar profiles, the disease can be fatal. There’s only one way to make this terrible disease go away,” Jones continued. “As a community, as a nation, as a world, for our loved ones, we all need to vaccinate.”

The story of the campaign began in January when Jones was between surgeries. As she discussed the vaccine with the nurses and doctors who were working with her, she was shocked that several expressed nervousness about taking the vaccine.

“If highly trained medical professionals were hesitant, what about everyone else?” she wondered. “These people had been through the worst of it. Last April and May, they were deployed to the hardest hit places such as Elmhurst, Queens, and the Bronx. They had seen the devastation up close, yet still had reservations.”

On the medical advisory board of Castle Connolly Top Doctors, Jones used her position to ignite her mission. “Each year, Castle Connolly compiles a list of the nation’s Top Doctors – the top 7 percent of doctors in the United States. We sent out an email to them and asked them to endorse a statement encouraging everyone, all Americans, to take the vaccine and 1,200 of the Top Doctors in America signed on.”

Wanting to take these top doctors’ advice to a broad swath of Americans, Jones reached out to her long-time patient and friend, Davia Temin, who runs a strategic marketing and crisis consultancy and coaches leaders and boards globally, to help create a viral public awareness campaign. Temin brought in Creative Director Victor DeCastro and Brand Strategist/Writer Roger Chiocchi, as well as her entire Temin and Company team – all on a pro bono basis – and the #Vaccinate4Love: Doctors’ Orders campaign “Don’t Hesitate. Vaccinate.” was born.

“We’ve experienced a terrible physical and emotional toll over the last year, and trust has been weakened in so many ways,” Temin said.

“Now we have an emerging way out. Science has given us this gift, but love will help us accept it. After all, it is love for our families, our communities, ourselves, and the world that gives us motivation. That’s what we hope our campaign can highlight.”