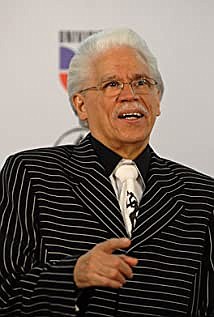 Rest in peace, my dear friend and teacher. You were one of a kind…” —Fania Trombonist Willie Colón.

Johnny Pacheco—the Dominican divo of salsa music—died on February 15 at the age of 85. He is lauded as one of the fathers of salsa music from the feverishly free and polyester-laden Fania All-Star days of the 1970s and is also credited with naming the genre.

Juan Azarías Pacheco Knipping was born in Santiago de los Caballeros in the Dominican Republic and raised from age 11 in New York City. He attended Juilliard prior to launching his career as a flutist, composer, arranger, band leader, and producer, in time penning more than 150 songs including, “Mi Gente” by Héctor Lavoe and “Quítate Tú (Pa’ Ponerme Yo)” by the Fania All-Stars.

Fania is often compared to Motown because both labels represented an unimaginable roster of talented artists. Pacheco once noted, “Everybody back then had their own record labels,” and explained, “The Black community had Motown, but Latinos had nothing.”

Johnny Pacheco is credited with naming the world-famous amalgamation of Afro-Caribbean rhythms as “salsa” in the 1960s: “I don’t know if I was the first to call it salsa,” Pacheco acknowledged in an interview, “but the reason I called it salsa is because… we had Puerto Ricans, Dominicans, Cubans, two Jews and one Englishman.”

It started to brew in the 1950s and exploded in the 1970s in clubs like the Palladium, the Red Garter and the Cheetah, not to mention corner bars on the streets of Spanish Harlem.

Bassist Bobby Valentín recalled Pacheco’s importance: “He had the vision to bring us all together—all the artists who recorded with the Fania label—and to form this all-star band where each of us brought something unique to create its special sound, a new sound.”

“Pacheco was the center of everything to do with salsa music in New York,” vocalist Rubén Blades asserted.

“Live in Africa” follows the Fania family to Zaire (now the Democratic Republic of the Congo) taking Afro-Caribbean music to Africa. The Fania All-Stars played the 1974 concert as part of a three-day festival prior to the George Foreman/Muhammad Ali Rumble in the Jungle fight. Other featured entertainers included James Brown, Bill Withers, B.B. King, The Spinners, and beloved African performer Miriam Makeba.

In honoring what the Fania All-Stars owed the Motherland in terms of musicality, the “backup singers” all huge salsa stars, playfully engaged in a call and response bit with 80,000 audience members: