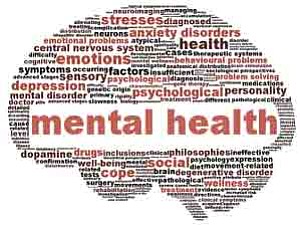 It is still unclear as to all of the various side effects of the novel coronavirus (COVID-19). Since it is still being researched, and everyone’s body is different, it’s hard to determine who will have complications afterward.

However, according to an article by The New York Times (NYT) some COVID-19 patients develop psychotic episodes which force them to recover in a psychiatric hospital.

A scene from a drug-induced psychedelic thriller is how one 42-year-old woman described her reality. She was infected with the virus earlier last year but didn’t experience any severe physical symptoms. Months later, however, she experienced the sound of voices inside of her head telling her to kill herself and her children. The mother of four has never experienced any mental health issues before, nor does her family have a history of mental illness. When she arrived at the psychiatric hospital South Oaks in Amityville, N.Y., psychiatrist Dr. Hisam Goueli told the NYT that it could possibly be COVID-19 related.

“It’s a horrifying thing that here’s this well-accomplished woman and she’s like ‘I love my kids, and I don’t know why I feel this way—that I want to decapitate them,’” Goueli said in the interview.

Shortly after, three more cases similar to this one were reported. The only factor all patients had in common, was COVID-19.

According to the National Center for Biotechnology Information (NCBI), a study conducted in the United Kingdom about neurological or psychiatric complications found out that 10 patients of 153 people infected with COVID-19 had “new-onset psychosis.”

A different study from Spain also reported 10 patients, at the same hospital, having similar symptoms. The same was discovered in the Midwest and Great Plains.

However many physicians suggest only a small population of COVID-19 patients will develop psychotic episodes. Regardless, it’s another area of the COVID-19 repercussion that needs to be researched further and to be considered: COVID-19 can attack an individual’s mental health, as well as interrupt the brain function.

Initially, only physical symptoms caused by COVID-19 were detected, mainly in the respiratory tract. However, there is now sufficient proof that COVID-19 can cause psychological, cognitive, as well as neurological symptoms.

Severe psychological symptoms can develop even in patients who had mild to no physical symptoms. Various reports suggest that individuals infected with COVID-19 often experience dizziness, confusion, delirium as well as other neurological- and cognitive complications. The research suggested that individuals with a preceding mental condition, such as anxiety or depression, are more vulnerable to COVID-19.

It is still unclear how COVID-19 affects the central nervous system, but scientists suggest that the new strain of the novel coronavirus attacks the brain by harming the brain’s blood supply, causing swelling around the tissue in the brain.

The cognitive symptoms are experienced as brain fog, as well as fatigue. A study published in December, 2020 in Nature Neuroscience, scientists found out that the “spike protein,” also known as “S1 protein” in SARS-CoV-2 - which causes COVID-19 - can enter the blood-brain barrier as demonstrated in the study of rodents. Which proposes the theory that SARS-CoV-2 can enter the brain in humans.

“The S1 protein likely causes the brain to release cytokines and inflammatory products,” corresponding author and professor of medicine at the University of Washington School of Medicine William A. Banks said.

The scientific term for the severe inflammation caused by the coronavirus is called “cytokine storm.” The response of the immune system to the binding proteins and the virus itself is overreactive as the body attempts to eliminate the so-called intruder.

In addition, a damaged respiratory tract can result in not delivering enough oxygen to the brain, LeMonda said.

“We know that when you have the COVID infection you have trouble breathing and that's because there's infection in your lung, but an additional explanation is that the virus enters the respiratory centers of the brain and causes problems there as well,” Banks said.

According to Dr. Goueli, his patient who had thoughts of killing her children had a difficult time.

“Every day, she was getting worse,” Dr. Goueli told The NYT. “We tried probably eight different medicines [...]. She was so ill that we were considering electroconvulsive therapy for her because nothing was working.”

Until one antipsychotic medication called “Risperidone” finally worked. Risperidone is used to treat schizophrenia as well as bipolar symptoms, and is “95 percent effective.”

“We don’t know what the natural course of this is,” Dr. Goueli said. “Does this eventually go away? Do people get better? How long does that normally take? And are you then more prone to have other psychiatric issues as a result? There are just so many unanswered questions.”

However, individuals can experience severe anxiety and depression without contracting the virus, as a result of fear of getting infected and trying to cope with the current situation caused by the pandemic, such as financial distress and the loss of income or a loved one. On the other hand, individuals who have been diagnosed often develop depression and anxiety due to being forced to isolate but also the fear of being abandoned by friends and relatives.

“People have been worried that COVID-19 survivors will be at greater risk of mental health problems, and our findings … show this to be likely,” Professor of Psychiatry Paul Harrison, at Britain’s Oxford University, told The New York Post.

A new report conducted by The Lancet Psychiatry Journal in the U.K. suggested that 18 percent of patients with COVID-19 will experience depression, anxiety, and psychotic episodes, within the first three months of contracting the virus. COVID-19 patients have a higher risk to develop a mental illness than individuals who have not been infected by the virus.

“Given the novelty and scope of the pandemic, there is little-to-no framework, particularly during the lifespan of the majority of the population alive, for how to manage the threat to health, lifestyle, and societal change,” psychologist and Clinical Assistant Professor Dr. Jessica Stern, with the Department of Psychiatry at NYU Langone Health, told Healthline.

Another survey by Trusted Source, an internet site, from Ecuador found out that individuals infected with COVID-19 often experience post-traumatic stress disorder, depression, anxiety, and insomnia.

“COVID-19 can result in psychological issues due to both pandemic stress and the physical effects of the disease,” Le Monda said.

The patients in the survey were mostly adults in their 30s - 50s but elderly individuals with COVID-19 were at two to three times higher at risk of developing dementia.

However, it is unlikely for patients in their 30s, 40s, and 50s to develop psychotic episodes with symptoms similar to schizophrenia, which is often detected in younger people or dementia which is mostly common for the elderly.

“It’s very rare for you to develop this type of psychosis in this age range,” Dr. Goueli said.

Another interesting aspect is that these cases - such as the woman who talked about killing her children - felt something is not right and decided to get checked out by a professional, where generally “People with psychosis don’t have an insight that they’ve lost touch with reality,” according to Goueli.

The British study conducted by the University of Oxford and NIHR Oxford Health Biomedical Research Centre focused on health records from over 62,000 COVID-19 patients in the U.S.

However it is unclear how long psychotic episodes can last. It depends on what medication is effective. According to data collected, a woman in the U.K. who experienced paranoia and was brought to the psychiatric hospital, spent 40 days there to recover.

“A better understanding of the recovery trajectory may lessen one’s anxiety and lead to improved mental health,” LeMonda said.