Are Dr. King’s teachings relevant in the new millennium? 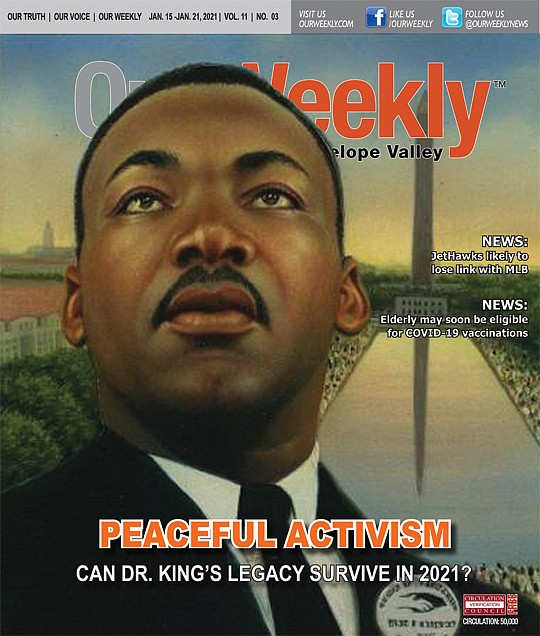 “Every now and then I go back and read Gibbons’ ‘Decline and Fall of the Roman Empire.’ And when I come and look at America, I say to myself, the parallels are frightening.” —from “The Drum Major Instinct,” a sermon delivered by Martin Luther King on February 4, 1968 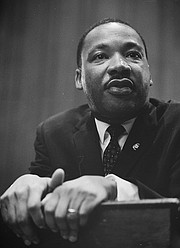 Here and now, more than 50 years after America’s proponent of peace was shot down, Martin Luther King’s bequest remains firmly in place while the war drums of intolerance rage around the world, especially in the country he was born and bred in.

Often replicated, but never verified, the above quotation is useful here because it builds on the concept of the “Big Lie” propagated by Adolf Hitler in his infamously influential manifesto “Mein Kampf“ (1925).

The hue and cry to verify the latest Presidential election results (and the gathering of American lawmakers to undertake their due diligence) prompted another group (bonded by mutual feelings of oppression) to “seize the day,” and storm the grounds of the U.S. Capitol on Jan. 6.

The Capitol building has an interesting, Afro-centric history behind it. Like much of our nation’s capital, it’s construction was largely the result of Black labor including a little known (enslaved) sculptor’s apprentice Phillip Reed, who completed the casting of the 19 foot bronze “Statue of Freedom” which sits atop the dome of the building.

During the Civil War, Washington, D.C. was nestled between the Confederate enclaves of Maryland and Virginia (and 95 miles from the Rebel capital of Richmond). But aside from an audacious (but futile) charge by Gen. Jubal Early in 1864, the southern upstarts never came near it. Last week’s breach of the Capitol building security is thus significant for another reason: it is the first time the confederate battle flag (alternately known as the stars and bars) has appeared in the nation’s legislative hub.

These events invited comparison to another march/protest by others on the opposite end of the political spectrum, Black Lives Matter (BLM). Enraged by the (lack of) response to the killing of George Floyd by police, scores of protests were held across the country, most tellingly, one on June 2, 2020 in Washington, D.C. (this time at the Lincoln Memorial).

In the words of BLM founder Melina Abdullah, a professor at Cal State Los Angeles, Trump then “sicced” the police (and over 4,000 members of the National Guard) on the nonviolent demonstrators. In the aftermath of last Wednesday’s installment, scores of news commentators, political pundits, and average Joes (including the President-elect) compared and contrasted the two scenarios to underscore the hypocrisy of the law enforcement and justice systems.

Abdullah states that while she remains an admirer of MLK, she champions the teachings of Malcolm X. To finalize her thoughts, she reminds us that Martin Luther King was, after all, an evolving theorist and practitioner.

Am I Black enough for ya?

Not all academics were as forthcoming. Another unnamed faculty member from yet another local institute of higher learning was “surfing” the web on Wednesday when he came across references to the debacle, prompting him to switch on the television. His first reaction (like many across the country) was that elements of Black Lives Matter (BLM) would not have been able to come within the shadows of this (in his words) “citadel of democracy.” This of course, is a reference to the incident over a year ago, in which BLM endured documented occurrences of police brutality, and is a sentiment voiced by myriad, dissimilar sources, (including, as noted, by the incoming Commander in Chief).

Fortified with a sense of righteous outrage over the double standard unfolding, he realized that even to the untrained eye, a complete breakdown of security was in progress Throughout the telecast he remained speechless as the cadre of trained professionals fell under the onslaught of frenzied Trump fanatics. He admits that his visceral reactions were informed by the indignities suffered over a lifetime as a person of color in these United States.

As he related these events, his conversation was peppered with snickers and bemusement, which he attributed to the coping mechanisms accrued as a method of survival (i.e., laughing to keep from crying).

He would, however, go no further. He had after all, a tenured faculty position to think of.

Other backgrounds, other perspectives

“We’re on the verge of what I fear to be a pretty significant breakdown in democracy and civil society here.” —former chief of U.S. cybersecurity Christopher Krebs, fired by Donald Trump in November, 2020

A chance encounter with a civil servant, possibly Jewish, who supplements his income by working as a retail clerk, provided a telling prediction of where these current events might lead. After the usual over the cash register banter about news, weather, and sports, the conversation turned to politics and finally, the debacle back east. He casually remarked that he wasn’t surprised that this massive assault by a pro-Trump mob on a bastion of democracy took place.

“Do you think all this will continue?” someone asked.

Indeed, the marauding hordes sported many of the accouterments so dear to the hearts of the alt-right: clothing adorned with slogans like “Camp Auschwitz,” an apparent reference to the World War II concentration camp in which 1.1 million people were exterminated; shirts proclaiming allegiance to the “Proud Boys,” QAnon,” the “Three Percenters;” and of course, the Confederate battle flag.

In the face of all this naked aggression, is it safe to ask whether the tenets of pure non-violence have any merit in this increasingly polarized society?

“Dr. King, while admirable, for me is not the greatest Black leader to ever live. I know that for a lot of White people he is, because of his nonviolent message,” she said. “I would say he was one of two acceptable to White people Blacks we were taught about in school—the other being Rosa Parks.”