Where I see bitcoin going from here 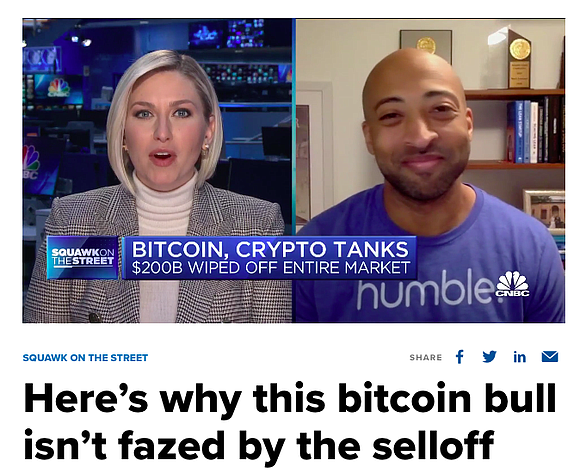 I joined “Squawk on the Street” to discuss the cryptocurrency’s move and why it’s become a popular investment. Below are some of the areas I covered in the interview including what I believe will drive further adoption of Bitcoin.

Why bitcoin has been going higher

Bitcoin has grown over 400 percent in the last 12 months with a market cap of approximately $600B. Additionally, Bitcoin ‘whales,’ addresses with more than 100 Bitcoin, accumulated an additional 47,500 Bitcoin in December alone, according to crypto exchange Kraken.

The reality is that the USD loses at least 2 percent in value each year with the current inflation rate. Institutions and corporate buyers are adopting Bitcoin as a potential global store of value and inflation hedge.

A great example of this is MicroStrategy announcing over $1B in total Bitcoin purchases in 2020.

Where I see bitcoin going from here

The asset won’t just be limited to early adopters with the highest conviction.

Wall Street and tech will be enticed by Bitcoin’s liquidity and price discovery.

Bitcoin’s monetary network will inform many industries, enterprises, and group segments in one way or another.

Growth won’t be linear but will rise in the long term.

According to Blockstream’s Samson Mow, the Bitcoin blockchain network now transfers $859,375 every second globally without banks.

Tokenization, which is issuing Bitcoin to represent real tradable assets digitally, will disrupt industries and turn the world into investors by giving all people access to the last decade's best performing asset class.

This new financial system will be more vast than we’ve ever seen, merging crypto with the web.

A few solid use cases

Companies will supply the constant presence of skin in the game to consumers by rewarding them with Bitcoin or crypto:

Lolli rewards Bitcoin to consumers who shop at their favorite online stores. My wife uses it and doesn’t fully understand Bitcoin. Lolli has turned the casual shopper, like my wife, into a passive investor.

Roll enables creators to start their own social money economies by incentivizing with rewards for value created.

These are just a few use cases displaying how Bitcoin’s power — as a global alternative currency and universal store of value — is shared with the world.