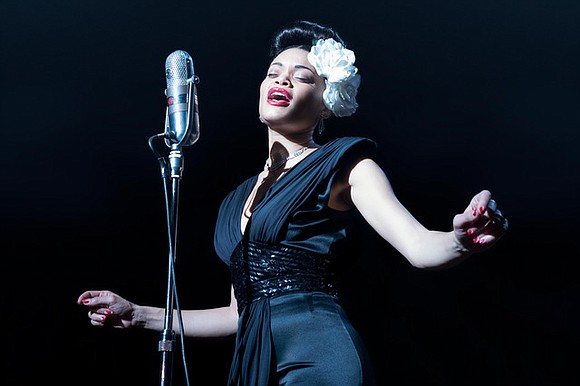 It’s a major showcase. Viewers can watch the brilliant musical talent Andra Day take center stage as she crosses over into the world of film acting. With the bright lights on her, she summons up an astonishing, all-in, Oscar-caliber portrayal of Billie Holiday. A feat achieved by Diana Ross five decades ago. Same role, similar story. But Day’s interpretation of “Lady Day” is decidedly more raw.

Director/producer Lee Daniels has been building up to this moment. Producing strong women’s stories (Precious), casting actors in career-changing, award-winning roles (Halle Berry, Monster’s Ball) and chronicling African American history (Lee Daniels’ The Butler). Now, he’s hired Pulitzer Prize-winning playwright Suzan-Lori Parks (Topdog/Underdog) to adapt “The Black Hand,” a chapter from Johann Hari’s 2015 bestseller, Chasing the Scream: The First and Last Days of the War on Drugs. That segment of the book focuses on the Feds chasing, harassing and arresting Billie Holiday. Seemingly for drug use, more likely for her singing the controversial anti-lynching protest song “Strange Fruit.” Parks’ touching screenplay, with its strong characters, poignant dialogue and easy to-discern storyline, makes a near perfect blueprint for this ambitious project.

In 1939, the U.S. Congress has failed to pass anti-lynching bills, though the tragic hanging of black men by white mobs is evident. Yet the government finds time to initiate a “war on drugs” policy. That effort is led by Harry Anslinger (Garrett Hedlund, Mudbound), the racist chief of the Federal Bureau of Narcotics (precursor to the DEA). Anslinger is specifically ranked by Billie Holiday’s (Day) song “Strange Fruit,” a million-selling Top 10 hit: “Those lyrics provoke people.”

He laser focuses on the singer and is determined to infiltrate the jazz world she inhabits, deeming it a bastion of drug consumption. Under Anslinger’s orders, Jimmy Fletcher (Trevante Rhodes, Moonlight), the country’s first black FBN agent, insinuates himself into Holiday’s entourage. He flirts, courts, sparks and bamboozles her into a relationship. One that leads to her arrest. She is devasted by his betrayal. He is on a mission: “My father told me that drugs would be the death of black people.”

Wounded and humiliated, Holiday continues to record albums, tour the country and have affairs with women and bad relationships with cads. Her assistants, Roslyn (Da’Vine Joy Randolph, Dolemite Is My Name) and Freddy (Miss Lawrence, Empire), her surrogate family, accompany her. PTSD from an abusive childhood, rape and other ordeals haunt her. She buries her pain in nicotine, heroin and alcohol, leading to addiction, drug busts and prison terms. The incessant misery surfaces in her vulnerable voice. A vocal quiver that mesmerizes legions of fans—black and white.

The film’s style is quite elaborate, which is a blessing and a curse. Costumes by designer Paolo Nieddu (Empire) create dazzling silhouettes. Andrew Dunn’s cinematography (Precious) makes the sunlight incandescent in outdoor scenes. Jay Rabinowitz’s editing (8 Mile) gives the 2hr 10 min footage a pace that is rarely questionable. While the only music more beautiful than Kris Bowers’ (Green Book) score is Day singing from Billie’s catalogue (“All of Me”) and new vintage-sounding material (“Tigress & Tweed”).

However, Daniel T. Dorrance’s production design (The Paperboy) and Elise de Blois and Pascale Deshenês’ set decoration go overboard. Especially in dressing room scenes that look more like a store window at Stickley Furniture than a back room at a club. These are the times when Dunn’s lighting produces a soft distracting glow. Add in some superfluous flashback scenes, Holiday’s hallucinations and artsy title cards flashing on the screen and the film’s heavy-handed style almost stifles any hope of realism. Holiday’s life is complicated enough. Overwrought imagery is unnecessary. Less fluff and more attention to authenticity would have taken this production to a higher level. To the high summit where Day’s flawless performance dwells.

Vivid, dramatic sequences, like Holiday handcuffed to a hospital bed by the Feds, feel genuine. Moments of spectacle, infighting or posing for photographers feel a bit shallow and TVish. The vacillating between gripping historical bio/drama and syrupy melodrama is something viewers will have to weather. That inconsistency in tone is a small price to pay for watching Daniels pull captivating performances from the entire cast. He gives them room to work their magic, and they don’t disappoint.

Supporting actors bring context to Holiday’s troubled life: Rob Morgan is super sleazy as her lover turned husband Louis McKay. Ditto Tone Bell as the abusive nightclub owner John Levy. Natasha Lyonne as Holiday’s girlfriend Tallulah Bankhead brings an edge to the role. Furly Mac (Empire) gleams in a pivotal scene that underlines the evils and irony of Jim Crow laws. He’s a hotel elevator operator who won’t let Holiday ride with him. “No Negroes allowed on this elevator, except me,” says the liftman.

Also impressive is Adriane Lenox (21 Bridges) as Mrs. Fletcher, who schools her duplicitous son on the legacy of Holiday, the woman he entraps: “She’s singing it for all of us. Ain’t no other Negro bold enough to do it!” Hedlund as her Fed nemesis, Lawrence and Randolph as her sidekicks and Rhodes as her love/hate boyfriend all perfectly surround the leading actress in distinct ways. Like planets revolving around the sun.

Day’s process for the role is very reminiscent of Halle Berry’s approach to her Oscar-winning performance in Monster’s Ball: Infuse yourself into the character with complete abandonment. If substance abuse, nudity and sex scenes are part of the deal, do it. And, Day’s style of acting is similar to that of Naomie Harris and Jessica Lange: Build the character from the inside out, emotionally and invisibly.

Lee Daniels gave a gifted singer a golden opportunity to shine as an actor, and Andra Day was up to the challenge. She leaves nothing to the imagination. Every ounce of her interpretation of Billie Holiday is left on the screen. It’s a performance that will touch adult audiences in the deepest ways.