Homeless in LA County at tipping point of survival 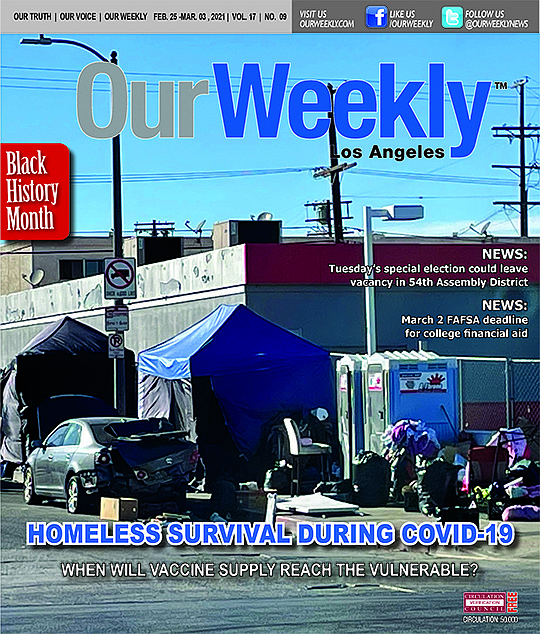 It’s not often that a federal judge steps from behind the bench and—though briefly—sets aside his/her judicial objectivity.

That’s what happened last month as U.S. District Judge David Carter called out local officials in pointing to an “apparent abdication of responsibility” in addressing the worsening conditions along Skid Row in Downtown Los Angeles.

Carter is overseeing a federal civil lawsuit filed by the LA Alliance for Human Rights seeking to compel both the City and County of Los Angeles to get a grip on and inform the citizens of their immediate plans to get these persons off the streets and into any and all forms of temporary housing.

Carter labeled Skid Row as a “significant natural disaster in Southern California with no end in sight.” He recalled surveying the area not long ago after a recent storm and saw hundreds of poorly-clothed persons wet and shivering, coughing and wheezing. One woman was naked and looked as though she wouldn’t last the night.

Carter wants to know whether the policies with regard to Skid Row were “intended” to make the area a “gathering place—voluntary or involuntary—for racial minorities.” In essence, his request that city officials produce any materials where race has been discussed or considered poses the very difficult suggestion that the filth, squalor and desolation that marks Skid Row is a deliberate plan to deposit and omit from memory thousands of African-Americans who have lost their way.

For most of the approximate 67,000 homeless persons in Los Angeles County, their unsightly plight is a year-round predicament with no easy answers forthcoming.

The pandemic compounds their difficult life.

When the coronavirus emerged in the United States last year, public health officials and advocates for the homeless feared the virus would rip through shelters and tent encampments, ravaging vulnerable people who often have chronic health issues. In March 2020, some shelters saw large COVID-19 outbreaks, but the virus didn’t appear to bring about the devastation many had feared.

‘Outside is safer than indoors’?

Researchers nationwide feared this population would succumb in high numbers to the worst face of the disease. At the time, some shelters had outbreaks, but most of those infected showed no symptoms. At the beginning of the pandemic, health professionals knew that living outside normally “weathers” homeless people, teeing them up for a host of diseases and early death.

The Centers for Disease Control and Prevention CDC) suggested that “outside is safer than indoors” because fresh air disperses droplets containing the virus—and there’s more room to keep people apart. One year later, many scientists dispute that assumption as the so-called “resiliency” of homeless people is not as strong as earlier believed.

Locally, about 1,500 homeless persons have tested positive. The numbers have increased since January, and while health experts say the numbers have yet to indicate how widespread the disease is among the homeless, they fear that new more infectious strains of the virus could rampage through the ever-present encampments, tents and makeshift dwellings.

Homeless people cut off from society

Dr. Margaret Kushel, director of the Center for Vulnerable Populations at UC San Francisco, offered an unexpected assessment of how the pandemic has affected homeless people overall. She spoke to being “outside and unsheltered—just in terms of COVID—may allow people to be at lower risk.” She suggested that a reason why the virus didn’t attack the homeless early on was because the airborne spores may dissipate more easily outdoors than indoors but “...living outside has its own risks.” Kushel added that because data on homeless infections is poor at best and that this community is effectively cut off from society, “we’re learning more each day about why the homeless population is so susceptible” to infection.

Federal officials have said the rates at which homeless people have tested positive are “all over the place.” Barbara DiPietro, senior policy director for the National Health Care for the Homeless Council, said it is difficult to test and track homeless persons because they’re not often in the same place from day to day. Coupled with the unpredictability of the virus, the challenge develops into a “wildly variant, moving target depending on who and how and when you test,” DiPietro explained.

The virus has struck the homeless living on the streets and in shelters. Infections once at a minimum are increasing daily. A recent report published by the nonprofit National Alliance to End Homelessness projects that the homeless population nationwide “will be twice as likely to be hospitalized, two to four times as likely to require critical care, and two to three times as likely to die as the general population” as a result of the pandemic.

The Los Angeles Mission this month began a mitigation program in vaccinating 80 seniors and staff members at the facility. In concert with the Los Angeles Homeless Services Authority (LAHSA), the mission has since secured more than 40 shelter locations and has been working to create an additional 2,000 beds where officials can isolate persons experiencing symptoms. As well, LAHSA has installed more than 300 hygiene stations for people living outdoors, and has deployed two dozen mobile shower facilities across the county.

The CDC estimates that there are 1.4 million people living in homeless shelters each year. It is a population with the potential for widespread transmission as “many people experiencing homelessness are older or have underlying medical conditions, placing them at higher risk for severe COVID-19-associated illness.”

Other factors that make the homeless especially susceptible to the virus include food insecurity and lack of proper nutrition, insufficient rest, difficulty complying with social distancing guidelines, and limited access to running water needed for hand washing and proper hygiene. Testing of homeless people everywhere got off to a slow start, and an unknown number of persons may have died of stroke, heart attack, cancer or other causes without their conditions being recognized as complications of COVID-19. The majority of these deaths were among seniors. Not all jurisdictions track deaths of homeless people, and homelessness is not always noted on death certificates.

Myth of homeless ‘protection’ against virus

“We were supposed to be getting a sufficient amount of the vaccine for those above the age of 65, but that hasn’t come about as soon as I was hopeful for it,” said Rev. Andrew Bales, president of the Union Rescue Mission. In January, Bales and staff members erected a large tent behind its five-story building to make room for more people without a home. It quickly became a triage center as the county Department of Public Health (DPH) struggled to respond to the sudden surge in infections.

“The unexplainable ‘protection’ that people who are homeless have had from COVID-19 is disappearing,” Bales said. “All of Skid Row and many agencies and missions are hot spots. All are overwhelmed.”

The Union Rescue Mission has been working with Housing for Health (HFH), a DPH program that provides housing for medically vulnerable homeless people. They oversee the county’s coronavirus isolation and quarantine system. To keep up with the cases, the agency has opened four new isolation/quarantine sites to double the amount of available beds. Cheri Todoroff, director of HFH, recognized early on that the organization would have to move quickly to counter the winter surge in infections.

“It’s been an amazing effort to stand up this type of operation,” Todoroff said. She commended a number of nonprofits such as PATH (People Assisting The Homeless), Exodus, the People Concern, and JWCH Institute (John Wesley Community Hospital) for their assistance.

The surge in infections among the homeless has forced the HFH to restrict admissions for the first time. Toderoff said her organization experienced a shortage of beds, but now they number about 820 and the sites are predominantly occupied by homeless people. “It’s hard,” she said. “The entire shelter system is being hit hard right now.”

The increasing infections on Skid Row has prompted the HFH to try and move those homeless people who have tested positive into isolation.

That’s a tough challenge: Skid Row is home to more than 5,000 persons, about 3,000 of whom are forced to sleep on the sidewalk, itself a veritable Petri dish of death.

The DPH has listed heart disease as the third biggest killer among the homeless. That malady is one of the most serious of underlying conditions that can produce a worse outcome in those who are infected with COVID-19.

At present, outreach workers are handing out masks, food and water while screening people for virus symptoms and educating them about social distancing and other precautions. As an example, the Salvation Army shelter in Bell—one of the largest in the nation—for the past year has housed only half of its residents (originally 480 down to 220) in an effort to curb the spread of infections. Two-person sleeping cubicles were reduced to one, and residents sit two-to-a-table in the cafeteria.

Back on Skid Row, homeless people are more often taking their health into their own hands. One woman, Stephanie Williams, began making masks from her sewing station in a big white tent at 5th and San Pedro streets. The Los Angeles Community Action Network has pitched in with 20-gallon barrels to serve as makeshift sidewalk wash stations.

The emergency worsens by the day. Bales recalls a 79-year-old woman who appeared to have COVID-19 and paramedics were summoned. They said they couldn’t transport her because the hospitals were full.

“When you’re at this point where medics can’t take someone because the hospitals are full and ambulances are waiting for seven hours for a hospital bed,” he said, “you know that [the virus] is spreading wider and wider until it likely will affect us all.”