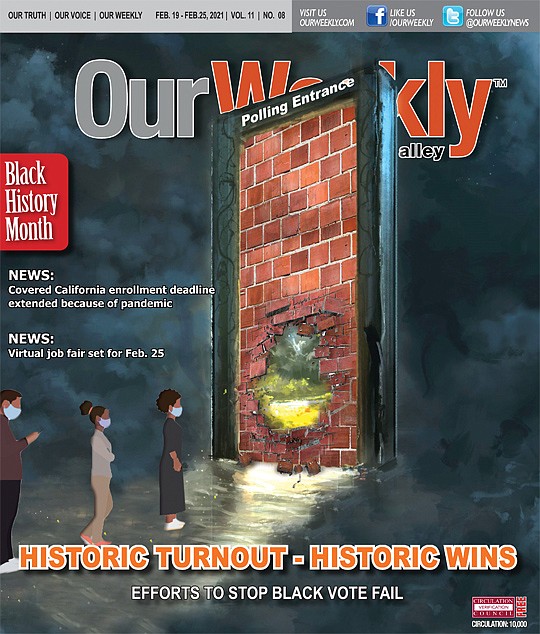 In August 2016, candidate Donald Trump was on a campaign swing just outside of Lansing, Mich. and delivered a blunt assessment of his view of the Black electorate:

A lot, as it would transpire over the next four years.

Then, in 2020, record numbers of Americans cast ballots—nearly 160 million—but African-American voters were a critical demographic that helped determine the final outcome of last year’s presidential election.

Cities with large Black populations (i.e. Philadelphia, Detroit, Milwaukee and Atlanta) bolstered Joe Biden’s lead in key battleground states that the Democratic Party lost in 2016. The Pew Research Center estimated that the number of African-Americans eligible to vote for president hit a record 30 million in 2020. More than a third of those voters lived in key battleground states.

Up to 90 percent of Blacks voted for Biden

It is estimated that 87 percent of Black voters nationwide chose Biden over Trump. While the former president attracted about 19 percent of the vote from Black men (9 percent of Black women), the tally was far from what he needed to convince this demographic that its fortune and posterity were better off in the hands of the Republican Party. An Associated Press Vote4Cast survey conducted about a week after election day confirmed the Black turnout for Biden at 90 percent overall.

Michael Steele, former chair of the Republican National Committee, said Black voters saw an assault on democracy and “didn’t like it.”

“This happened despite 401 years of just utter crazy B.S. and racism and all of these other narratives that have roiled within and around the Black community,” Steele explained. “In those areas where Republicans expected the status quo, Black voters said: ‘Hold up.’ And the results turned out differently.”

It is telling that, in the 2020 election, Republicans would code White supremacy as a form of concession to gains made by the Civil Rights Movement. To paraphrase the late campaign manager Lee Atwater, infamous for the Willie Horton campaign that helped to push George H.W. Bush into the White House in 1988, “overt racism was once a winner.” But after the late 1960s, it backfired. Republican rhetoric grew more and more abstract, so that “forced busing” became “welfare queen” to “tax cuts” and “family values.” White racists heard one thing, while White voters—who didn’t want to be seen supporting the latter—heard something else entirely. Both ended up voting Republican.

While the 1965 Voting Rights Act was designed to put teeth into the 15th Amendment, some White conservatives—particularly those in politics—have clung to an irrational fear of the Black vote. The legislation would command federal oversight or states and localities with histories of voter discrimination.

This misplaced anxiety among a large swath of White voters was on full display after the election when Trump tried to throw out the votes in the states he lost, and specifically in the above-mentioned cities.

This futile attempt to disenfranchise Black voters is considered by many legal scholars as a direct violation of the Voting Rights Act, so much so that the Michigan Welfare Rights Organization and private citizens Maureen Taylor, Nicole Hill and Teasha Jones filed suit in late November in the United States District Court for the District of Columbia against Donald J. Trump and Donald J. Trump for President, Inc.

The 124-page complaint, filed by attorneys with the NAACP Legal Defense and Educational Fund (LDF), makes note of efforts to “pressure state and local officials not to certify election results in key states and then have legislatures override the will of the voters by installing a ‘slate of electors’ loyal to the Republican Party.”

Alas, the lawsuit will likely go nowhere because, in 2013, the United States Supreme Court essentially gutted the Voting Rights Act in the case Shelby County v. Holder. They ruled as unconstitutional two provisions: Sec.5 which required certain states and local governments to obtain federal preclearance before implementing any changes to their voting laws/practices, and Sec. 4(b) which contained the coverage formula that once determined which jurisdiction are [subjected] to preclearance based on their histories of discriminating against Black voters.

The lawsuit further states that “...Trump and his campaign are openly seeking to disenfranchise Black voters, including voters in Detroit, Mich.”

Sherrilyn Ifill, LDF president and director-council, said of Trump’s ill-fated effort to disqualify millions of Black ballots as the “...use of dog whistles to suggest the illegitimacy of votes cast by Black voters in Detroit, Philadelphia, Milwaukee and Atlanta are an appeal to a dangerous and corrosive racialized narrative of voter

fraud.” Evidence of Ifill’s concern would come on Jan. 6 when a large band of Trump followers tried to overthrow the nation’s seat of government.

The power of the Black vote was unleashed when South Carolina Rep. Jim Clyburn, House majority Whip and the highest-ranking African-American in Congress, endorsed Biden three days before the South Carolina primary.

Democratic voters said Clyburn’s endorsement was an important factor in their decision to vote for Biden who was swept into office in a rare presidential mandate. Biden acknowledged Black voters during his victory speech in declaring “the African-American community stood up again for me. You’ve always had my back, and I’ll have yours.”

An equal share of credit can be given to Stacey Abrams of Georgia who marshaled Black voters to deliver wins for Biden and for Sens. Raphael Warnock and Jon Osoff. “We have seen dramatic turnout among communities that, typically, are not at the top of the mind for candidates,” Abrams said. “We have seen them to be engaged, and we have seen them turn out in a big way.”

Not all Black voters think the same

Both candidates realized that Black voters—or Black people in general—don’t all think the same. There is no monolithic Black constituency but, rather, there are vast distinctions in thought.

Sometimes these differences are related to geography. Sometimes it’s culture or religion. Age comes into play, as does gender and upbringing. But certain broad issues—racial injustice, economic inequality, voter suppression, law enforcement bias, better schools and more access to health care services—resonate deeply within the Black community. The Biden-Harris ticket was much better able to speak to these issues with empathy than did the more conservative opposition.

The NAACP worked feverishly to encourage the Black vote in Georgia.

They spent millions of dollars, especially in swing states, to encourage voters to get to the polls. Florida was part of that focus as well.

“This was the most strategic and largest initiative for voters,” said NAACP President Derrick Johnson. He said the historic civil rights organization spent $15 million across the states of Georgia, Florida, Michigan, Pennsylvania, Wisconsin, Texas and Alabama. Johnson further explained that the NAACP’s effort wasn’t simply about getting people to vote, but in getting people who are engaged in the community to encourage other people to register and vote.

Black political power in 2020 was the culmination of four years of intense activism—and intense pain. It was the year that African-American voters finally felt their power—The Democratic Party felt it as well. Black voters, deprived of the vote for centuries, have always taken that right seriously despite staunch opposition and resentment from the larger public. Last year brought a new intensity for Black voters, and a new intensity of focus on them as well.

Effectively, the power of the Black vote was clearly evident as witnessed by Kamala Harris’ historic role as the first Black/South Asian vice president—and by Biden’s efforts to carve out a far more diverse cabinet than his predecessor.

‘Joy to the Polls’

“Black people are both taking and being given more agency within the Democratic Party,” said Howard Franklin, a Democratic strategist, “and that’s a conversation that’s a long time coming. The tectonics of racial politics are shifting.”

There was something else that bolstered Black voters who were undaunted in the face of a pandemic, long lines and cold weather. Much like the “call-and-response” serenade of field slaves, Black people married music with a political movement, a tactic not unfamiliar from the gospel song-turned-civil rights anthem “We Shall Overcome” to “The Bigger Picture,” rapper Lil Baby’s ode to the Black Lives Matter protests.

It was the impromptu “Joy to the Polls” or a series of “pop-up activations” around the country that showed up at polling stations with DJs spinning tunes and hosting mini concerts. In Georgia, these events featured appearances by actresses America Ferrera, Eva Longoria, singer K. Michelle, as well as rappers Mulatto, Rick Ross and Moneybagg Yo. In Atlanta, sorority sisters paid homage to their AKA sister Harris in embracing their “Stroll to the Polls” as they danced to Lizzo’s “Like a Girl”:

Even if there ain’t no precedent, switchin’ up the messaging.”

“Black joy is an essential part of Black cultural expression,” said Nsenga Burton, a film and media professor at Emory University in Atlanta. “2020 showed that Black people continue to choose happiness and joy in the face of great adversity. And that can never be taken away from us.”