Another star of Black History falls 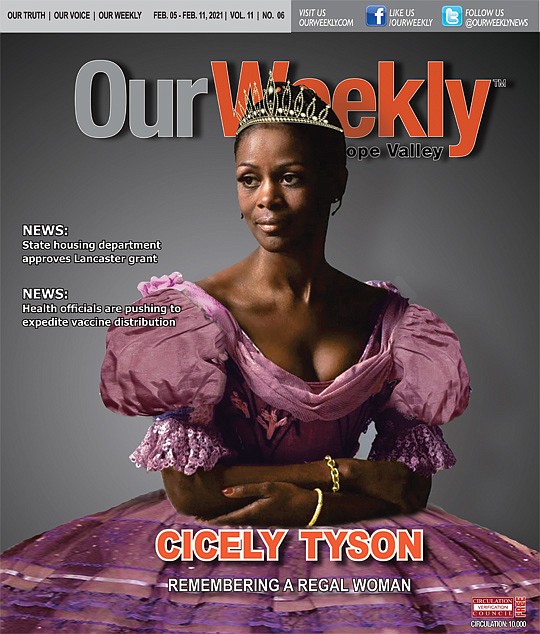 A queen of Black Hollywood, a treasure, a personification of beauty. That’s how some described Cicely Tyson, who died Jan. 28 at the age of 96.

Before leaving, she gave fans a lifetime body of work and inspired the nation in the life she lived. Born in Harlem, N.Y., Tyson decided at an early age to become an actress. She also worked as a fashion model—all much against her mother’s wishes.

“My mother told me that if I was going to do that, I had to leave her house. And so I did,” Tyson said. She then moved in with a friend and borrowed clothes to go on auditions.

“After I moved out, my mother didn’t speak to me for years. She was concerned that I was going to live a life of sin—that’s what she thought show business was all about,” Tyson said. “But I was always determined to prove her wrong. And so my mother became my greatest source of drive in life. I thought, I’ll show her!”

And show her she did

Tyson worked as a model but later attended the Actors Studio and began her career on stage. She made small appearances in several films in the late 1950s, including Sidney Poitier’s “Odds Against Tomorrow,” before becoming a television regular in the 1960s, with appearances in shows such as “East Side/West Side,” “I Spy,” “The F.B.I.,” “The Courtship of Eddie’s Father” and “Medical Center.”

Early in her career, Tyson decided to never take roles that reflected badly on African-American people. She turned down roles for prostitutes and other parts, preferring to give the world other ground-breaking, memorable roles.

In 1963, Tyson became one of the first African-American actors to co-star in a network television series when she appeared as a regular with George C. Scott in the critically acclaimed, “East Side, West Side,” a gritty program about New York social workers.

After several small television appearances, the turning point in her career came in 1972 when she played Rebecca Morgan, a woman holding her household together during the Great Depression while her husband was in jail for stealing food for the family. Her performance in the movie, “Sounder,” earned her an Academy Award nomination as well as a Golden Globe nomination for Best Actress in a Motion Picture.

In 1974, she won two Emmys; both for “The Autobiography of Miss Jane Pittman.” One for Outstanding Lead Actress, Mini-Series or Drama; and a special Emmy for Actress of the Year. She also portrayed Coretta Scott King in “King: The Martin Luther King Story” and Harriet Tubman in “A Woman Called Moses.”

She won another Emmy in 1994 for her supporting role in “The Oldest Living Confederate Widow Tells It All.”

But Tyson also sought to give back to her community. When Martin Luther King Jr. was killed in 1968, she received a call from her friend Arthur Mitchell, the first African-American principal dancer in the New York City Ballet. Mitchell wanted to do something in King’s honor, and together, the friends decided to found the Dance Theater of Harlem.

Her next notable, Emmy-nominated role was as Kunta Kinte’s mother, Binta, in the 1977 historic mini-series “Roots.” In tribute, Levar Burton who played her son, the young Kunta Kinte, called Tyson “Quite simply one the most beautiful and talented women of her generation.”

“Elegance, style and natural grace oozed effortlessly from every pore of her being, but the word that describes her best in my mind is, regal,” he added.

Tyson was married twice and had a daughter, who she always referred to as Joan to protect her anonymity. She spoke about their relationship in her memoir, “Just As I Am,” which she was promoting at the time of her death, choosing to keep her daughter’s real name private.

She dedicated her memoir to her daughter as “the one who has paid the greatest price for this gift to all,” and signed the dedication, “Love, Mom.”

Her second marriage was to jazz legend Miles Davis. They had dated in the 60’s and later rekindled their relationship in 1978. Married on Nov. 26, 1981, in a ceremony conducted by Atlanta mayor Andrew Young at the home of actor Bill Cosby, their marriage was tumultuous due to Davis’ volatile temper and infidelity. They divorced in 1988. Davis died in 1991.

“I loved him and he loved me and of that fact, I am certain,” said

Tyson during an interview during her book tour. Tyson recalled Davis’ last words before his death: “[He said,] ‘Tell Cicely I’m sorry.’”

In more recent years, Tyson received four Emmy nominations for her appearances as Annalise’s mother, Ophelia Keating in the series, “How to Get Away With Murder.” In her lifetime she received 17 Emmy nominations.

The Cicely Tyson School of Performing and Fine Arts, a magnet school in East Orange, N. J., was named after her in 2009.

She also received a Screen Actors Guild Award as a member of the ensemble cast of 2001’s “The Help.”

Tyson returned to Broadway in 2013 and was awarded the Tony award at the age of 88 for her performance as Carrie Watts in “The Trip to Bountiful.” Then again returning to Broadway in 2015 to star with James Earl Jones in the two-person play, “Gin Game.”

More accolades followed. She received a Kennedy Center Honor in 2016 for her lifetime of achievement. The Academy of Motion Picture Arts and Sciences presented her with the Honorary Academy Award for Lifetime Achievement in 2018. Tyson was the first African-American woman to receive an honorary Oscar.

In 2018, Tyson was inducted into the American Theater Hall of Fame.

She was chosen to be inducted into the Television Academy’s Hall of Fame in 2020.

Her most recent film appearance was in last year’s “Last Flag Flying.”

Tyson also received a Peabody Award (given in recognition of outstanding public service and achievement in electronic media) for Lifetime Achievement in 2020. Over the years she received numerous honorary degrees from various universities.

“There is no one who has done more for the images of Black people than Cicely Tyson,’’ organizers of the Pan African Film Festival said in a statement. “On and off the screen, Ms. Tyson was led by her moral compass, never compromising her values. She was a strong advocate for Black actors and film crews, often taking roles that addressed racial issues, such as Rebecca Morgan in ‘Sounder’ and Jane Pittman in ‘The Autobiography of Miss Jane Pittman.’ She will be forever remembered by the strong images of Black women she portrayed on television, in motion pictures, and on the stage.’’

The Los Angeles Urban League called her a “legendary Hollywood icon & symbol of inspiration for the Black community.’’

In 2016, Tyson received the highest award given to civilians: The Presidential Medal of Freedom, presented by President Barack Obama.

“Across all of her performances, in legendary productions ranging from “Sounder” to “The Trip to Bountiful” to “The Autobiography of Miss Jane Pittman,” she helped us see the dignity within all who made up our miraculous and, yes, messy American family,” Barack Obama wrote on his Instagram page.

“She was the personification of beauty, grace, wisdom, and strength, carrying forward a flame that not only guided her for 96 pathbreaking years but lit the way for so many of us,” Michelle Obama wrote in a separate post. “I’ll miss her dearly, but I smile, knowing how many people she inspired, just like me, to walk a little taller, speak a little more freely, and live a little bit more like God intended.”

One of Tyson’s godchildren, Lenny Kravitz, wrote in tribute. “With inimitable style and grace, my dear Godmother Miss Cicely Tyson made her grand exit to the heavens,” Kravitz wrote. “She lived a remarkable life up to the last moment.”

Kravitz lauded his godmother as “a true pioneer, who bared her heart and soul so we could witness the spirit of the characters she so brilliantly portrayed, which continue to move and inspire generations. A Black queen who showed us how beautiful Black is.”

Side note: TV One will pay tribute to the life and career of Cicely Tyson on Feb. 20, at 5 p.m. with a special airing of the 1972 classic film, “Sounder.” Based on the young adult novel by William H. Armstrong, “Sounder” tells the story of the Morgans, a family of poor Black sharecroppers in the Depression-plagued South as they struggle to find enough to eat despite the help of their hunting dog, Sounder.

When father Nathan (Paul Winfield) resorts to stealing food, he is captured by police and sent to prison, and his wife, Rebecca (Cicely Tyson), is left to care for their son, David (Kevin Hooks). Though Sounder has run away, David never gives up hope that his dog will return, just as he believes that he will see his father again someday.