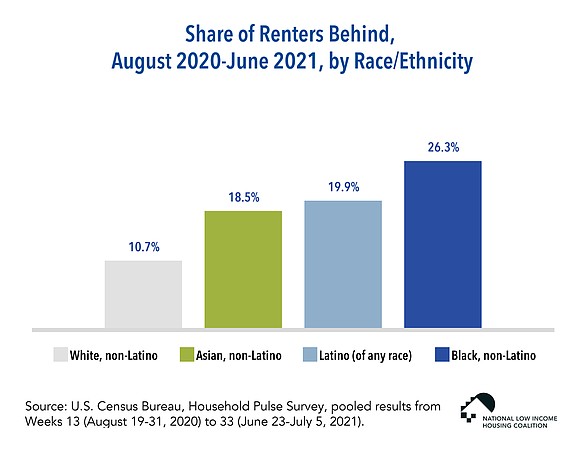 On August 4, an estimated 11 million American consumers facing imminent evictions gained a short-term reprieve, thanks to an eviction moratorium extension ordered by the Centers for Disease Control and Prevention (CDC).

Effective August 3 through October 3, counties experiencing substantial and high levels of COVID-19 levels, many of which are driven by the surging delta variant are eligible for 75% of the approved $46 billion still available. The Consumer Financial Protection Bureau has an online Rental Assistance Finder at www.consumerfinance.gov/renthelp, designed to connect renters and landlords with state and local programs distributing federal emergency rental assistance (ERA) nationwide.

It is critical for states and localities to turn their attention to distributing ERA funds more quickly. Program administrators can and should utilize the flexibilities the Treasury Department provided, and ensure that programs’ barriers – like burdensome documentation requirements – are minimized.

According to CDC Director Dr. Rochelle Walensky, “The emergence of the delta variant has led to a rapid acceleration of community transmission in the United States, putting more Americans at increased risk, especially if they are unvaccinated. This moratorium is the right thing to do to keep people in their homes and out of congregate settings where COVID-19 spreads.”

The action came on the heels of a ‘sleep-in’ protest on the steps of the Capitol, led by freshman legislator Rep. Cori Bush. Representing St. Louis and adjoining areas, Ms. Bush herself was once a homeless single mother, and vowed that the peaceful protest would continue until actions were taken to protect renters. She is also a registered nurse, ordained pastor, and the Deputy Whip for the Congressional Progressive Caucus. Her activism first gained public attention following the death of Michael Brown, Jr. in Ferguson, MO.

Upon learning of the CDC moratorium extension, Rep. Bush said, “Over the last five days, our movement has received support from many of our House and Senate colleagues. Especially as a formerly unhoused person, I am grateful to each and every one of them for recognizing and working to end this eviction emergency and for amplifying the call to extend the eviction moratorium. It will take all of us working together to get this done. Each day that passes without a federal moratorium is another day of evictions, uncertainty, and instability for millions of people who are at risk of being removed from their homes.”

Only a few days earlier on July 27, the House Select Subcommittee on the Coronavirus Crisis, led by South Carolina Congressman Jim Clyburn, heard from another single mother, Katrina Chism of metro Atlanta, who testified to her lengthy and ongoing struggle to keep a roof over her family’s head.

“The fear of homelessness became a reality for me,” testified Ms.Chism. “I had never faced this type of stress before and I had no idea what I was going to be able to do with little income and no home…. In May, I ended up moving to another county further outside Atlanta, where I felt forced into a lease where my rent increased by several hundred dollars per month. I went from paying $1245 to $1600. It was really expensive to move. I had to pay for (movers, a U-Haul junk remover, a large deposit, application fees, etc.).”

Her testimony went on to recount details of the personal ordeal she endured that began with an August 2020 job layoff. During the two months it took to secure alternative work, she fell two months behind on her rent. On February 12 of this year, she applied for rental assistance - the first day that the Tenant-Landlord Assistance Coalition in DeKalb County began accepting applications. Her approved application was sent to Atlanta Legal Aid to help negotiate a resolution with her landlord using rental assistance through the county.

A month later in March, Ms. Chism again lost her job. Her legal aid attorney tried to negotiate repayments with the landlord over several weeks, including an updated proposal with higher numbers when another month’s rent was due. But by mid-April, the landlord rejected the proposal and issued notice that the lease set to expire in mid-May would not be renewed. The alternative housing for herself and her son prevented the family from becoming homeless; but the rent charged with the new landlord rose by $355 each month.


“I felt expendable, and they showed me I was”, testified Ms. Chism. “I was not given any consideration as a long-term tenant with no evictions on my record ever. I felt as if I had broken the law somehow while we were in the middle of a pandemic…. There are so many people in this situation, and it is unfair. There is assistance out there to help relieve everyone of financial burden, but when corporations are greedy, they ignore the everyday person doing everything they can to survive.”

According to a related Aspen Institute report: “Currently, 22% of Black renters and 17% of Latinx renters are in debt to their landlords, compared to 15% overall and 11% of White renters. Rental debt is also challenging for renters with children, with 19% unable to make payments.”

Even so, in early June four private real estate entities joined with the Alabama and Georgia Associations of Realtors in an appeal to the U.S. Supreme Court for an emergency ruling to end the nationwide moratorium on evictions and foreclosures.

Suing the Department of Health and Human Services, the CDC, and the U.S. Department of Justice, the plaintiffs said in part that “the CDC shifted the pandemic’s financial burdens from the nation’s 30 to 40 million renters to its 10 to 11 million landlords— most of whom, like applicants, are individuals and small businesses—resulting in over $13 billion in unpaid rent per month.” The lawsuit also claimed that “the total effect of the CDC’s overreach may reach up to $200 billion if it remains in effect for a year.”

“In reality, the eviction moratorium has become an instrument of economic policy rather than of disease control,” stated the appeal. “And even if that were debatable, the same cannot be said for the lack of any public interest in prolonging unlawful Executive Branch action.”

In response, on June 29 the Court denied the realtors’ application, leaving the moratorium in place through the end of July. In a concurring one-page opinion written by Associate Justice Brett Kavanaugh wrote, “Because the CDC plans to end the moratorium in only a few weeks, on July 31, and because those few weeks will allow for additional and more orderly distribution of the congressionally appropriated rental assistance funds, I vote at this time to deny the application to vacate the District Court’s stay of its order,” wrote the Associate Justice.

“In my view, clear and specific congressional authorization (via new legislation) would be necessary for the CDC to extend the moratorium past July 31,” concluded Kavanaugh.

This opinion drove White House and lawmaker debates over whether the CDC had the legal authority to extend the eviction moratorium. It also explains President Biden’s remarks on the better-late-than-never order.

"Whether that option will pass constitutional measure with this administration, I can’t tell you. I don’t know," said President Biden. "There are a few scholars who say it will, and others who say it’s not likely to. But, at a minimum, by the time it gets litigated it will probably give some additional time while we’re getting that $45 billion out to people who are in fact behind in the rent and don’t have the money."

But neither the extension nor CDC remarks explain why emergency rental assistance sent to state and local jurisdictions is taking so long to reach consumers who desperately needed help.

Two weeks earlier on July 15, the National Council of State Housing Agencies (NCHSA) issued an open letter to landlords, urging swift actions to access available emergency rental assistance (ERA). By the end of June, state programs had processed more than 500,000 renters, roughly $3 billion in funds was projected to be dedicated by the end of July - leaving over $40 billion in approved funding untouched.

In other testimony at the July 27 Capitol Hill hearing, Diane Yentel, President and CEO of the National Low-Income Housing Coalition, addressed other reasons for rental assistance delays.

“The ability of states and localities to distribute critical ERA funds was hindered early on by harmful guidance released by the Trump Administration on its last day in office, January 19, 2021. … The Department of Treasury rescinded the Trump Administration’s harmful FAQ [frequently asked questions] and released a new one in February 2021 that directly addressed the significant flaws in the previous administration’s guidance,” testified Yentel.

With no end in sight for the global pandemic, Congress and the White House still bear the onus of developing more permanent solutions to the nation’s housing crisis.

Charlene Crowell is a senior fellow with the Center for Responsible Lending. She can be reached at Charlene.crowell@responsiblelending.org.