Lawmakers move to correct injustice in the South Bay 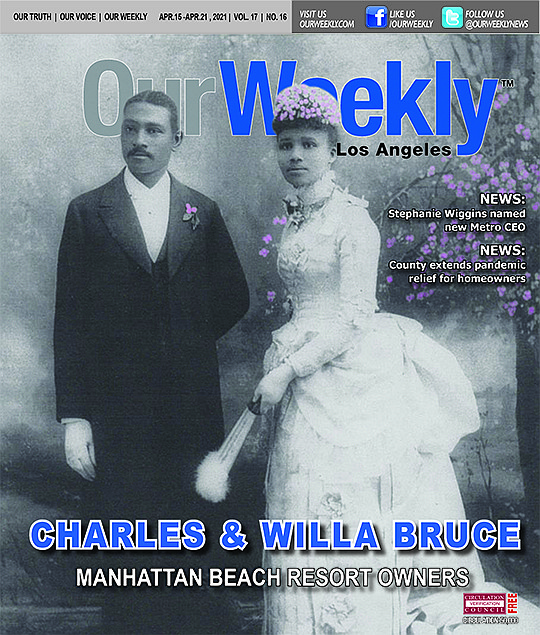 Charles and Willa Bruce. Our Weekly

“I think eminent domain is wonderful, if you’re building a highway, and you need to build, as an example, a highway, and you’re going to be blocked by a holdout, or, in some cases, it’s a holdout—just so you understand, nobody knows this better than I do, because I built a lot of buildings in Manhattan...” —Donald J. Trump in a Fox News interview, Oct. 6, 2015

Eminent domain “appertains to every independent government. It requires no constitutional recognition; it is an attribute of sovereignty.” Boom Co. v. Patterson, 98 U.S. 403, 406 (1879). However, the Fifth Amendment to the U.S. Constitution stipulates: “nor shall private property be taken for public use, without just compensation,” according to the Department of Justice website.

In theory, the concept of eminent domain gives a political entity the right to appropriate private property for the greater good, usually for transportation (especially construction of the transcontinental railroad during the United States’ westward expansion), natural resources, or other projects deemed necessary for the betterment of the public.

As with any legal construct, the potential for exploitation often equals whatever benefits might be gained through the seizure of given real estate. Our most previous chief executive used this technique in building his substantial real estate portfolio, and it allegedly was a motivation behind his push to erect a series of barriers on the pretext of curbing illegal immigration along the southern border.

The most prominent examples of this might be the acquisition of houses for what became the Santa Monica (#10) Freeway, and the seizure of houses, previously occupied by Mexican-Americans, in Downtown L.A. adjacent Chavez Ravine on the pretext of redevelopment (i.e., public housing) to construct what is now Dodger Stadium.

Lesser known is the history of displacement of other marginalized groups-including African-Americans-from valuable land along the area’s coveted and extremely valuable coastline. This includes the Belmar Triangle along with “The Inkwell” in what is now Santa Monica’s Civic Center.

As historian Alison Rose Jefferson notes, it was a thriving Black business area until eminent domain/urban renewal uprooted its residents in the 1950s. Well before that, another established beach haven for Blacks existed to the south in Manhattan Beach, called Bruce’s Beach.

By ChildofMidnight at English Wikipedia, CC BY 3.0, https://commons.wikimedia.org/w/index.php?curid=8690498

In 1912, a “colored” couple Willa and Charles Bruce began buying property along the ocean to provide a resort (including a cafe, dance hall, and lodge). In turn they were joined by other “Negroes” who bought adjacent cottages in the approximately two block long stretch, establishing a community and safe haven from the segregated surroundings of the era.

Their neighbors responded by initiating a pattern of harassment including cross burning abetted by the Klu Klux Klan, before officials condemned the area and, citing eminent domain, seized the property under the pretext of using it for a public park.

The Bruce couple received $14,500 as compensation for land worth in excess of $100,000. The land lay vacant for decades, before a lifeguard station and training center was established. Today, houses within the area have a median value in excess of $6 million (according to the Redfin real estate brokerage company), and the land itself is a mega million dollar property.

Deprived of their birthright, family descendants today are scattered across the country, and the parcels they owned were passed on to the state in 1948, and by 1995 to the county.

Retribution in a time of Reparations

“... no resident living in Manhattan Beach now is responsible for the racist actions of 100 years ago.” —Manhattan Beach City Councilman Joe Franklin, quoted in the beach cities newspaper Easy Reader

“... when I learned about what happened to the Bruces last year, (the) spirit told me I needed to do something.” —Activist, Actress, Doctoral Student, and Poet Kavon Ward

Manhattan Beach has not assumed a reputation for racial harmony over the years. A Black family’s home was firebombed with a gasoline soaked tire as recently as 2015 (the investigation is still unresolved).

Black beach goers attempting to partake of the local pastime of surfing regularly endure the pejorative taunt of the “N” word.

To its credit, the community rallied around the Clinton family, which encouraged their decision, no small choice for a couple rearing impressionable children who’ve endured the ubiquitous “N” word at school or in the neighborhood.

“They’ve each encountered something but once or twice in the nearly 20 years we’ve lived here,” said Melissa Clinton.

Four-year resident Kavon Ward enjoys the shops, restaurants, and other amenities in Manhattan Beach, but chafes under the realization that “...you’re not really wanted here.”

The premonition increases the closer one gets to the beach, she claims. A long-time advocate for social change, her increased visibility has drawn death threats via social media and other manifestations she chooses not to disclose. Becoming aware of the Bruce’s Beach saga prompted her to push ahead nonetheless, partially because of civic apathy.

“(The) Manhattan Beach City council is useless,” she claims, singling out the exception of (Mayor Pro Tem) Hildy Stern, whose efforts to author a formal apology received no support. “They continue to choose money over morality and profit over people. They epitomize White supremacy and are completely immune to change.”

The city did form a 13-member task force in October 2020, which recommended art installations and educational programs chronicling the historical legacy of the area, rather than tangible retribution for past indignities. The group was summarily disbanded last month, as the town hierarchy vacillates between a willingness to acknowledge past offenses and repudiation of civic responsibility.

This admission of culpability might leave the municipality open to lawsuits, and the stigma, in Franklin’s words, of painting “...the entire city at that time, or today, with the broad brush of racism.”

“The property that the Bruce’s purchased for $1,225 is now worth $75 million. We stand here today to introduce a bill that will correct this gross injustice and allow the land to be returned to the Bruce family.” —State Senator Steve Bradford (D-35)

“I am Chief Duane Yellow Feather Shepard of the Pocasset Wampanoag Tribe of the Pokanoket Nation. The Bruce's on my mother's side of the family are Mississippi Choctaw descendants who were slaves on the Bruce Plantations in Georgia and Cass County Texas.” —Duane R. Shepard, present at the Bruce's Beach press conference on April 9.

In the interim, publicity has drawn attention to this controversy, and the office of Los Angeles County Supervisor Janice Hahn has become involved. By Friday, April 9, she’d convened a press conference

attended by Bradford (a member of the recently formed state reparations task force), Holly Mitchell, State Assemblyman Al Muratsuchi (D-66), and other dignitaries, near the site where the Bruce’s resort once stood. Bradford announced the introduction of State Bill 796 (co-authored by Muratsuchi and Sen. Ben Allen (D-26)), the first step in allowing the County of Los Angeles to transfer the land to the Bruce family descendants.

If passed, the family can option to lease the parcel back to the county. Hahn and Mitchell intend to introduce a motion before their fellow supervisors to expedite the return of the Bruce’s property on April 20.

“Transferring the ownership back to the Bruce family not only aligns with the County’s commitment to equity but is also the right thing to do,” Mitchell said.

Duane Shepard contemporary custodian of the family genealogy, summed up the proceedings:

“Supervisor Janice Hahn and Holly Mitchell have enlisted Senator Steve Bradford to introduce legislation that will allow the County of Los Angeles to restore the land to the Bruce Family. It was introduced Monday 4/12. It requires a 2/3 vote of the State Legislature of which we have overwhelming support.”