The state of Black college student success in California 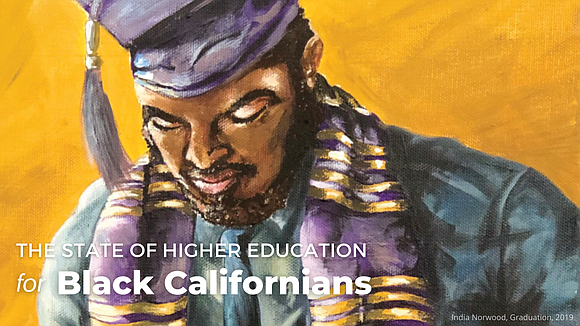 The State of Higher Education for Black Californians. The Campaign for College Opportunity

The Campaign for College Opportunity, a non-profit bipartisan policy and research organization, recently released “The State of Higher Education for Black Californians'' report, detailing the current state of college preparation, access and success for Black residents. The organization’s singular mission is to ensure all Californians have equal opportunity to attend and succeed in college in order to build a vibrant workforce, economy and democracy.

In summary, the report suggests a diverse approach to show that Black students matter. That’s because Black residents in California face certain social and economic realities like higher than average rates of unemployment, housing insecurity, food insecurity, incarceration and poverty.

Education advocates believe targeted, long-term support for Black students is needed to counteract “the devastating effects of COVID-19” that has hindered many schools and communities of color.

According to the U.S. Census Bureau, California has more than 2.1 million Black residents, which is the fifth-largest Black population in the nation.

For decades, researchers said Black Californians have played a major social, cultural and economic role in everything from the aerospace industry, entertainment, civil rights and local and state government.

However, researchers cite decades of inadequate public funding to predominantly Black schools, as something that had created a gap and a lack of access to high-quality schools and college preparation.

Advocates say that lack has contributed to multi-generational poverty and mass incarceration.

Meanwhile, similar data is being echoed by The Education Trust’s California Report Card, which shows that more can be done when it comes to educational equity for Blacks in California.

California received an “A+” for the level of enrollment of Black undergraduates at Community & Tech Colleges.

However, California received an “F” for the level of enrollment of Black undergraduates at four year institutions.

Similarly, California received a “B-” for the number of Black undergraduates who have received Associate Degrees.

However, California received an “F” for the number of Black undergraduates who have received Bachelor’s Degrees.

There is some good news

In the Black community, there is an understanding of the importance of a college education.

• 88 percent of Black 19-year-olds in California have a high school diploma.

• Two-thirds of Black Californians between the ages of 25 and 64 have enrolled in college.

• 26 percent of Black Californians have a Bachelor’s degree.

• The four-year graduation rate for Black students at the CSU has doubled over the past decade and now stands at 20 percent.

• More than 50 percent of Black students entering the UC since 2012 have graduated in four years or less and 75 percent in six years, the highest graduation rate across any of the higher education systems.

These positive statistics are the results of what advocates call historic reforms. For example, the UC Board of Regents decided to end the use of SAT/ACT in admissions. Something seemingly so simple, yet intimidating for so many, ended up contributing to a 20 percent increase in the number of Black applications to the UC system.

Meanwhile, UCLA and UC Berkeley saw even greater returns with a 50 percent increase in the number of Black applicants.

Another point of emphasis was to encourage Black students to enroll in and complete transfer-level math and english courses, which ultimately puts more students on a faster track to graduate.

There is also some bad news

When it comes to college access for California’s Black community, issues like implicit bias and unwelcoming campuses should not be understated, advocates say.

The effects of the global pandemic are also concerning because nationwide Black college enrollment fell 7.5 percent from fall 2019 to fall 2020, according to researchers. During that same period, enrollment fell 19.2 percent among Black men at the community college level in the U.S.

Specifically in California, 43 out of 60 community colleges that examined their enrollment data involving Black students, noted enrollment declines over the past year as well.

Researchers identified what they called systematic ways California is letting Black students slip through the cracks:

• Only 60 percent of Black graduates are enrolling in college within a year of finishing high school.

• Only one-third of Black community college students earn a certificate or degree, transfer to a four-year institution, or are transfer-prepared within six years.

• The gap in four-year graduation rates between Black students and white students at the CSU has increased from 21 to 25 percentage points.

• The four-year graduation rates at the UC are roughly 20 percentage points lower for Black UC students than their white peers.

• Among Black students who transferred in fall 2018, 38 percent enrolled in a for-profit university.

The report also offers a series of recommendations to improve Black students success.

“Race should not be substituted for income, location, or any other buzzwords often used when speaking about equity. Ensuring Black student success requires our state and education leaders work explicitly and deliberately to remove barriers to college degrees for Black students and close racial equity gaps,” Siqueiros said.

A top recommendation includes establishing an ambitious statewide goal to ensure 60 percent of Black adults hold a degree or high-value credential by 2030.

The goal would intentionally trigger a series of other critical reforms and practices that are deliberately meant to improve Black student success including rethinking public university enrollment caps, ending financial aid for low to no-value for-profit institutions, improving transfer, equitizing financial aid, ensuring all Black high school students are prepared for college, and ensuring faculty and campus leaders are representative of the Black community.

The report concludes that California’s policymakers and education leaders need to ensure that “equity is at the heart of their work”, ultimately ensuring a system of higher education in which Black students matter.

“This report reminds us that closing racial equity gaps is not achieved by a single silver-bullet policy but by investing in the ecology of postsecondary systems,” said Peter Taylor, ECMC Foundation president. “From improved K-12 connections to co-requisite remediation to the hiring of more diverse faculty, we know that the challenges our African-American students are facing have intersegmental roots and so they require intersegmental solutions.”