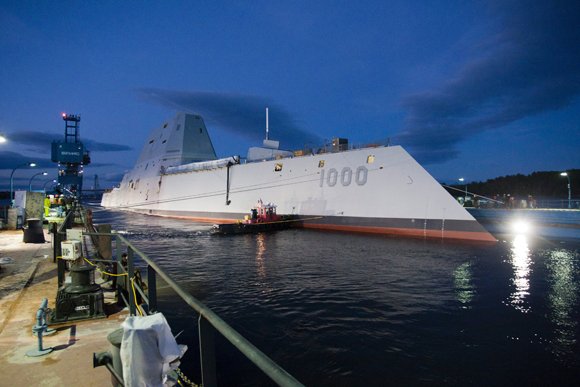 The Navy's newest warship slipped out of dry dock this week into the waters of Maine, marking a new era for war fighting at sea. The USS Zumwalt, the first of the DDG-1000 class of destroyers, is longer, faster and carries state-of-the-art weapons that will allow it to destroy targets at more than 60 miles, according to the Navy.

Four female officers are making historic strides for women of color in the Navy, reports People.

Commander Jones, Commander Simpson, Commander O'Cañas and Commander Wijnaldum are the trailblazing officers who will lead warships at the same time for the first time in Naval history.

The women, who are all based at the Norfolk Naval Station in Norfolk, Virginia, sat down for an interview with Lester Holt that will air on “NBC Nightly News” Friday (today), and opened up about how much has changed for women in the service and their hopes for the next generation.

"[The Navy] looks different in the fact that as an ensign, I looked around and at that time, there were not many senior female officers that I could necessarily go to for gender-specific questions," Commander Jones, who joined the Navy in 1999.

“I may not have felt comfortable asking my male boss,” she continues. “Now, to their credit, they were phenomenal leaders. However, when it came time [for] some of those more intimate conversations on how to plan your career with a family, as a mom, that did not exist.”

During their conversation, the women also speak candidly about their accomplishments — all are nuclear-qualified commanders, which means their next duty station could involve an aircraft carrier — and the importance of promoting STEM education to women.

For Commander Simpson, she says she was never personally discouraged from achieving her goals but didn't have many female leaders to look up to or emulate.

Despite that, Simpson says she's hopeful for the future of women in the service.

"The Navy has been very supportive of my journey and my professional training. There weren't any voices in the Navy that said that I could not achieve this goal," Simpson says. "The only limitation was the fact that women as a whole hadn't been on board combatant vessels until, I believe, it was 1994."