Black investors want to bring NFL football back to Oakland 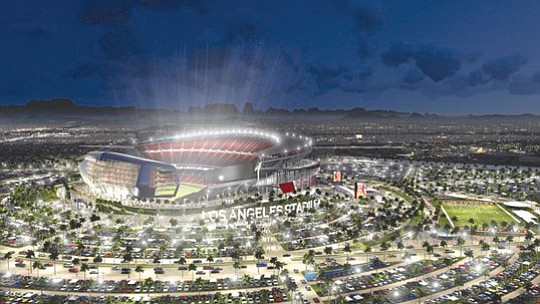 The African American Sports & Entertainment Group (AASEG) — which was founded with a primary purpose to create economic equity within the Black community through sports — is on a mission to become the first Black-owned ownership group in the NFL to bring professional football back to its city of Oakland, CA, reports Afro Tech.

According to the Undefeated, the group has put in a bid on the Oakland Coliseum site with a plan to get a professional football team back in its hometown and make history in the process.

The outlet reports that there are owners in the league that represent a total of 32 NFL teams — two that are people of color and none of which are Black. AASEG is hoping to change that and create a historical moment that will break the existing color barrier inside the league, allowing Black people to have a piece of the pie, too.

“We feel like this is a Jackie Robinson moment,” Raymond “Ray” Bobbitt — the creator of AASEG and founder of an Oakland-based facility management and urban consulting company — told the Undefeated. “Typically when African Americans break barriers, it opens up barriers for all people who are marginalized.”

The first order of business for the AASEG is to make this happen is to acquire Oakland’s share of the Oakland Coliseum site — which is home of the MLB’s Oakland Athletics. In addition to the AASEG, there are two other groups that are vying to purchase the city’s share of the site.

“The city has received several letters of interest in the Coliseum from various interested parties including AASEG,” Karen Boyd — the Oakland citywide communications director — said. “The city is looking forward to receiving a more detailed written proposal from AASEG and other interested parties in order to fully consider their offer.”

If the AASEG can get over that hurdle, its next step will be to build a new stadium and secure an NFL team. However, the biggest challenge there is that NFL ownership rules state only individuals can own teams, with the controlling owner holding at least a 30 percent stake in the team.

The only way the AASEG would be able to get around that rule is if the NFL owners make an exception for the group.

According to Black Enterprise, the ASSEG had a discussion with the NFL sometime last year in regards to its unfair ownership model and hopes that those discussions will continue in the near future.

In addition to bringing football back to Oakland, the group has another goal to also build “Black Wall Street 2,” which would closely resemble the vibrant district of Black businesses that existed in Tulsa, Oklahoma in the early 20th century.