‘RUN for It - Stories of Slaves Who Fought for Their Freedom’ 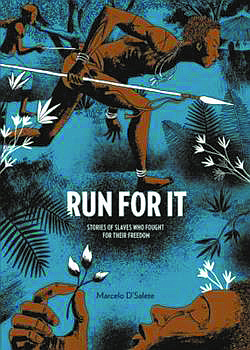 An estimated 40 percent of African slaves ended up in Brazil. That’s more than any other country that trafficked slaves from Africa.

The Atlantic slave trade to the South Americas started before it was continued in the U.S. and was split into four periods. The first one, was the Cycle of Guinea, in the 16th century, and continued with the Cycle of Angola in the 17th century, which traded people from Bakongo, Mbundu, Benguela and Ovambo. The third was the Cycle of Costa Mina - which was renamed to the Cycle of Benin and Dahomey - and went on from 1800 - 1815. It trafficked people from Borno, Nupe, Yoruba, Ewe, Minas and Hausa. And last but not least, the illegal trafficking phase, from 1815 - 1851.

In most of his praised work D’Salete talks about the brutal reality of slavery in Brazil and its plantations, as well as Black resistance.

In his graphic novel,”Run for It: Stories of Slaves Who Fought for Their Freedom,” D’Salete talks about the rebellion of the Bantu tribe, who were forcibly brought from modern day Angola and Congo.

During a 300 year period, from 1500 - 1800, millions of Bantus were brought to Brazil. Many of them either rebelled against slavery by either running away to refugee-settlements known as “Mocambos,” or by small acts of revolt on the plantations - expressing the frustrations and violence they experienced from their masters.

In “Run for It,” D’Salete illustrates five different stories about slaves who try to escape. Since it’s a graphic novel, it’s longer than a comic book and more complex. Although the art is simply black and white, it captures the complexity of each story and the intensity of the runaway slaves, as well as the masters who try to catch them. D’Salete also incorporates some Bantu symbols, with their terms and meanings sprinkled throughout the novel.

“Run for It,” is a violent and emotional, yet beautiful graphic novel, in which D’Salete highlights the sexual violence of the masters, as well as love and death of the slaves, and the emotional distress that follows.

Because there aren’t any happy endings - due to the reflection of reality lived by the Afro-Brazilian slaves- it’s more suited for adults or teens than young children.

“Run for It: Stories of Slaves Who Fought for Their Freedom,” won a 2018 Eisner Award in the Best U.S. Edition of International Material category.