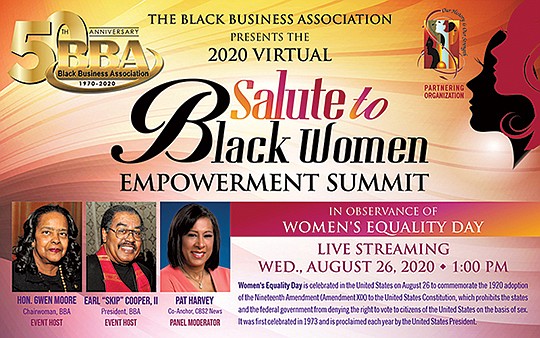 The Black Business Association (BBA) “Salute to Black Women Empowerment Summit” included a special salute to its chairwoman, Gwen Moore, who made her transition just a week before the event.

“Let’s not forget the contributions that Gwen Moore made to our state that have been so helpful to women and people of color,” said Rep. Maxine Waters (D-43), referring to Moore’s opening the door to supplier diversity while on the state assembly’s utilities and commerce committee.

“Gwen Moore was pioneering in an era that African-Americans had never been involved in: The energy and utility regulation issues,” said former Assemblyman Willie Brown. “Not only did she become the pioneer, but she became an architect in that scene.”

“Everything about Gwen was about making sure we get out and vote and stand up and lead,” Bass said. “She encouraged me in the 2004 campaign to take her seat in the 47th District. One of the most important contributions we can make is to continue to lead and look back and encourage the next generation of leaders.”

“While small in stature, she was a force of nature,” said Assemblywoman Autumn Burke. “Gwen and my mother instilled in me a sense of service at an early age.”

Burke said she firmly believes in the mantra “We lift as we climb.”

Burke’s mother, retired County Supervisor Yvonne Brathwaite Burke, was also featured during the virtual summit, which was held in observance of Women’s Equality Day, commemorating the 1920 passage of the constitutional amendment granting women the right to vote.

“First of all, the most important thing is for us to get out and vote,” said Brathwaite Burke.  We have to get everyone to understand that We have to participate.”

The former supervisor believes that the time has come and participation is especially necessary for African-American communities, in particular, and it is essential that they “strike when the iron is hot.”

“We’re going to have to make sure we can take advantage of the headlines,” Brathwaite Burke said, referring to the calls for public safety reform measures following the recent rash of police shootings across the nation. “We have to take advantage of all the guilt… and turn that into opportunity.”

Brathwaite Burke said that the task is up to everyone, even though Blacks are a fraction of the total population, it’s a population that must be considered and must create and maintain voices at the city, county, federal and state levels.

“Speak up, wherever you are,” she said. “We’re all on boards, organizations, businesses. We are in trouble. We have to really do twice as much work now, as we go into reapportionment. We’re going to have to be on top of those committees.”

“COVID-19 has brought it to home to us -- the very necessity of women to be at all the tables,” said Celestine Palmer of the LA African American Women’s Public Policy Institute (LAAWPPI). “When women speak, we are speaking for the entire family and our community.”

Palmer said that the pandemic has highlighted disparities in the health system and a recognition that the justice system needs to be reformed.

“These health disparities in the system stem from a lack of pay equity,” Palmer said. “They all go together. The higher the pay, the higher the medical that comes with the package.

“The justice system also has to be higher in our priorities,” she added, noting that each state has a different way of handling public safety. “I think we should look at a justice system that applies to the entire United States.”

“We have to be more engaged in working with these elected officials,” she said. “Visit your local officials. When I was trying to do little things. I would just go to Gwen’s office and talk to her. I feel we elect people and then we just forget about them. Stay in touch with your leadership.”

Patrice Marshall McKenzie, a local public affairs professional, also chimed in, saying that the unique health needs should be prioritized.

“I think it’s absolutely vital that women show up at the ballot box, otherwise, we will not be able to lift up the unique needs of our community,” she said. “I was at Cal when proposition 209 passed and I saw the precipitous decline of Black student enrollment.”

The afternoon’s panel also included Tiffany Okeani, a rising senior at Cal Berkeley and an “activist student” who is facing her first voting opportunity in a presidential election.

“Black women oftentimes spearhead movements, but rarely become the stars,” Okeani said, noting that she supports criminal justice reform, defunding the police and moving some of those resources toward the educational system. “I do believe that progress has been made, given the history of this country.”

The other participants were impressed with Okeani, the youngest speaker of the day, who insisted that the voices of Black women have to be heard, especially at this point in history.

“We have to fill in the cracks that society intentionally lets us fall through,” Okeani said. “The way we make people listen is by voting. We are not going to be taken for granted. Black women oftentimes are not doing things for ourselves. Often we do things for our community. We have to take up more space.”

“Black women are emerging as an electoral powerhouse and we’re facing one of the most pivotal elections in our nation’s history,” she said. “I hope that you will get out and vote Nov. third as if our lives depend on it, because in fact, they do.”

Another panelist, Alene Brown-Harris of the North American Chapter of the National Congress of Black Women, agreed, saying new strategies would be necessary to make new changes. Both the completion of Census 2020 papers and the votes of Black women can make a difference.

“I feel our democracy is on the ballot,” Brown-Harris said. “Being a part of this struggle is going to be very positive for the entire world. Voting is going to make major changes in this world. As soon as my absentee ballot comes in, I’m going to fill it out and mail it right away.”