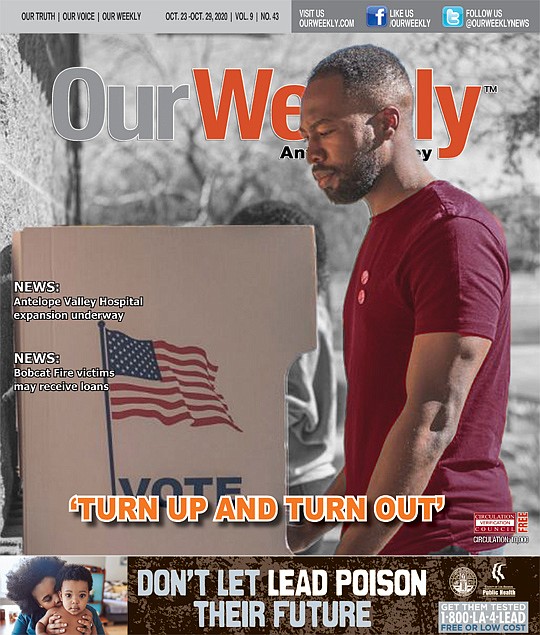 African-American men across the country are pledging to “turn up and turn out” at the polls on Nov. 3.

There's good reason for the newly-found enthusiasm. In 2016, turnout among Black men aged 18-29 was reportedly 22 percent lower than in 2012. If the trend holds 12 days from now, Black voter turnout could conceivably drop by 30 percent, resulting in an estimated five million fewer votes cast nationally.

Policies like new voter ID requirements and felony disenfranchisement have worked in recent years to suppress the Black vote, but one organization is working to turn around those numbers to significantly increase turnout—specifically among Black men.

BlackMenVoting.com was joined recently by civil rights groups to announce the launch of a vast voter outreach campaign to increase the participation of Black male voters. It's aimed at the Biden/Harris 2020 campaign. Beyond the political leanings, however, they want more Black men at the voting booth (or in this election season submitting mail-in ballots) to bring to mind and reinvigorate the hard-fought battles African-Americans have endured to cast a ballot.

“We are committed to getting out the vote this election,” said Darrell Goode, president of the Santa Monica-Venice branch of the NAACP. “We must regain our stakeholder power base. This campaign is vital to make our voice heard not only in this election season, but going forward as well.”

The campaign is targeting Black men in Michigan, Pennsylvania, Georgia, Florida and in North Carolina—not by coincidence so-called “battle ground” states that the Democratic Party wishes to carry if it is to regain the White House and Senate.

Admitting that Kamala Harris would be a “motivating factor” for Black men to vote, the group has pointed to a donation of $17 million from former candidate Mike Bloomberg to increase turnout in Florida. Locally, The 100 Black Men of Los Angeles has become a major supporter of not only the voting drive, but also participation in the 2020 Census. They see the two issues working hand-in-hand to increase sociopolitical visibility among Black men.

In 2016, the Pew Research Center released a rather unsettling report suggesting that Black men may be more likely to stay home than Black women, thereby representing a vastly untapped voting block for either major party to covet. Apparently, 64 percent of eligible Black women voted four years ago, compared to 54 percent of eligible Black men. College-educated Black women were only slightly more likely than college-educated Black men to report turning out to vote in 2016 (74 percent to 71 percent). By comparison, White men and White women were reportedly more likely to say they voted than their Black counterparts  (67 percent of White women and 64 percent of White men in 2016).

“It's an urgent matter that voter turnout among Black men be significantly increased this year,” said Rev. William Smart, president/CEO of the Southern Christian Leadership Conference (SCLC). “The persistent issues of homelessness, poor education, job loss within the Black community are motivating  factors for this campaign. We fully believe we will increase the level of Black men turning out to vote. The stakes are far too high to stay home on election day.”

Heart and Soul Studio based in South Los Angeles has played a pivotal role in getting out the word to African-American men just how important their vote is. “They've been a 'drumbeat' to encourage the Black male vote nationwide,” Goode said.

Four years ago, African-Americans comprised about 20 percent of all Democratic voters, according to exit polls taken then by the Pew Research Center. That's about the same percentage of Democrats identified as “very liberal” in the average 2016 primary compared with the percentage of Democrats who said they were Black. In other words, Black voters make up the same part of the Democratic Party as the two parts that tend to draw a lot of attention for their reported “growing power”: College-educated Whites and very liberal voters.

But it's more than being just a group of voters readily counted on to help push a candidate over the top. Black voters have often voted in blocs in presidential primaries and in general elections. Black voters have voted very similarly to one another in recent competitive contests. Hillary Clinton won about 80 percent of the Black vote in the 2016 primary season, as did Barack Obama during his 2008 primary run.

Voting as a bloc means that a group can be decisive, and while no one can say with certainty how Black voters will turn out for either presidential ticket on Nov. 3, there are clear indicators that no candidate has a Clinton- or Obama-like edge with them. Black voters have a lot of diversity within their ranks, so it could be the case—albeit it unlikely—that they won't vote as a bloc this year. Polling taken for the past three months, however,  indicates heavy support among Black voters for the Biden-Harris ticket.

Party loyalty notwithstanding, the issue of voter suppression remains an underlying concern among African-Americans. The lasting power of the 15th  Amendment, which awarded African-Americans the right to vote, resonates today in courtrooms across America, despite the implementation of the Voting Rights Act 55 years ago. Challenges to voting rights today—from photo ID requirements, to registration restrictions, early voting cutbacks, and the wholesale elimination of polling places—tend to echo those that have plagued the 15th Amendment for 150 years.

“Voter suppression is an important issue in this election,” Smart said. “We are looking at every instance of this type of discrimination and will work tirelessly to make sure that Black voters can cast their ballot without fear of suppression or, for that matter, any form of intimidation.”

Some say that the main flaw of the 15th Amendment was that it didn't guarantee citizens the right to vote—it only said that states couldn't bar voting on the basis of race or color. Beginning in 1900 (and continuing today) states found workarounds to the law. Years ago it was poll tax laws or literacy tests as means of restricting the Black vote. Today, many Black voting rights advocates may point to eliminating persons from the voting rolls (i.e. a felony conviction), or those who have moved between elections from one state to another and are officially “unregistered” in a particular locale. Since 2010, 24 states have put in place new voting restrictions, according to the Brennan Center for Justice at New York University Law School.

Here are a few issues identified by the Southern Poverty Law Center that sit before the next President of the United States that Black men should not ignore: