‘Sweet Lou’ Johnson passes away at 86 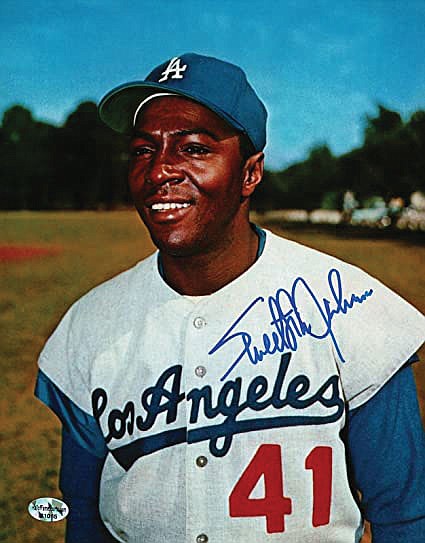 “Sweet Lou” Johnson, who hit a key home run for the victorious Los Angeles Dodgers in Game 7 of the 1965 World Series against Minnesota, passed away Oct.1 at the age of 86.

Johnson, who was born Louis Brown Johnson in Lexington, Ky. on Sept. 22, 1934, received the nickname “Sweet Lou” upon joining the Dodgers early in 1965 after outfielder Tommy Davis suffered an injury. Johnson received the nickname because of his infectious smile and because he was always clapping his hands.

“Lou Johnson was such a positive inspiration at Dodger Stadium with our employees and our fans as well as throughout the community in the appearances he made on behalf of the organization,” said Dodgers President & CEO Stan Kasten.  “Dodger fans will always remember his important home run in Game 7 of the 1965 World Series, when he was clapping his hands running around the bases.”

Between his time as a player and a front office employee in the community relations department, Johnson worked for the Dodgers for 40 seasons. He lived in Los Angeles and is survived by his wife Sarah and children Lauren, Carlton and Quinton.  Funeral services are pending.