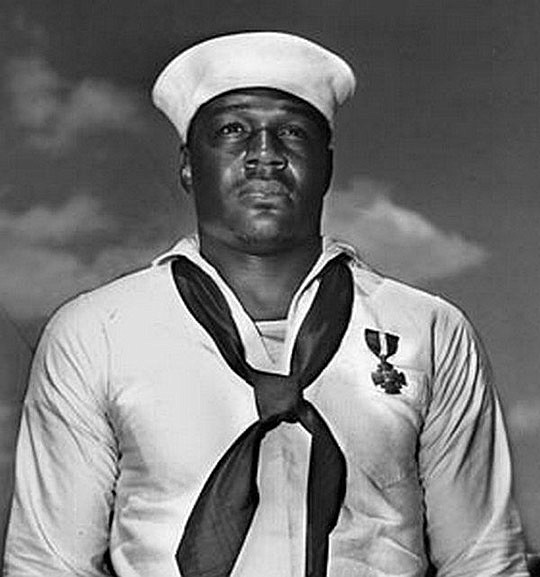 Military names can echo down through the ages, a fact underlined by the current fight in Washington, D.C., between President Trump and Congress, which has voted to strip the names of Confederate generals from several Southern Army bases.The president has vowed that won’t happen, but the battle might not be resolved before Election Day.

The Navy, meanwhile, has quietly charted a new course. A supercarrier now on the drawing boards will be christened the USS Doris Miller. It’s the first supercarrier to be named for an enlisted sailor and the first to be named after an African-American. Doris Miller, who went by “Dorie” in the Navy, was one of the first American heroes of World War II.

Most supercarriers are named for U.S. presidents — the USS John F. Kennedy. USS Ronald Reagan. USS Abraham Lincoln. Henry Kissinger called them “100,000 tons of diplomacy,” and that power has long been reflected in the Navy’s conventions for naming them.

During the 1941 attack on Pearl Harbor, as the USS West Virginia was sinking, Miller, who was the battleship’s boxing champion, helped move his dying captain to better cover, then jumped behind a machine gun and shot at Japanese planes until his ammunition was gone.

“One of the ways in which the Navy discriminated against African-Americans was that they limited them to certain types of jobs, or what we call ‘ratings’ in the Navy,” said Regina Akers, a historian with the Naval History and Heritage Command. “So, for African-Americans, many were messmen or stewards. Dorie Miller was a messman, which meant that he basically took care of an officer, laid out his clothes, shined his shoes and served meals.”

Akers said much of the attention has been on Miller firing the anti-aircraft gun, which he wasn’t trained to do. But Akers said what Miller did afterward is just as important: He began pulling injured sailors out of the burning, oil-covered water of the harbor, and was one of the last men to leave his ship as it sank. He continued getting sailors to safety afterward.

An official Navy commendation list of those whose actions during the attack stood out mentioned a Black sailor, but it didn’t bother to name Miller, a 22-year-old sharecropper’s son from Waco, Texas.

“It made two lines in the newspapers,” said Frank Bolden, who was a war correspondent for The Pittsburgh Courier, one of the leading Black newspapers of the day. He spoke in an interview with the Freedom Forum before his death in 2003.

“The Courier thought he should be recognized and honored. We sent not a reporter, we sent our executive editor to the naval department. They said we don’t know the name of the messman. There are so many of them.”

The paper though wasn’t about to give up, Bolden said. The Black press knew that by getting this unnamed sailor proper recognition, it could undermine a stereotype that African-Americans weren’t any good in combat.

“The publisher of the paper said, ‘Keep after it,’ “ Bolden said. “We spent $7,000 working to find out who Dorie Miller was. And we made Dorie Miller a hero.”

Miller was awarded a letter of commendation, but the Black press campaigned for a medal. And Adm. Chester Nimitz, commander of the U.S. Pacific Fleet, wanted to upgrade that commendation to the Navy Cross, then the third-highest honor for heroism.

Nimitz understood the value of a diverse force made up of sailors who felt they were being treated fairly.

“So in Nimitz’s mind the award would be good for the Navy and contradict the institutional racism that the Navy was known for,” Akers said.

President Franklin D. Roosevelt, eager to keep the nation united behind the war effort, agreed. Suddenly, Miller was in the spotlight.

“Miller, I mean, in just like the flip of a switch, becomes a celebrity,” Akers said. “He becomes one of the first heroes, period, of the war, but certainly one of the first African-American heroes of the war. He was on recruitment posters. His image was everywhere.”

After the war, in 1948, President Harry S. Truman ordered the military desegregated, a major milestone for the nation.

Akers said Miller was a good role model for sailors, a history lesson in trying to do the right thing.

“Despite the fact that he was denied certain basic constitutional rights because of the racism in our society at the time, Dorie didn’t let that deter him,” she said. “It didn’t lessen his patriotism, his love for country, his determination to serve and to give the Navy his very best, and that says a lot. That says a lot.”