Judicial ruling may restore faith in US Postal Service 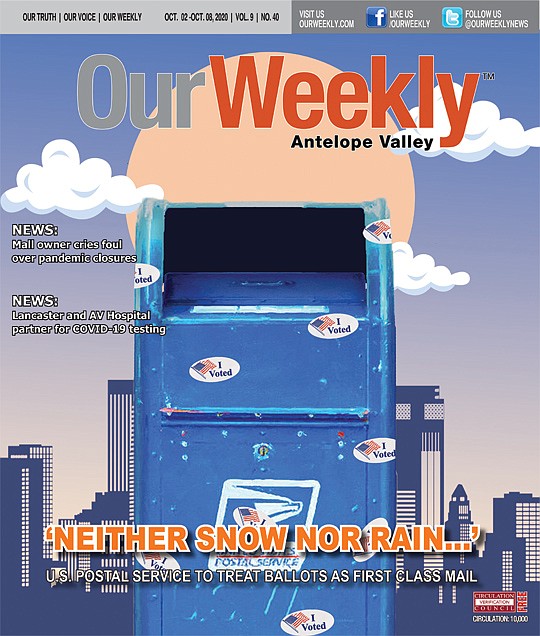 This year, due to the threat of the COVID-19 pandemic, every active registered voter in California will be sent a vote-by-mail ballot beginning Oct. 5th. Voters are encouraged to fill out the ballot and return it well before the Nov. 3 election day. Sounds simple enough—that is if voters trust the United States Postal Service (USPS).

On Sept. 21, U.S. District Judge Victor Marrero in Manhattan largely sided with those who claimed in a lawsuit that President Donald Trump, the Postal Service and the new postmaster general were endangering election mail.

"The right to vote is too vital a value in our democracy to be left in a state of suspense in the minds of voters weeks before a presidential election, raising doubts as to whether their votes will ultimately be counted," Marrero said.

According to the Associated Press, Marrero gave both sides until noon last Friday to settle the case in a manner consistent with his findings. If necessary, Marrero planned to impose an order that ensured postal workers could make late and extra delivery trips, as well as work overtime from Oct. 26 through Nov. 6.

As a result, USPS and attorneys representing New York City politicians and others in Jones v. USPS came to an agreement to implement the majority of the judge’s order, including reversing initiatives that have caused mail delays and prioritizing ballots for expedited delivery. They did not agree, however, on a portion of the judge’s ruling requiring the Postal Service to pre-approve overtime requests prior to the election.

The Postal Service and the Justice Department attorneys representing it in the case said they would file a request for the judge to modify his order on overtime. In the meantime, Marrero temporarily paused that section of his order.

The USPS is an independent federal agency under the authority of an appointed board of governors. In May, businessman and Republican Party fundraiser, Louis DeJoy, was appointed U.S. Postmaster General by the Board of Governors.

After his appointment, DeJoy implemented changes at the USPS without first seeking authority from the Postal Commission, and despite acknowledging that the service reductions would result in “mail left behind."

DeJoy later canceled some of the changes after a public outcry. The USPS, however, has already removed many sorting machines and mailboxes from service across several states.

The Washington Post reported allegations that DeJoy and his aides urged employees at New Breed Logistics, his former North Carolina-based company, to write checks and attend fundraisers on behalf of Republican candidates.

House of Representatives Democrats are opening an investigation of DeJoy and have called for his immediate suspension following accusations that he reimbursed employees for campaign contributions they made to Trump and other preferred GOP politicians, an arrangement that would be unlawful.

“There is an ongoing and concerted effort to disrupt the timeliness of mail delivery and to erode public confidence in the Postal Service, all leading, if successful, to the largest voter suppression in American history since Jim Crow.” Rep. Gerry Connolly (D-Va.) said during the debate that preceded the vote. “The effort is being directed by the new Postmaster General, Louis DeJoy, a crony and major donor of the President. A President who opposes mail-in voting for everyone apparently but himself and his wife.”

Connolly was one of the 222 co-sponsors of the House bill. Two of the co-sponsors were from the Republican party.

“On Aug. 18, the Postmaster General announced, finally, he put a hold on some of the sweeping operational changes that were not only misguided amid a pandemic, but actually eroded public confidence in America's favorite government agency, the Postal Service,” Connolly added. “All in a day's work for someone unqualified and unfit to begin with for the office he now occupies.

“The Postmaster's announcement didn't commit to reversing the cuts to service and capacity, especially restoring sorting machines that absolutely are critical tools in moving large volumes of mail, especially on the eve of a consequential national election,” Connolly said. “That is why this bill would restore the service delivery standards and operations in place before Mr. DeJoy took office.” Connolly said.

"Mr. Speaker, I rise today in support of the Delivering for America Act,” Maloney said. “I also rise in strong support of the brave postal workers across this nation who are continuing to deliver the mail for the American people in the middle of a global pandemic. The Postal Service is a critical component of America's infrastructure. It provides a lifeline of medication, supplies, and mail for all Americans, everywhere they live, especially in this time of need.

“Earlier this year, the Postal Service asked Congress to help. They asked us for $25 billion in critical assistance to help navigate through this crisis, just like all these other industries did, businesses and entities that received Federal funds from Congress.

“This was not a Democratic request. It came from the Postal Service, and it was supported unanimously by the Board of Governors, all of whom were appointed by President Trump.   In response to this urgent request, the House acted. The House said yes. We acted swiftly to help the Postal Service. We voted to include $25 billion in the HEROES Act, and we passed it on May 15.

“Unfortunately, the President would not agree, and the request has languished for more than three months. And now we know why, because the President told us why. He admitted on national television that he was blocking the $25 billion in order to hobble mail-in voting. That is what he said, and I would like to read it to you:   “They want $25 billion for the post office. Now they need that money in order to make the post office work, so it can take all of these millions and millions of ballots.''

“Regrettably, it does not end there. Now the new Postmaster General is using this lack of funding to justify sweeping and damaging changes to Postal Service operations, and we have seen the results: national headlines about delays of days and weeks in mail, veterans desperately waiting for their medications, sorting machines being ripped out and put in dumpsters.

“The bill we are considering today is simple. It does two things. First, it provides the $25 billion the Postal Service requested on a bipartisan basis to help during the coronavirus crisis. Second, it returns delivery standards to the way they were before the Postmaster General recently caused all those delays, which has an impact on the delivery and the ability of Americans to vote by mail.”

The Act is due to be considered by the Senate. A bill must be passed by both the House and Senate in identical form and then be signed by the President to become law.

Fighting to uphold the Constitutional right to vote, the Los Angeles County Board of Supervisors on Sept. 1, ratified an executive order opposing the Trump Administration’s cost-cutting efforts at the USPS, calling it a brazen attack on Americans’ ability to vote by mail.

Acting on a motion by Supervisor Mark Ridley-Thomas, Board Chair Pro Tem Hilda Solis issued the executive order in August. The order authorized County Counsel to join litigation as amicus curiae (friend-of-the-court) to oppose the changes at the USPS.

“We’ve fought too hard to have our voices heard on Election Day, and we cannot allow the Postmaster General to suppress our right to vote by mail and undermine a pillar of our democracy,” Ridley-Thomas said. “It is imperative that we take a stand so voters can cast their ballots without having to go to a polling station during a pandemic.”

“My father was a letter carrier for more than 30 years here in Los Angeles. The United States Postal Service is not only vital to our election, but also to the livelihood of so many in our communities,” said Bass. “The Post Office is one of the largest employers of veterans. We must continue to do all that we can to protect this institution from those who are looking to destroy it.”

Bass is among the leading Congressional Representatives calling for DeJoy’s resignation, and for the Administration to cease any "operational initiatives" that will have an impact on election mail.

The USPS has become even more critical amid the COVID-19 pandemic. Many people will rely on mail to receive lifesaving medications and other supplies.

“Trump’s cynical shenanigans with the Post Office could have very real impacts come crunch time,” an email from the Community Coalition states. “Thankfully, California has a rule that if your ballot is postmarked by Election Day and received within 17 days, the departments will process, verify, and count that ballot.”

Those not comfortable mailing in their ballot can make sure their vote is counted by dropping it off in-person at any Vote Center in LA County or Vote-By-Mail Dropbox location.