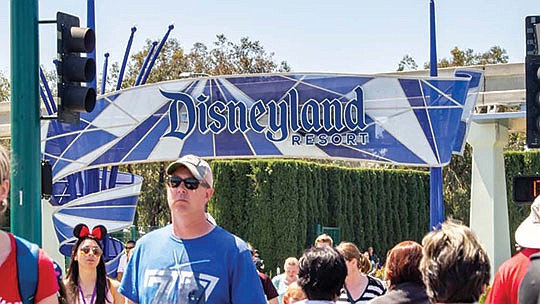 Disney is laying off 28,000 workers at its Disneyland and Disney World theme parks due to continued struggles caused by the coronavirus pandemic, the company announced this week.

The company did not say how many of the affected employees worked at the Anaheim theme park and how many worked at Disney World in Florida. The nation's theme parks, including Magic Mountain, Knott's Berry Farm and SeaWorld in Southern California, are experiencing significant financial difficulties.

Disneyland remains closed per state COVID-19 guidelines, but Disney and Orange County officials have lobbied hard in recent weeks in an attempt to convince Gov. Gavin Newsom to allow the park to reopen. Disney World, which comprises four separate Disney theme parks near Orlando including Magic Kingdom, reopened this summer with restrictions amid the pandemic, but attendance has been down sharply.

“In light of the prolonged impact of COVID-19 on our business, including limited capacity due to physical distancing requirements and the continued uncertainty regarding the duration of the pandemic—exacerbated in California by the state's unwillingness to lift restrictions that would allow Disneyland to reopen—we have made the very difficult decision to begin the process of reducing our workforce at our Parks, Experiences and Products segment at all levels, having kept non-working cast members on furlough since April, while paying healthcare benefits,'' Disney Chairman Josh D'Amaro said.

“Approximately 28,000 domestic employees will be affected, of which about 67 percent  are part-time. We are talking with impacted employees as well as to the unions on next steps for union-represented cast members,'' he continued.

“Over the past several months, we've been forced to make a number of necessary adjustments to our business, and as difficult as this decision is today, we believe that the steps we are taking will enable us to emerge a more effective and efficient operation when we return to normal. Our cast members have always been key to our success, playing a valued and important role in delivering a world-class experience, and we look forward to providing opportunities where we can for them to return.''

The company's Parks, Experiences and Products segment saw an 85-percent revenue drop from the third quarter of last year.

The company had originally planned to reopen its Disneyland and California Adventure theme parks in Anaheim on July 17, but those plans were scrapped as the state saw a surge of coronavirus cases. That surge prompted a delay in the state's release of operating protocols for large venues such as theme parks.

The Downtown Disney shopping and entertainment district reopened to the public on July 9, although some individual businesses remained closed.