Despite uptick in virus transmission rate 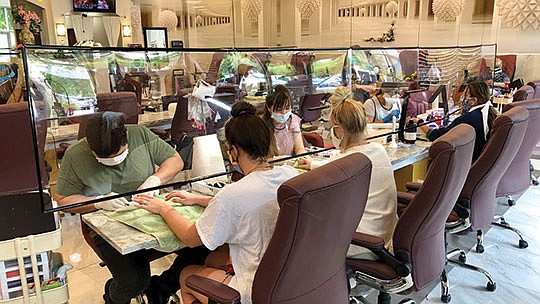 Despite reporting another uptick in daily coronavirus cases and an upward trend in the community transmission rate of the virus, Los Angeles County officials this week cleared the way for nail salons to resume indoor operations and for indoor shopping malls to reopen.

The salons and malls will be both be restricted to 25 percent of capacity, and public health director Barbara Ferrer encouraged nail salon operators to continue offering services outdoors. She said food courts at indoor shopping malls will also remain closed. The exact dates when the facilities will be  allowed to reopen was not immediately determined, but Ferrer said it would be in the next 10 days.

Outdoor playgrounds, which have been off limits during the pandemic, can also reopen, Ferrer said, but only at the discretion of individual cities in which they are located. Anyone over age 2 will be required to wear a face covering at the playgrounds, and no eating or drinking will be permitted.

The reopenings were announced one day after the county Board of Supervisors agreed to open a waiver process for schools to offer in-person instruction for students in pre-Kindergarten through second grade, and voted to reopen craft breweries, wineries and outdoor card rooms.

Timelines for those business reopenings have not yet been announced, but they are also expected to occur over the next 10 days, Ferrer said.

The openings come despite what Ferrer described as a “small increase'' in daily coronavirus case numbers when compared to the early part of September. She said the increase “may either reflect lower testing numbers at the beginning of the month, or they may reflect the fact that we're starting to see some small increases in community transmission.''

She noted that testing dipped earlier in the month when the region was hit with a severe heat wave that forced the closure of some testing centers. Fires that fouled the air with smoke also forced some centers to temporarily close.

The county's recent positivity rate of people who are tested for the virus has been steadily dropping, now averaging 2.8 percent. Hospitalizations have also been falling steadily, dropping from about 2,200 a day in July to roughly 740 as of last week.