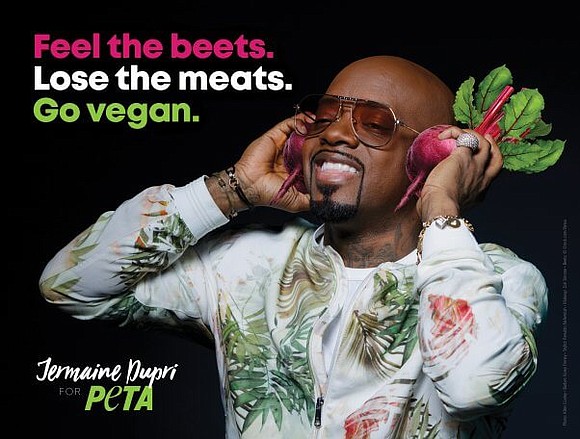 It might come as a surprise to many people around the world -- especially Americans -- that November is World Vegan Month, and Nov. 1 was International Vegan Day. The Thanksgiving turkeys, on the other hand, are probably the happiest to hear the news.

Rapper and music producer Jermaine Dupri is asking friends and fans to give thanks to Mother Nature and take on the challenge of living a different, plant-based diet. He is challenging one million people to become vegan any day in November for 24 hours. Dupri is leading the challenge with “The Beet,” a website focused on plant-based lifestyles. Together they’ve launched the hashtag, #PlantBasedForADay.

According to “The Beet,” the one-day challenge of a plant-based diet can save one animal’s life, so they teamed up with the Grammy Award-winning Dupri to make a difference in society and bring change to many people’s lives.

Dupri’s hopes his role as creative advisor and contributing editor will help convince his fans and others to consider a plant-based diet or at least incorporate more plant-based foods and fewer animal products in meals.

“When I went vegan nearly 15 years ago, there were no Beyond Meats or Impossible Foods, and it was a commitment. The struggle was real and you had to be committed to find vegan food to eat,” Dupri said. “Now people know that they should eat vegan or plant-based for their health. The reason I chose to do this collaboration with The Beet is to help people who want to eat plant-based, but are not as far along as I am and have access to plenty of information.”

A few key points for the challenge:

Meals must be completely free of animal products such as dairy, eggs, fish, poultry, and meat. Meals should focus on including; legumes, vegetables, fruits, whole grains, seeds and nuts.

Make sure to post plant-based meals on social media with the #PlantBasedForADay and ask someone else to do the challenge with you for 24 hours.

The challenge focuses on saving animals, the planet, as well as experiencing the benefits of a healthier lifestyle. The ultimate goal of the Vegan Month challenge is to convince more than one million people to adopt a plant-based diet permanently, but even one single person can have a huge impact on the environment.

“With the rise of COVID-19, there has been a spike in interest in immune-supporting health practices,” said Steven Price, CEO of 25madison, a collaborator with “The Beet.”

“People are searching for ways to make their everyday lives healthier, and many realize that adding more plants to their diet is a great place to start. ‘The Beet’ is here to support that journey for anyone who wants to take it and we’ll meet you wherever you want to start,” Price said.

According to the Vegan Society, by 2040 only 40 percent of the world’s entire population will be eating meat, 35 percent will eat lab-created “clean” meat, and the remaining 25 percent faux meats, known as meat replacements.

Since the pandemic, more people decided to try a plant-based diet because meat prices skyrocketed, and dairy wasn’t much in demand.

“We knew the Society had been founded in November 1944 but didn’t know the exact date, so I decided to go for 1 November, partly because I liked the idea of this date coinciding with Samhain/Halloween and the Day of the Dead – traditional times for feasting and celebration, both apt and auspicious,” Wallis stated in 2011.

Aside from advocating for animal welfare, Dupri will also help “The Beet” grow, by creating daily content focusing on topics such as “how to live a vegan lifestyle” and “eat more plant-based meals.”

“Jermaine Dupri is such a thought leader in the vegan world, and of course the music world,” Beet Editorial Director Lucy Danziger said. “We have been in discussions with him to work with ‘The Beet’ since our launch, and it’s such an honor to collaborate with Jermaine to promote how to live a healthy plant-based lifestyle. Jermaine Dupri’s mission to create equitable access to vegan food for all communities is more important today than ever.”

Danziger, who is the former president of the American Society of Magazine Editors and “New York Times” bestseller, has been living on a plant-based diet for 18 months now and loves it.

“I am doing it for my health, the planet, and animals. I started for health reasons but when you learn more, you get motivated for every reason,” Danziger said. “I think it's a great way to show people how easy and delicious it is to eat a plant-based diet and once they try it, they feel so much better after they eat that they realize they don't need animal products to get their protein and feel energized, so I think this campaign will raise awareness and help more people eat more plant-based as part of their healthy-living and planet-friendly approach to food.”

Danziger chose to work together with “The Beet” because she enjoys having an impact on society and the environment.

“I love helping people be their healthiest and happiest versions of themselves and it was clear to me that the next big wave of well-being was coming from this direction, and that the sooner we shifted from the traditional American diet, which is heavy in fat, sugar and processed food and started eating a more plant-based diet, the better it would be for our health, the planet and animals,” Danziger said. “So I was motivated to provide a resource for people who want to make that shift and give them recipes, expert advice, easy tips -- everything they need to be their healthiest selves and do that through eating a more plant-based diet.”