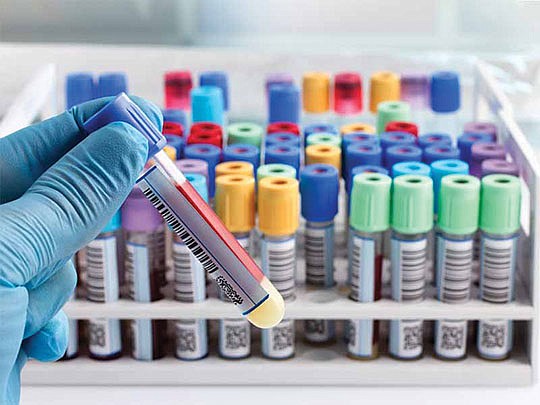 A recently opened state COVID-19 testing lab in Valencia has produced an unexpectedly high number of inconclusive test results, the state’s top health officer confirmed this week. He later said problems that caused the issue have been identified and addressed.

Gov. Gavin Newsom celebrated the opening of the PerkinElmer lab on Oct. 30, hailing it as a dramatic advancement in the state’s coronavirus-testing system, with an ultimate capacity of processing 150,000 tests per day by next March.

Dr. Mark Ghaly, the state’s Health and Human Services secretary, told reporters Tuesday that in the lab’s first week of operations, it produced “a higher number than expected” of inconclusive test results.

“We have been working closely with the PerkinElmer team, with our lab directors, with the staff to ensure we have identified the reason for that and corrected it. We believe that we have,” Ghaly said. “Not only time will tell, but we’re continuing to watch those results.”

Ghaly said part of the issue was that a chemical reaction necessary to properly run the tests didn’t occur in some of the inconclusive cases. He said health officials have identified some of the issues that caused the reaction to fail, and the problem has been corrected.

“So we feel we’re on the road to having fewer inconclusive tests so that the lab can do what it was meant to do, which is provide timely information about someone’s COVID status, to equip public health departments and other entities to track the transmission of disease,” he said.

The $25 million lab is also expected to dramatically lower the cost of coronavirus testing. Newsom said last month the state has been paying an average of $150 per COVID-19 test—a major expense considering the more than 18 million tests that had been conducted as of late October. The new lab is expected to lower that cost to $30.78 per test.

Ghaly urged anyone who has received an inconclusive test result—either from the Valencia lab or any other facility to get tested again.