One view of Vietnam 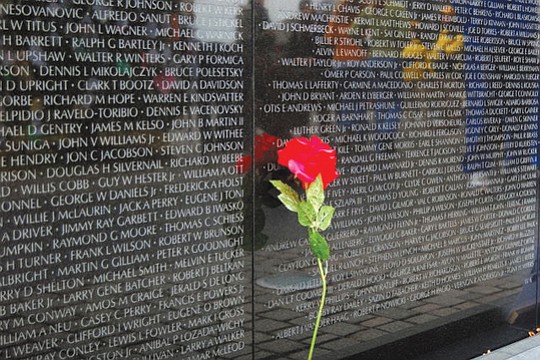 On Sept. 15, 1968, as Private Ronald Washington, I touched down in Biên Hòa Air Base just north of Saigon, at the height of the Vietnam War. Earlier that year the North Vietnamese mounted the Tet Offensive (Jan. 31-Sept. 23), a major uprising that would force the top brass among American politics and military to reassess the conduct of the war.

As I waited to be sent to a permanent duty assignment, I preoccupied myself getting acquainted with the country. Outside many of the American outposts throughout Vietnam were villages (or 'villes') catering to G.I. recreational pursuits. Across the Saigon River near the airport, Soul Alley was devoted exclusively to the tastes of the Black servicemen brought in to promote the war in Southeast Asia. An area about the size of Leimert Park, in Soul Alley the brothers could get soul food, tailors could run up 'Super Fly' inspired outfits, and clubs would feature Rhythm and Blues. It was also an open area market of illicit activity.

Cultivating just a few words of the native language could enable a serviceman to supplement his government wages nicely in the black market.

Initially, I hooked up with with a lovely country girl from the Mekong Delta named ‘Marie’ and we operated out of a nice apartment on the edge of Soul Alley, but eventually I moved out of the area. In such a popular place I ran into various acquaintances from good ole Dorsey High, thousands of miles on the other side of the Pacific. Determined to keep a low profile, we moved further away, and business continued without a hitch, which was fine by me (oddly enough, for all my labor, I didn't leave Vietnam with much money, as I was supporting a household full of Marie's relatives from the Delta. Love is not cheap, regardless of language or geography.)

On the surface, the war was about preventing the communist takeover; in reality it was about commerce. A lot of money was made in that war and we (rank and file G. I.s) got very little of it. General Duong Van Minh, popularly known as ‘Big Minh,’ fighter pilot and air force commander Nguyen Cao Ky, and former general and South Vietnamese President Nguyen Van Thieu were at the top of the heap (all of them escaped the communist take over and went into exile when the country collapsed), overseeing warehouses of heavy equipment and anything you could think of.

The French were in Vietnam before the Americans (partially due to favorable conditions for growing rubber trees), and the French influence was everywhere. Eventually I was posted with the 45th Military Intelligence Company, under the 519 Military Intelligence Battalion, which was housed in a French château. Throughout the country French architecture peppered the landscape. Perhaps 40 miles north of Saigon, near the Cambodian border was the Michelin Rubber Plantation. American units, especially the 25th Infantry Division (Tropical Lightning) were tasked to provide security for this important source of revenue for the South Vietnamese. In addition, it was a favored staging area for the Viet Cong and North Vietnamese as they raided the south.

In the underground economy, the Vietnamese were fond of any brand of cognac, perhaps because of the French colonial history. Eventually, I was set up to do the job I was trained for. Unlike the ‘bush babies’ or ‘grunts’ in the jungles chasing ‘Charlie’ in a deadly game of hide and seek, I was tasked with shifting through mounds of reports and attempting to finger out the enemy's next move.

Occasionally I would sit in on meetings with a few officers and enlisted men who would later report to the generals. Among the problems facing us were the tax collectors within individual provinces. They were the ‘oil’ that kept the Viet Cong operation going.

A typical scenario might be presented thusly: ‘We need 50 people to dig graves,’ or ‘we need so much rice’ or whatever was needed to further the war effort. The top ‘brass’ in tune were endeavoring to kill (or 'eliminate') these tax collectors to hinder the enemy's ability to do battle. These measures were labeled the ‘Phoenix Program,’ and remain among the most controversial and debated aspects of the war.

I did not endear myself to my superiors by making comments, asking questions, and so forth, no-nos for enlisted men in this environment.

Meanwhile, I concentrated on my off duty activities. Things got so good (financially) I applied for an extension (most people wanted to get out, but I wanted to make bank). When that fell through, I went AWOL on Sept. 7 1969. By October I'd gotten busted by the MPs as I tried to buy money orders. I was placed in a holding tank for a few days before being sent back to the states.

By this time I'd done an about face and wanted to get out. Fortune smiled in the form of a benevolent clerk, a White boy I'd befriended during my wayward tour of duty. Upon arriving in the (now decommissioned) Oakland Air Base, I followed the clerk's instructions to the letter, and claimed I'd lost my orders, gave the personnel a bogus end of service date, and exited Uncle Sam's Army with an honorable discharge.