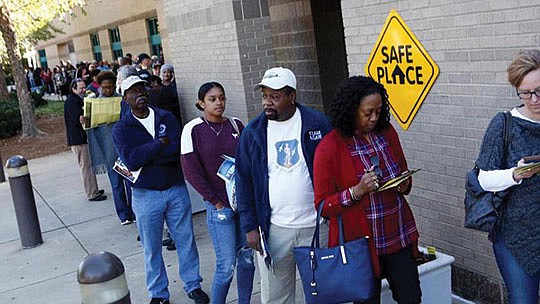 While minority voting blocs combined to deliver the presidency to Biden, African-American voters continue to be the Democratic Party’s most loyal voting constituency in presidential elections.

In an election eve poll of the African-American vote designed and executed by the African-American Research Collaborative under the guidance of CEO Henry Fernandez, Black voters — women at 92 percent and men at 86 percent — signaled support for former Vice President Joe Biden.

President Trump’s perceived mishandling of the coronavirus pandemic emerged as the leading motivating issue among African-Americans to vote Democratic, according to Fernandez who spoke at a news briefing about the election eve results organized by America’s Voice. That was true for African-American men and women in almost equal numbers.

The secondary motivation was their perception of Trump’s disrespect of their community and his enabling of an increase in overt racism in America. The third largest driver of their pro-Democratic votes was concern about the economy overall, with wider variations among African-American voters by age.

Overall, 84 percent of all Black voters, men and women, agreed with the statement “President Trump ignored the early warning signs of the coronavirus and because of his mismanagement, millions of Americans became sick and more than 220,000 died.”

While the fact that African-Americans have been disproportionately affected by the coronavirus is now well documented, the poll revealed that the searing reality of personal loss and the magnitude of collective community and country losses were paramount in the minds of participants committed to voting in the 2020 election.

Derrick Johnson, president of the NAACP which was a sponsor of the poll, was asked how he interpreted the doubling, from 4 percent to 8 percent, of support for President Trump among African-American women voters from the 2016 election and from 13 percent to 17 percent for African-American men. Johnson responded that the Black vote was not monolithic, nor should it be expected to be so. He said the 86 percent rate for Black male democrats is a clear testament to party loyalty and, importantly, the numbers and polling show that “White supremacy behavior will not be tolerated” by this constituency.

Like Johnson, Fernandez stressed that Black men, at 86 percent, constitute a core constituency for Democrats. White women, as exit polls are showing, voted for President Trump in larger numbers in 2020 than in the 2016 election. As one panelist bluntly put it, “White women are not a Democratic constituency group.”

Predictions that President Trump’s signing of criminal justice reform legislation, the First Step Act, would fuel a significant shift of Black male voters to the Republican Party was refuted by the poll, Fernandez noted.

The poll showed that African-Americans, and the other ethnic groups surveyed as well, have great concerns about current criminal justice policies, community policing and their intersection with racism. These Americans support reform through multi-faceted approaches, including reducing mass incarceration, providing educational opportunities for the incarcerated, and more job training and better access to mental health services for their communities.

However, as Johnson pointed out, when speaking of African-Americans, it is a myopic and misinformed view of history to focus on criminal justice as though “it was the sum total of our existence in this country.”

Beyond the three leading motivators, the poll also showed that African Americans, like the other groups surveyed, highly disapproved of President Trump’s anti-immigrant policies and initiatives, particularly the separation of children from parents. At 81 percent, African-Americans supported devising “a path to citizenship for undocumented immigrants who live and work here,” as well as devising a process to accommodate legal entry into the United States.