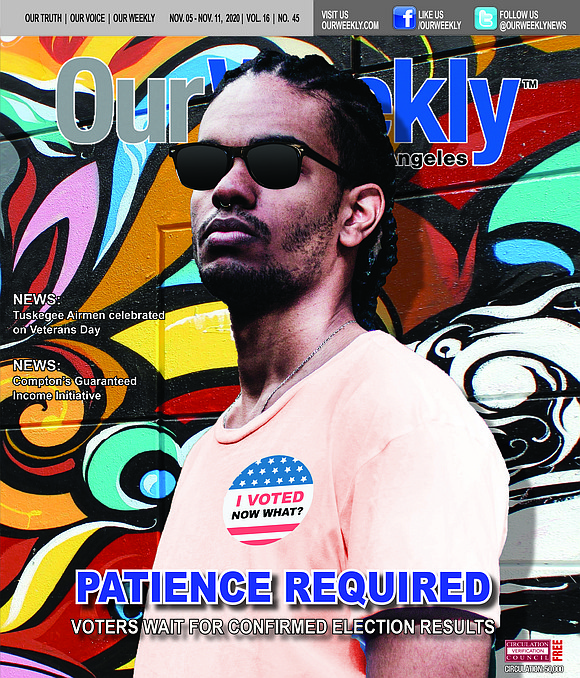 The rise of mail-in ballots during early voting is largely credited for polling places being relatively empty across LA County on Nov. 3. However, just because election day is over, does not mean the final tally has been counted or certified. Across the nation, many ballots were mailed in, meaning the ultimate count for the 2020 presidential election between Democrat Joe Biden and Republican President Donald Trump could be days, even weeks away, experts warned.

At press time, Biden held a lead of 264 to 214 in Electoral College votes.

Locally, according to the Los Angeles County Registrar-Recorder/County Clerk’s Office, about 3.2 million ballots have been cast this election season. More than 2.3 million of those votes were returned by mail and of those, more than half were returned via official drop boxes.

“On election night, we will have a good picture of most contests, but the outcomes of close contests may take days or weeks to settle,” said California Secretary of State Alex Padilla. “This is normal.”

California officials have 30 days after the election to tally all ballots and certify the results.

Meanwhile, new rules this year in California will allow any mail-in ballot that was postmarked by Tuesday, Nov. 3 and will be received as late as Nov. 20 to be counted. Voters can track their mail-in ballot at www.lavote.net. If the status says “not yet received”, then that mail-in ballot is still being processed.

Stanford Law Professor Nathaniel Persily said 2020 is unprecedented because of the COVID-19 pandemic, which heightened the avoidance of in-person polls in favor of voting by mail. He is preaching patience and estimates between 70 million to 80 million votes will be cast by mail across the nation this election season.

Between in-person early voting and voting by mail, a record breaking 100 million people voted early before election day across the country.

On Monday, the LA County Registrar reported nearly 3.2 million ballots had already been cast, which equated to a 55.6 percent voter turnout before election day. Those numbers were on par with Persily’s expectations that “easily 60 percent” and possibly as many as 75 percent of votes in the 2020 election would be cast before Election Day.

Persily said there are always problems on Election Day in a vast country like the United States of America. Some polling locations saw long lines. Others experienced machine breakdowns; a shortage of poll workers due to the impacts of COVID-19; impatient voters; and intimidation tactics.

Persily said the key to navigating this election cycle “is to not focus on isolated instances but to look for systemic issues.”

The Department of Justice’s Civil Rights Division sent personnel to Los Angeles and Orange counties to monitor compliance with federal voting rights laws on Election Day. Since the passage of the Voting Rights Act in 1965, the division has regularly monitored a variety of elections around the country throughout each year to protect the rights of all voters in local and national elections.

“Our federal laws protect the right of all American citizens to vote without suffering discrimination, intimidation, and harrassment. The work of the Civil Rights Division around each federal general election is a continuation of its historical mission to ensure that all of our citizens can freely exercise this most fundamental American right,” said Eric S. Dreiband, assistant attorney general for the division. The department historically has monitored jurisdictions in the field on election day.

Meanwhile, while awaiting national results, it is important to remember that every state has its own way of counting votes. Some states counted early-arriving mail-in ballots as they arrived, while others waited until Election Day itself to begin tallying votes.

Battleground states like Arizona and Florida began counting mail-in ballots during early voting periods. However, in other swing states like Wisconsin, Pennsylvania and Michigan, mail-in ballots were not counted as they were received, which means those states may take days to fully report.

Persily warned that exit polls on election night are notoriously inaccurate and said the best thing voters can do is stand by.