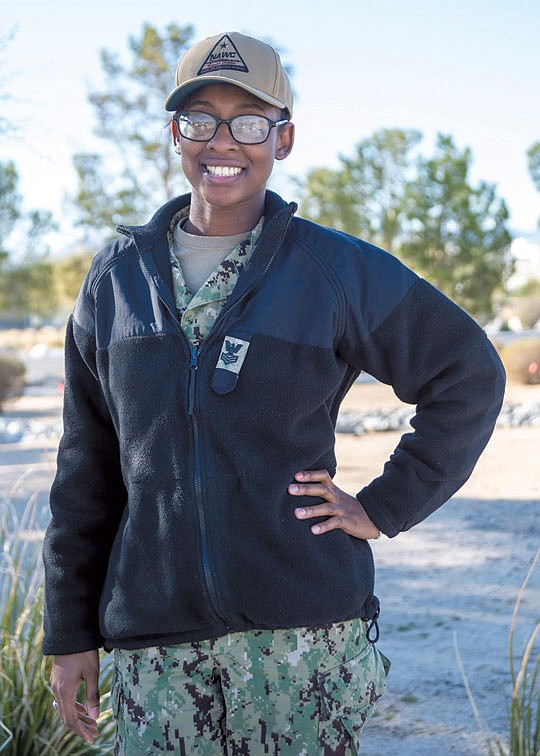 As a Navy career counselor, Davis is responsible for the career development for sailors in the China Lake area.

“Just helping people in general has always been something I enjoy," Davis said. "In this role it is easy to help several people at the same time.”

Davis is a 2009 Hope High School graduate. According to Davis, the values required to succeed in the Navy are similar to those found in Los Angeles.

“I learned to be open to change," said Davis. "Change is constant and you have to be able to adapt.”

NAWS China Lake is located in the Western Mojave Desert region of California, approximately 150 miles north of Los Angeles. The installation is the Navy’s largest single piece of real estate, representing 85 percent of the Navy’s land for Research, Development, Acquisition, Test and Evaluation (RDAT&E) use and 38 percent of the Navy’s land holdings worldwide. In total, its two ranges and main site cover more than 1.1 million acres, an area larger than the state of Rhode Island.

The workforce at China Lake is a combination of military, civilians and contractors employed across many different commands focused on researching and evaluating cutting edge technological systems, and training of Navy personnel preparing for combat in areas around the world. China Lake and the men and women who serve there play a key role in the Navy’s broader mission of protecting American interests on the world’s oceans.

Though there are many ways for sailors to earn distinction in a command, community and career, Davis is most proud of her very first retention excellence award in 2017.

“I had to rebuild the career development program from scratch,” Davis said. “We were getting ready for deployment at the same time, so this was validation that I was doing a good job.”

As a member of the U.S. Navy, Davis, as well as other sailors, know they are a part of a service tradition providing unforgettable experiences through leadership development, world affairs and humanitarian assistance. Their efforts will have a lasting effect around the globe and for generations of sailors who will follow.

“Serving in the Navy means contributing to something that is bigger than myself,” Davis said.