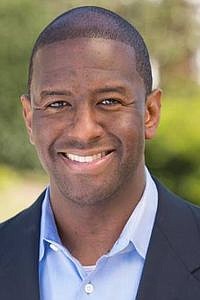 The Democrat’s decision comes days after he was found by police officers “inebriated” in a South Beach hotel room, alongside another man who may have overdosed on crystal methamphetamine.

“After conversation with my family and deep reflection, I have made the decision to seek help, guidance and enter a rehabilitation facility at this time,” Gillum said in a statement released Sunday evening.

Following the incident, the father of three admitted that he had had too much to drink and denied any allegations that he had used drugs. In his latest statement, Gillum acknowledged the impact excessive drinking can have.

“I witnessed my father suffer from alcoholism and I know the damaging effects it can have when untreated. I also know that alcoholism is often a symptom of deeper struggles,” he said. “I am committed to doing the personal work to heal fully and show up in the world as a more complete person.”

Gillum reissued an apology to his family, friends and the people of Florida who he said have “supported me and put their faith in me over the years. I now need to firmly focus on myself and my family. I will be stepping down from all public facing roles for the foreseeable future” Police officers were called to the Mondrian Hotel South Beach early March 13, where the Miami Beach Fire Rescue were treating a 30-year-old man for a cardiac arrest. Fire officials advised the officers that the man may have had a drug overdose and he was taken to Mount Sinai Medical Center where nurses reported he is in a stable condition.

Gillum, who was also in the hotel room with another man, Aldo Mejias, was unable to talk to officers due to his “inebriated” state, police said. Meijas, who called the emergency services, allegedly found Gillum in the bathroom of the hotel room vomiting. Responding officers found three small, clear bags suspected of containing crystal methamphetamine in the hotel room.

Gillum was not taken into custody and went home “without incident.”