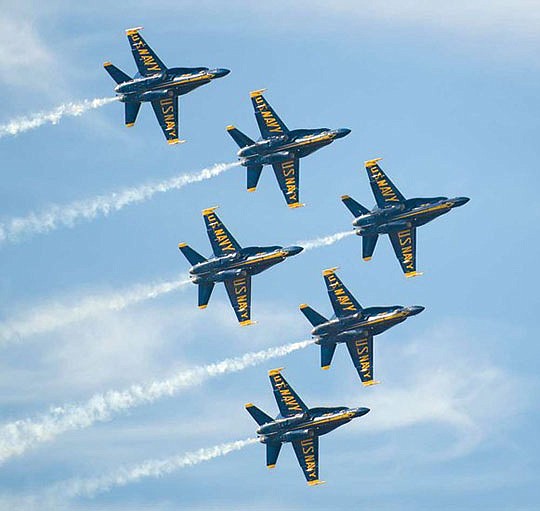 The famous Blue Angels, along with U.S. Navy’s newest fighter, an Army parachute team, an aerobatic pilot, and a vintage World War II pilot training aircraft will all be on display this month at the Los Angeles County Air Show coming March 21-22 at William Fox Field in Lancaster.

“This year’s goal is to knock the socks off the aviation enthusiast, and that’s not an easy task here in 'Aerospace Valley,'” said Mike Van Kirk, board president of the air show. “For those of us who live here, we’re blessed to see some of the world’s top aircraft fly on a regular basis, but I’m thrilled to say the 2020 show is shaping up to be one of the most exciting air shows in the country.”

In addition to the Blue Angels, the Navy’s F-35C demonstration team from Naval Air Station Lemoore, Calif., will showcase the service’s latest fighter. The F-35C is the Navy variant of the joint strike fighter, which also has versions for the Air Force and Marine Corps, as well as several international partners.

This is the first year the Navy has fielded a F-35C team for air shows.

The U.S. Army’s Golden Knights Parachute Team will make its debut at the air show. It is comprised of demonstration and competition parachutists drawn from all parts of the U.S. Army.

Aerobatic pilot Chuck Coleman returns this year. Coleman, a local pilot, has performed nationwide and served as a special consultant for the upcoming “Top Gun” sequel. Coleman served as the aerobatic flight instructor for the “Tom Cruise School of Flying” in his Extra 300L airplane and performed in more than 140 flights with the actors.

Visitors can learn about War Eagle Field, the World War II flying school for Royal Air Force pilots in Lancaster. The display is made possible by a joint effort with the Antelope Valley Rural Museum. As well, the Heroes and Legends history panels will feature discussions on subjects as varied as the U-2 spy plane, women in aviation and War Eagle Field.