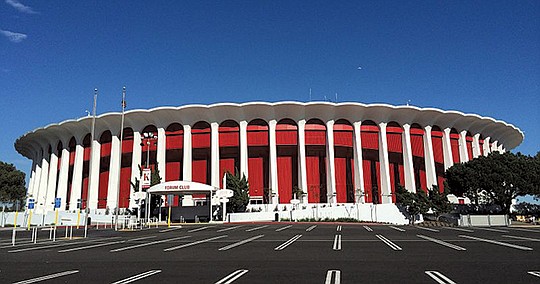 The Clippers would neither confirm nor deny the ESPN.com report, but issued a statement, saying, “The Clippers continue to pursue plans to build a state-of-the-art, 18,000-seat basketball arena and entertainment complex in Inglewood and are currently working with the city to successfully complete the comprehensive Environmental Impact Report.’’

The Forum is owned by the Madison Square Garden (MSG) Company. Regarding a new arena, the Clippers said they were “examining every possible way to resolve our differences.’’

MSG, which also owns the New York Knicks, has been locked in a legal battle for nearly two years with the city of Inglewood and Ballmer—the league’s wealthiest owner—over his parcel, a mile from The Forum.

MSG alleges that the city violated an agreement not to promote competition to The Forum by working with the Clippers to develop an arena nearby and that the city lied by convincing the company to cede land for a technology park that was later sold to Ballmer in what MSG characterized as a back-room deal.

According to the report, there are currently three lawsuits active, including one from IRATE (Inglewood Residents Against Takings and Evictions), an organization funded partly by MSG. The Environmental Impact Report for the project was submitted by Inglewood to the court on Dec. 27, with a 30-day window for community groups and interested parties to respond with concerns, and was extended another 30 days on Feb. 10.

In recent days, the two sides began engaging in substantive discussions to resolve the stalemate, which has reportedly cost tens of millions of dollars collectively in legal fees. Sources told ESPN that an agreement is imminent.