Suspicion surrounds deaths of minority men in the Southland

Local events are just the latest in a uniquely American practice 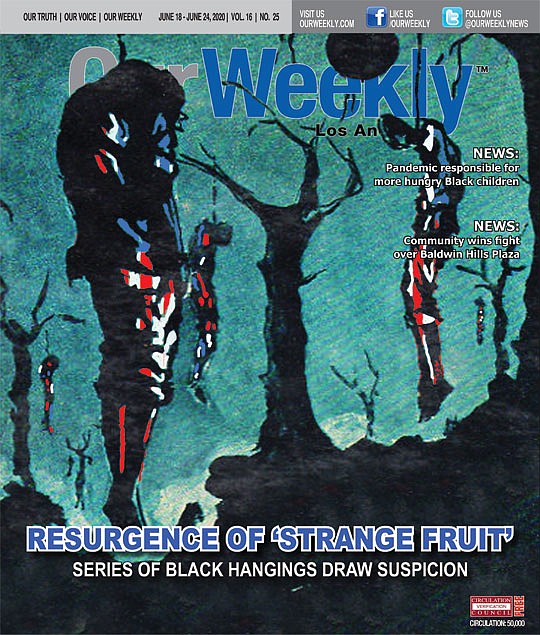 These traditions continued with westward expansion, to facilitate the submission of Mexicans (perhaps 5,000 vanishing between 1910 and 1920) in the southwest, and Asians inducted into the railroad industry along the west coast.

In the aftermath of the Civil War and the start of what became known as “Reconstruction,” lynching increased as a technique in which to keep the newly emancipated “in their place.” The main practitioners of this method of repression were the Klu Klux Klan, a group launched by Confederate Gen. Nathan Bedford Forrest. A brilliant military strategist and an early proponent of “guerilla warfare,” Forrest used his military acumen to shape the Klan into the premier White terrorist contingent, and served as its first “Grand Wizard.”

At the turn of the 21st century, a gay man, one James Allen (a member of a marginalized group with its own heritage of persecution) compiled an archive of nearly 100 photographs chronicling this American past time. These resources were readily abundant, as amateur and professional photographers alike regularly documented these events, to be sold as postcards and souvenirs.

This pictorial collection, titled “Without Sanctuary: Lynching Photography in America,” was published in 2000 (now out of print). It remains relevant today as it inspired a bill introduced in January of 2019 by former Black Panther and now Congressman Bobby Rush (D-IL). That legislation is still languishing among our nation’s lawmakers in Washington, DC.

Today, as demonstrations and protests rage worldwide under the mantel of “Black Lives Matter” another battle rages to make this insidious staple of American history a relic of the past. Spearheaded by Senators Cory Booker (D-NJ), Kamala Harris (D-CA), and Tim Scott (R-SC), H.R. 35 will make lynching a federal crime (punishable by up to life imprisonment). It has been dubbed the Emmett Till Anti-lynching Act, in memory of the 14-year-old who was beaten and murdered in 1955 after he allegedly “wolf whistled” at a White woman.

The killing shocked the nation and is regarded as a catalyst for the Civil Rights Movement. (Till’s accuser, one Carolyn Bryant Donham, recanted in 2017, and admitted to White Duke University professor Timothy B. Tyson that her allegations were false).

The primary opposition to the bill comes from Sen. Rand Paul (R-KY), who criticizes the manner in which the bill was written. He reasons that its interpretation could deem simple assaults as lynching, and should be more specific in its definition.

The study of history is a necessary practice in order to understand current events, and anticipate the future. That said, today’s headlines assure us that the practice of lynching has no immediate resolution in the foreseeable future.

The jury is still out.