‘Lions and tigers and bears’ (and more!)

How a childhood obsession became a full time profession 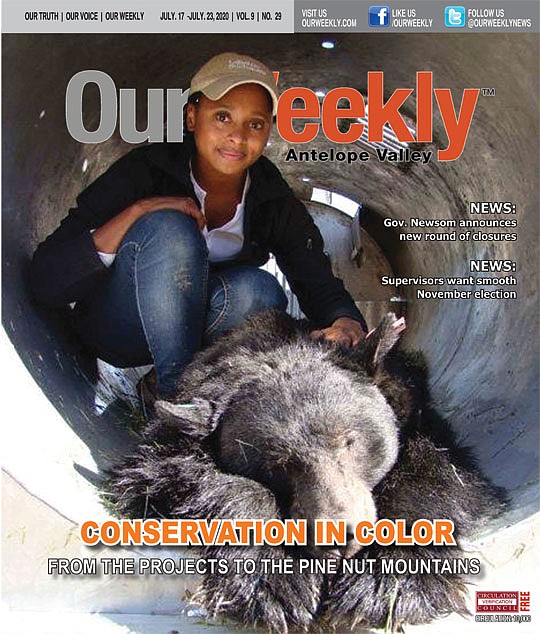 “I’ve been so blessed to be able to pursue a career like the one I have. One thing that’s important for me to communicate is that it’s not all fun and games. Wildlife and wild places are facing extinction, so the work my colleagues and I do is mission-critical.”

Once upon a time in the west, there lived a little girl in a concrete jungle in a big city.

“We lived across the street from the housing projects in a neighborhood that (when I was young in the late 80’s) had many challenges typical of lower-income neighborhoods,” Rae Wynn-Grant remembered in a recent Our Weekly interview.

There were many such jungles in many big cities across the country, and many such girls in them. But this little girl dreamed of dramatically different environs due in no small part to the television programs she watched.

“Seeing nature on television made me want to become a nature show host very early on,” she remembers.

These aspirations were quite logical for an impressionable child with little knowledge about the realities of the grown-up world. Most of us outgrow our youthful flights of fancy, but Rae remained steadfast to her passions, a commitment she deems essential to achieving any substantive goals.

The city was San Francisco (the Fillmore District, specifically), and the little girl grew up to become Rae Wynn-Grant, Ph. D., officially a special director for The Explorer’s Club and a member of the board of governors for the Society for Conservation Biology. Most recently, she entered into a Fellowship at the National Geographic Society to promote carnivore conservation.

Wynn-Grant studies the relationships between large carnivores and human beings as they interact in the earth’s increasingly small landscape.

The road to these lofty pursuits was long and arduous, with a fair amount of adversity and challenges along the way. The least of which were her struggles with math and science, essential for her career of choice.

A promising classical pianist and vocalist, she hovered between the two disciplines as she approached her high school graduation.

“When it was time to apply for college, I found myself torn between pursuing college and auditioning for conservatories,” Wynn-Grant recalls. “I did a few auditions, but ultimately decided to go forward with science at a traditional college.”

Even then, her first tentative steps were impeded by a lack of mentoring or role models she could identify with.

On the plus side, being the offspring of folks in non-traditional occupations may have broadened her outlook on her possibilities. Both her father, an architect, and her mother, poet Toni Wynn (http://toniwynn.com/), encouraged her pursuit of this novel undertaking.

With the end of her secondary education, her adventurous side led her to seek out a locale far from her California roots. And so it was that the west coast city girl segued cross country to Emory University in Atlanta, Ga.

The road to her life’s calling remained elusive and uneven, however, and her tentative courses in science failed to ignite her curiosity in this stale, static, scholastic setting, as she remembers.

“It wasn’t very exciting to learn about the natural world through the pages of a textbook or in-class lecture,” she recalls.

“There were few, if any, classes that focused on wildlife. So I challenged myself with a study abroad experience that completely changed my life.”

—Wynn-Grant on her first years as an Environmental Science major

Fortune smiled in the form of a chance to study abroad in a wildlife management program. Once again the aspiring naturalist packed her bags, this time for the Motherland of southern Kenya. Living among the indigenous Maasai people, she became fluent in Swahili, a language common in Africa’s “Great Lakes” region of the Congo, Kenya, Malawi, Rwanda, Tanzania and Uganda. Maa, the common language spoken by the Maasai is rapidly being replaced by the use of English and Swahili.

The presence of an African-American woman, the first they had ever met, proved to be an eye opening experience for her hosts. They were curious about life across the ocean from the perspective of a person of color, and especially incidents like Hurricane Katrina and the plight of those caught in that maelstrom.

“We lived in a camp, mostly outdoors, and studied African wildlife with Black African professors. This was my first notable experience in nature.”

Her first trek into field work was supervised by native African cadre, another first, and this mentoring opened her eyes to the possibilities of a career studying the animals that fascinated her, especially the study of lions in eastern Africa and chimpanzees and gorillas in the Congo.

“I was absolutely hooked,” Wynn-Grant says, “…and my career was launched from that one experience.”

This experience stayed with her upon her return to the United States to complete her Bachelor of Science degree from Emory, and on to the graduate program in Environmental Studies at Yale University. By this time another opportunity presented itself, this one being the prospect of researching lions in Tanzania to build upon the experiences forged during her earlier expedition.

Moving on to the doctoral program at Columbia University and transitioning to the study of North American carnivores, allowed Wynn-Grant to note the differences and similarities between different specimens on these two separate continents.

Since then, her career has taken her to Montana and the Western Great Basin to study Grizzly Bears and the Pine Nut Mountains of Nevada to study American Black Bears.

Throughout all this study and travel Wynn-Grant notes a commonality, in that human intrusion into areas previously the exclusive domain of large carnivores increases the probability of interspecies conflict.

Angelinos are largely aware of this problem, via the well documented episodes of bears (and occasionally mountain lions) trespassing on neighborhoods in outlying areas, particularly those with swimming pools and unsecured garbage containers.

Another concern is the impact of global warming; a well-documented climate phenomenon which scientists say has impacted the biological rhythms of animals, i.e. shortening the hibernation routines of bears.

Prepping for the future

“If we lose bears, lions, whales, birds, bees, fish, etc we’re going to have some extreme ecological consequences that will impact our planet.”

Today, Wynn-Grant juxtaposes her field research with tenure as a visiting lecturer and professor at Arizona State University, Columbia University and Johns Hopkins University. As a public speaker and media commentator, she is an in-demand guest on the American Museum of Natural History, National Geographic, and PBS. In addition, she remains a committed advocate for the inclusion of new and non-traditional newcomers to challenge the perception of what a scientist looks like in the public psyche.

“I’d love to see more people, especially more people of color work in this field as we need all kinds of brilliant minds working to solve these critical problems.”

When not gallivanting across the wilderness, Wynn-Grant lives in the urban boondocks of New York City with her husband and daughter.

For more on this amazing trailblazer, visit: https://www.raewynngrant.com/.