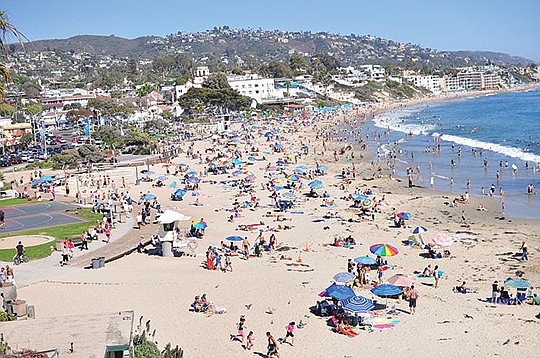 Los Angeles County beaches will be closed to the public over the Fourth of July weekend, and all fireworks displays will be banned, in an effort to prevent large gatherings that could lead to spread of the coronavirus.

The announcement came on a day the county announced a single-day record 2,903 new cases of COVID-19 and warned that spiking numbers of cases could soon overwhelm area hospitals.

“Due to rising COVID-19 cases all (county) beaches will be closing again temporarily this weekend, July 3rd through 6th,'' County Supervisor Janice Hahn wrote on her Twitter page. “We had almost 3,000 reported cases just [Tuesday]. We cannot risk having crowds at the beach this holiday weekend.''

According to the county, all beaches, piers, parking lots, beach bike baths and beach access points will be closed beginning at 12:01 a.m. Friday and continuing until 5 a.m. Monday.

Los Angeles County Sheriff Alex Villanueva issued a statement following the county's order stating the department “will enforce parking closures and traffic on Pacific Coast Highway during the holiday weekend for areas that fall within our jurisdiction.

“As we have done since the beginning of the pandemic, we will continue seeking voluntary compliance and educating the public.''

The statement made no mention of deputies being used to move people off beaches.

Villanueva later told Fox11's Bill Melguin, “We were not consulted on the beach closure... we will not be enforcing (the beach closure) because we are “Care First, Jail Last.''

The department's Lost Hills Station announced on social media that the county order “makes it illegal to trespass at these locations and is punishable by law to include, but not limited to, a $1,000 fine.''

Beaches were closed at the onset of the coronavirus pandemic, but were later reopened for active uses only. On June 11, they were opened for more passive uses like sunbathing.

Fireworks displays will also be banned over the holiday weekend.

“Closing the beaches and prohibiting fireworks displays during this important summer holiday weekend was an incredibly difficult decision to make, but it's the responsible decision to protect public health and protect our residents from a deadly virus,'' county public health director Barbara Ferrer said in a statement.

“The Fourth of July holiday weekend typically means large crowds and gatherings to celebrate, a recipe for increased transmission of COVID-19.''