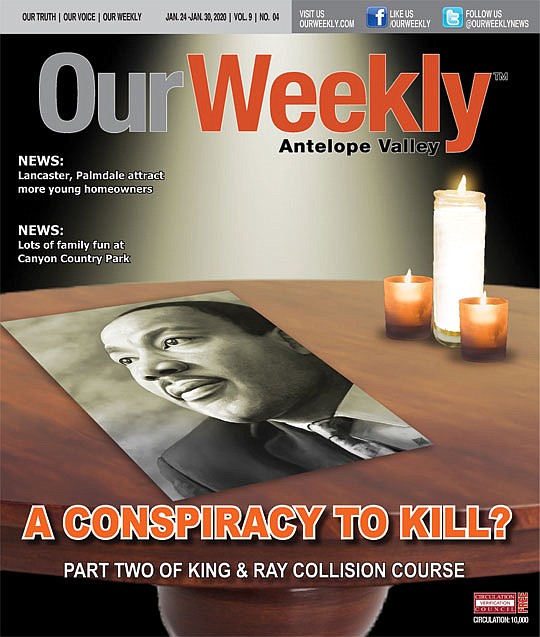 “I have always believed that the government was part of a conspiracy, either directly or indirectly, to assassinate Dr. Martin Luther King Jr.”

Right up to his demise, Dr. Martin Luther King Jr. had been in a jovial mood as he anticipated the evening meal “...of prime rib roast and soul food such as chitterlings, greens, pig’s feet and black eyed peas…” prepared by the Rev. Billy Kyles’ wife.

A creature of habit, he believed in dressing for dinner, and like many Black men, he used a sulfur-based depilatory cream as a daily shaving ritual. The good-humor continued with a mock pillow fight with Andrew Young and others, right up to the moment he put on his coat and stepped outside to be driven to his last supper.

“JONES stated while he was still looking at Dr. KING he heard a sound which he thought was a firecracker. Dr. KING feIl to the floor of the walkway in front of Room 306. At this-- point JONES could see blood coming from Dr. KING, and realized the sound was actually a shot rather than a firecracker.”

—from the FBI report on the assassination.

In the aftermath of King’s shooting, Ralph Abernathy, Jesse Jackson, Young and others rushed to his side, some of them pointing to where they believed the shot came from, a rooming house on the second floor of Jim’s Grill, some 200 feet away.

King’s Memphis chauffeur, one Solomon Jones, maintains that the shot came from a large overgrowth of bushes between the rooming house and the motel. This brushy area was cut down the day after the assassination, along with a tree branch, which obstructed the line of sight between where the shooter allegedly was and the balcony where King stood. Jones was in the motel parking lot below King when the shot rang out, and reported seeing a man running away from the area. In Jones’ words “…he could not tell whether the person was Negro or White.”

By this point, Jones was in a state of shock, and was placed in a motel room to recover.

King was rushed to Memphis’ St. Joseph’s hospital accompanied by Abernathy and close associate Bernard Lee, where he was pronounced dead an hour later (at 7:05 PM). The consensus was that he died instantly from the 30.06 cartridge (nicknamed the “thirty-aught-six”), a mainstay of the U.S. Army for much of the 20th century, and a favorite of deer hunters to this day.

The chief surgeon at St. Joseph’s was one Dr. Breen Bland, who was also the family physician for the family of Russell Adkins, who in turn headed up the Memphis faction of the Dixie Mafia. Years later, a story emerged about events that transpired upon King’s arrival at the hospital by activist/attorney/journalist William F. Pepper.

Pepper became close to King in the last year of his life, when the latter was galvanized by Pepper’s photo essay “The Children of Vietnam,” in the January 1967 issue of the radical magazine Ramparts. Pepper had been prone to believe the official conclusion until he was swayed by King’s closest associate, Abernathy, who urged him to meet with the assassin of record, James Earl Ray. Over the next 40 years and through the publication of three books, Pepper sought to exonerate Ray.