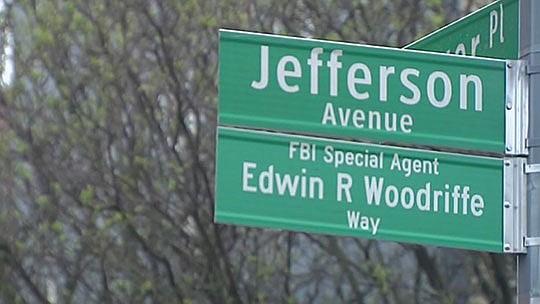 Fifty years after Woody Woodriffe's family suffered great tragedy, there is now a lasting tribute in New York City. The corner of Jefferson Avenue and Claver Place in Brooklyn is now known as FBI Special Agent Edwin R. Woodriffe Way, reports Fox News. The honor was bestowed upon Woody’s father, who was the first Black FBI agent to be killed in the line of duty. Edwin and his partner Anthony Palmisano were gunned down in pursuit of a robbery suspect in 1969. At the time of his death, he was just 27 years old. Woody was six and his sister, Lee, was five. Edwin's story began in Brooklyn as the third and youngest son of immigrants from the island of Trinidad. Then Edwin moved through St. Peter Claver School, Brooklyn Prep and Fordham University with a degree in accounting before joining the Federal Bureau of Investigation (FBI). “He will always be the kid from Brooklyn,” said Lee Woodriffe. “That is the place he loved, the city that he loved. That was the place that he one day, wished to return.” And that sparked Lee into action, with the idea of heralding Edwin’s return to Brooklyn with a street re-naming in his honor. The difficult process was made even harder by resistance from supporters of an accused anti-Catholic activist, but after two and a half years of struggle, the family found success. It came thanks to the support of the St. Peter Claver parishioners and church leaders. “We have finally made it here to this day,” said Father Cox, St. Peter Claver. “This is a day to hold up a great New Yorker, and a member of our Catholic community,” said Archbishop James Massa. As mentioned, Lee took the lead role, but Woody also spoke at the re-naming ceremony, revealing some of the FBI qualities that helped shape his life, even though he chose not to follow in his father’s “special agent” footsteps. “The thing that I remember most is the ideal he represented inside the family,” Woody said. “Lot of pressure being the son of the only Black FBI agent to ever be killed in action. Lots of eyes watching, lots of ears listening. I knew that I couldn’t create any negative family headline, I did not want to sully my father's name with any kind of dirt. So I did like he did. I went to Iona Prep (New York), I went to the University of Miami, I got a successful career. I feel blessed that my father’s sacrifice was a part of inspiring my sister and I to be the adults that we are today.”