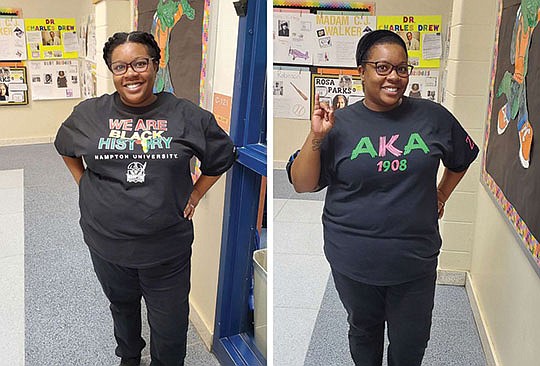 To celebrate Black History Month, a Virginia-based teacher is bringing history to life. “Good Morning America” did a feature story on Latoya McGriff, a first-grade teacher at Creekside Elementary School in Suffolk, Virginia, decided to dress up as a different African American historical figure every school day during Black History Month. “I decided to dress up for Black History Month so that the kids are actually seeing a live person from history,” McGriff told “Good Morning America.” “I just wanted to bring history alive for the kids.” McGriff, who has been an educator for 12 years, said that the majority of her school’s population is Black and she emphasized the persistent importance of representation within history.

"It is important for the children to see that people who look like them have made contributions because it reassures them that they can, too … It’s hard to believe in something you don’t see,” McGriff said. The different outfits are used as a conversation-starter, McGriff explained. The students will ask questions when they see them and will want to know more about the historical figure she’s portraying, she added. McGriff decided to also put a focus this year on African American historical figures local to Virginia. Her personal favorite has been Mary Jackson, who was a mathematician and an aerospace engineer for NASA in the 1950s and played a large -- and widely unrecognized -- role in sending the first astronaut into orbit. Jackson’s life was most recently portrayed in the 2016 blockbuster “Hidden Figures,” where she was played by Janelle Monae. “Mary Jackson personally influenced me because of her struggle,” McGriff said. “She was known as a human computer, yet she wasn’t even allowed in meetings because of the color of her skin and because she was a woman. Yet, she prevailed.” McGriff dressed as other well-known figures, such as Misty Copeland, Ella Fitzgerald and Barack Obama, but also gave recognition to those who are lesser-known, such as James Lafayette, a former slave turned spy during the Revolutionary War; Dr. L.D. Britt, the first African American doctor in America to have an endowed chair in surgery; and Thurgood Marshall, the Supreme Court’s first African American justice.