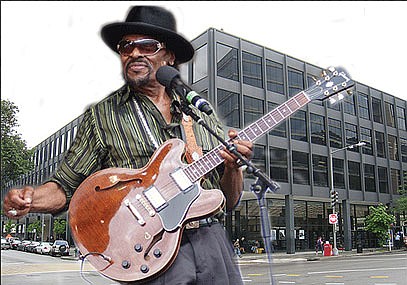 D.C. Mayor Muriel Bowser signed a bill into law on last week that go-go is the official music of Washington, D.C., amid widespread efforts to protect the gentrifying city’s Black culture, reports the Huffington Post.

D.C. Councilmember Kenyan R. McDuffie first introduced the legislation last year in response to the growing #DontMuteDC movement to combat the erasure of the city’s indigenous go-go music, which combines elements of funk, hip-hop, soul and other styles and is rooted in Black culture.

Donald Campbell, the owner of a Metro PCS storefront, said he was instructed to stop playing go-go music outside his store in the city’s Shaw neighborhood due to a complaint from a resident at a nearby luxury apartment complex. Go-go music has been playing outside that storefront, located on a block named after “Godfather of Go-Go Chuck Brown for decades. The music returned to the storefront thanks to the support of several local elected officials and a series of community-based demonstrations, rallies and the widely used #DontMuteDC hash tag on Twitter. The rallies to preserve the presence of go-go music outside the Metro PCS storefront are part of efforts to protect various aspects of Black culture in a gentrifying city.

Hopkinson, author of “Go-Go Live: The Musical Life and Death of a Chocolate City,” told HuffPost last year that there was still “a lot of work” to be done to empower Black youth and Black-owned businesses in the nation’s capital.

“Go-Go music is a creative force that has inspired generations of Washingtonians socially, culturally, and artistically, and this legislation will empower us to preserve and celebrate our native sound,” Bowser said in a statement.