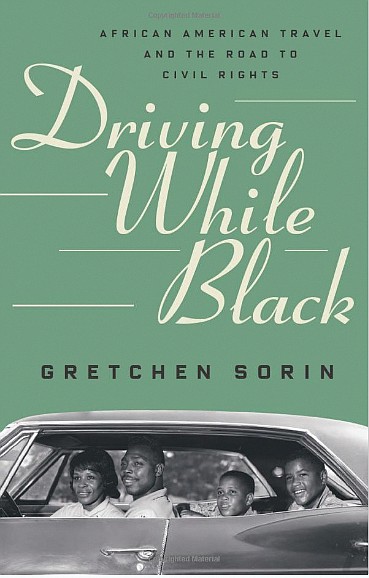 Keys in the ignition, rear view mirror’s been adjusted, steering wheel is set for maximum comfort. You’re ready to go, ready for this trip to get started. In “Driving While Black” by Gretchen Sorin (2020, Liverlight), you’re heading back in history.

Few things in America have altered the cultural scene more than the automobile. Not only has it changed the way we move, it affected the way we dress, talk, and eat. But, says Sorin, for Black folks, the automobile has “meant something different”--mainly, “the automobile made it more difficult… to enforce racial apartheid while cruising along the highways at forty-five miles per hour.”

Once was a time that Black people couldn’t travel far, if at all. Moving about from plantation to plantation allowed opportunities for slaves to escape or, at the very least, to learn the lay of the land, neither of which was desirable for a slave’s owner. Even free Blacks were restricted from too much movement then.

After the Civil War ended, former slaves began to head north for work and to escape Jim Crow laws, a Great Migration that didn’t preclude the occasional trip back South by rail or by bus to visit friends and relatives. There was still segregation in travel but the bigger fact was that travel itself was no longer restricted.

Starting around the 1920s, automobile ownership began to be a possibility for mobile (and upwardly-mobile) African-Americans. This meant even more freedom – a road could lead almost anywhere – but it could also mean danger, if you accidentally went where you weren’t welcome. On the other hand, you could sleep in the car, depending on the kind you bought; some vehicles were faster, and could outrun violence; others meant fewer fill-ups. Restroom stops, if you were Black, were still an issue.

By the 1970s, Sorin says, this was all mostly a moot point. The Civil Rights Movement had changed the country, and segregation at hotels and gas stations was a thing of the past. And yet today, once again, DWB comes with a whole different set of dangers…

Here it’s not even spring, and you already know where you’re going on vacation this year. If you haven’t packed a book yet, “Driving While Black” is the right one to take.

You won’t be sorry if you travel with this travel-history book. Author Gretchen Sorin’s all-encompassing in her information, beginning with slavery and moving at a good clip into the 20th century with, like any decent roadtrip, a few side-stops along the way. If this seems like old news, it’s not: Sorin also shows us things we don’t often consider, including tales of Black musicians’ reliance on freer travel, how sports were changed by fewer restrictions, and how Black drivers accidentally taught white business owners a lesson or two.

Sorin even adds personal anecdotes to the openings of her chapters, making “Driving While Black” a great vacation (or anytime) read. If you’re needing a smart, comprehensive look at the history of travel, grab it and buckle up.