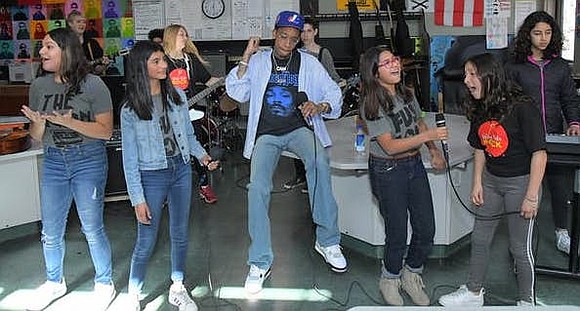 “Learning from award-winning recording artists like Wiz means the world to our students and inspires them to keep working towards fulfilling their dreams,” said Eliot Arts Magnet Academy Principal Lori Touloumian. “We are incredibly grateful to Little Kids Rock for bringing these once-in-a-lifetime opportunities to our students and encouraging their endeavors in music education.” Added Wiz Khalifa: “Music has always been a huge part of my life. I want to make sure that the kids of today’s generation get the same if not better opportunities that I got. It has been great to make this happen with Little Kids Rock.”

After he wrapped his “Decent Exposure Summer Tour” with French Montana, Moneybagg Yo, Chevy Woods, and DJ Drama, he recently dropped his seventh mix tape entitled, “It’s Only Weed Bro.” He’s also been making a name for himself as an accomplished actor. In addition to his turn as the character of Death in Apple TV plus’ “Dickinson” (which was released in November of 2019) he’s also scheduled to make a guest appearance on Fox’s animated series “Duncanville.”

Little Kids Rock was founded in 2002 and has reached more than 950,000 students with more than half a million kids currently participating in partnered programs nationwide.