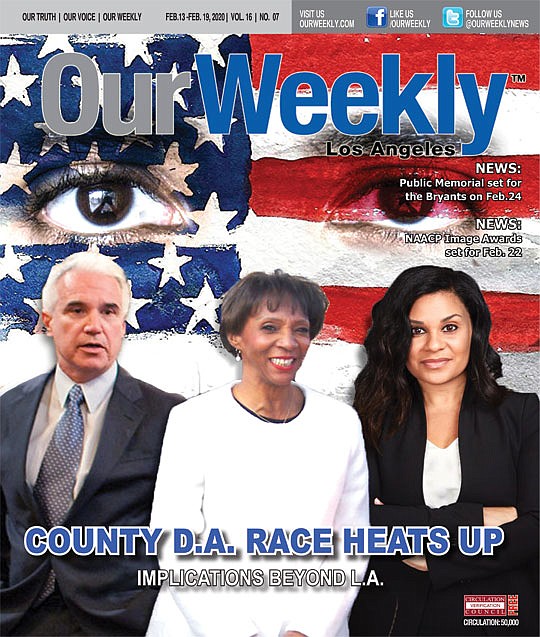 To be sure, the incumbent had her supporters, many of them deputy D.A.s, to counter her detractors, cheering “We love you, Jackie.”

As in every political contest, an expected series of condemnations and disapprovals were exchanged. Lacey, the self-proclaimed progressive, has assembled a record of 22 people convicted and placed on death row during her tenure, none of them White. Broken down by ethnicity, they comprise13 Latinx, eight Blacks, and one Asian defendant (Our Weekly was not able to obtain individual names of all convicts before this article when to press). Lacey countered by explaining that she only seeks capital punishment under what she called “egregious” situations (2 percent of the cases coming before her), as with Gabriel Fernandez, an 8-year-old who was tortured then beaten to death by his mother and her boyfriend.

The evening continued as the lead prosecutor listed her accomplishments such as initiating a Mental Health Division to divert the psychologically impaired out of the criminal system, a Human Sex Trafficking Section under Deputy D.A. Jane Creighton (one of her staunchest advocates) lauded for its success in convicting prostitution profiteers, and a Conviction Review Unit to exonerate the innocent.

Gascón acknowledged his opponent’s efforts in addressing mental illness, but claimed the unit woefully undermanned (initially starting off with one single staff member), further declaring she is out of touch with the times by fighting marijuana legislative reform and other initiatives. He additionally raked her over the coals for her failure to prosecute police malfeasance (to date she has only indicted one, Officer Clifford Proctor, for shooting and killing a homeless man. The charges were later dropped.)

Rossi contended that both are maintaining class disparity by not overhauling the cash bail system, which favors those wealthy enough to avoid incarceration prior to court trial. She accused Lacey of over-implementing gang enhancements as a method of criminal deterrence.

“The fact that our legal system has become so tolerant of police lying indicates how corrupted our criminal justice system has become by declarations of war, ‘get tough’ mantras, and a seemingly insatiable appetite for locking up and locking out the poorest and darkest among us.”

A former law enforcement veteran, speaking off the record, claimed that Jackie Lacey is “in lock-step” with the status quo, and a protégé of former D.A. Cooley.

Curiously, Lacey the incumbent and first African-American to hold this office, has attracted her share of detractors from the Black community, notably the international activist movement Black Lives Matter and its high profile founder Patrice Cullors. Even more perplexing is the fact that this same organization is endorsing a White Cuban former LAPD careerist (Gascón).

One person who lived through the criminal justice system and lived to tell the tale is Linda Gomez.

“At the age of 11, I was first incarcerated for possession(and ) conspiracy to sell,” she said. This was the start of what she calls her “vicious cycle,” leading to her conviction (as an adult) at 17 and a stretch at the Central California Women's Facility in Coachella.