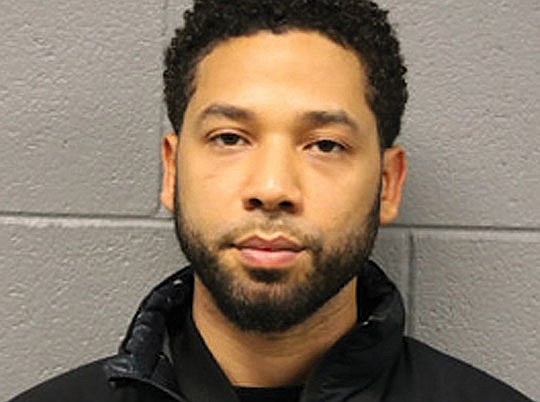 A grand jury returned a six-count indictment, accusing actor Jussie Smollett of lying to Chicago police, a special prosecutor announced Tuesday, according to USA Today and multiple news source. Smollett faces six counts of disorderly conduct, charging the actor with making four separate false reports to Chicago Police Department officers “related to his false claims that he was the victim of a hate crime, knowing that he was not the victim of a crime,” special prosecutor Dan Webb said in a statement. Smollett’s arraignment is Feb. 24 in Chicago. The charges stem from Smollett’s assertion that he was the target of a racist and homophobic attack in January 2019. Webb's statement said that he has concluded that further prosecution of Smollett is “in the interest of justice,” noting the State’s Attorney's office found at the time of the indictment that the evidence against Smollett was “strong,” and that the office hasn’t identified any new evidence that would have changed its view. The special prosecutor's statement also said the investigation into the Cook County State’s Attorney’s office over questions of wrongdoing is ongoing. The State’s Attorney’s office declined to comment. Smollett’s attorney, Tina Glandian, released a statement saying the new charges call into question the fairness of the investigation. “This indictment raises serious questions about the integrity of the investigation that led to the renewed charges against Mr. Smollett, not the least of which is the use of the same CPD detectives who were part of the original investigation into the attack on Mr. Smollett to conduct the current investigation, despite Mr. Smollett’s pending civil claims against the City of Chicago and CPD officers for malicious prosecution,” she said. Glandian continued that “the Office of the Special Prosecutor has not found any evidence of wrongdoing whatsoever related to the dismissal of the charges against Mr. Smollett. Rather, the charges were appropriately dismissed the first time because they were not supported by the evidence.” Smollett originally was indicted on 16 felony counts of filing a false police report, but prosecutors in the Cook County State’s Attorney’s office abruptly dropped the charges, angering police and City Hall officials and leading to the appointment of the special prosecutor to investigate. The actor told police that his attackers yelled homophobic and racist slurs at him, threw liquid on him and draped a noose around his neck, alleging they screamed “This is MAGA country,” a reference to President Donald Trump’s 2016 campaign slogan. But after several weeks of investigation, Chicago police claimed that he made the whole thing up, hiring two brothers to pretend-attack him in order to boost his profile and paycheck on the Fox show “Empire.”