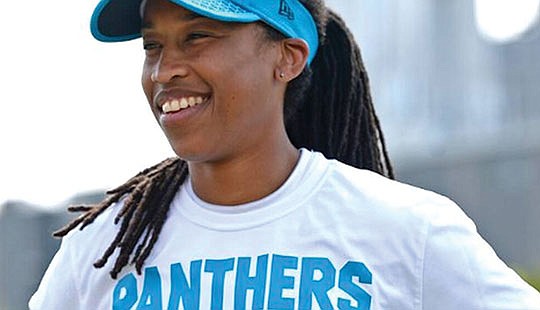 Washington Redskins Coach Ron Rivera is working on hiring the NFL’s first full-time female African American coach, a person with knowledge of the situation said Saturday, reports the Washington Post. Jennifer King, the former coach of the Johnson & Wales University women’s basketball team in Charlotte, worked as a coaching intern for Rivera with the Carolina Panthers the past two summers and has been working as an assistant coach on the Dartmouth College football team. The move could happen as soon as next week. The Redskins’ interest in hiring King was first reported by the Athletic. King, who played softball and basketball at Guilford College in North Carolina, also played in the Women’s Football Alliance, winning a national championship with the New York Sharks. As a basketball coach, she led Johnson & Wales to a U.S. Collegiate Athletic Association national championship in 2018. She said on the Carolina Panthers’ website that during that year’s Pro Bowl, she met Rivera at a forum meant for women to establish those types of connections with the league. He invited her to speak to the team and eventually invited her to be a coaching intern. In 2018 she worked with the Panthers wide receivers. Last summer she assisted running backs coach Jake Peetz, even taking over the group for a brief time that summer when Peetz’s wife had a baby. “I was kind of timid at first, but then I noticed some things I was seeing I would hear somebody else tell them later,” King told the Panthers’ website during her first summer with the team. “I was like, ‘I guess I should have shared that with them.’ I think the relationship with the players has been great. Our receiver room is a bunch of guys who are really hard working. I think they are going to surprise a bunch of people this year because I think every position has talent and can really do some things.” King said she is friends with San Francisco 49ers assistant Katie Sowers, who last week, became the first full-time female assistant coach in the Super Bowl. “This is an untapped source. There’s a lot of forward thinkers in this room,” Rivera told attendees at a women’s career in football forum last week. “We’re in a production-based business. It’s all about winning, and we’ve got to create that opportunity to win. It doesn’t matter who you are — if you bring something special to the table and help us, we most certainly want you.”